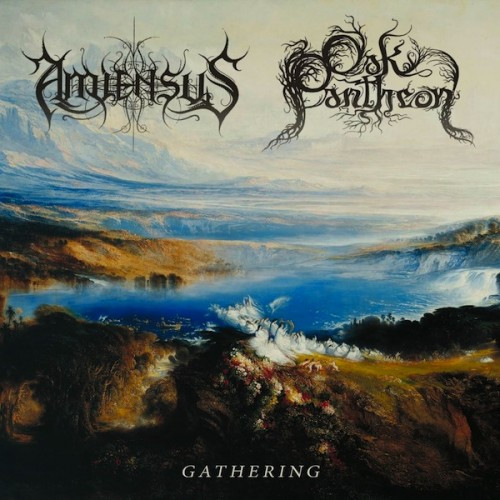 Amiensus and Oak Pantheon are two Minnesota bands we watch closely at this site. Both of them produced debut albums in 2012 that we praised in our reviews — Restoration by Amiensus (reviewed here) and From A Whisper by Oak Pantheon (reviewed here). Both of them can be considered black metal bands, but both of them have incorporated so many other musical elements that diverge from the Scandinavian orthodoxy that one day we will have to concoct a new genre name for what they are doing. “American black metal” isn’t specific enough, and although both bands come far closer to Agalloch than they do Marduk or Taake, “Cascadian black metal” isn’t right either.

While we continue to ponder just what shorthand to use in describing what each of these bands are doing, we can now consider their latest creations, which come conveniently packaged together in a new forthcoming split release entitled Gathering. Before I heard a note, I had a good feeling, because both the main album cover (“The Plains of Heaven”) and the alternate cover (“The Great Day of His Wrath”) were crafted from 1849 paintings by John Martin, and that just exudes good taste, as does the decision to have both tracks mastered by Arsafes (Kartikeya, Above the Earth) (and he mixed the Amiensus track too). Those good feelings proved to be prescient, because both bands’ contributions to the split are stellar. 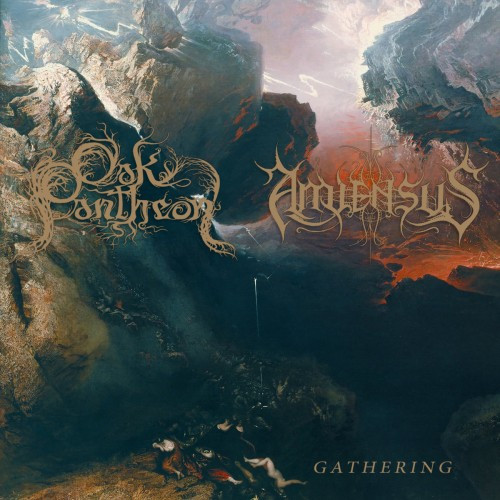 Of the two songs on the split, “Arise” by Amiensus is the more ambitious. At nearly 10 minutes in length, it makes room for a musical journey that deserves the word “epic” and encompasses much of the variety that was on display in Restoration. Beautiful sombre melodies unfold through the use of both acoustic and clean electric guitars as well as clean vocal harmonies, yet the song also hits hard with passages of ravaging power, with jolting pneumatic riffs, thundering bass lines, blasting drums, harsh razor-edged rasps, and deep roars. Along with attacks of black metal aggression, it includes elements of melodic doom reminiscent of Swallow the Sun as well as melodic death metal. But rather than coming across as a conscious pastiche of divergent styles, the song is a coherent whole, and a dramatic display of the band’s talent for making emotional connections on many levels. With “Arise, Amiensus set their sights high, and they hit the bullseye.

Oak Pantheon’s contribution to the split — entitled “A Gathering” — was originally an unreleased track from the From A Whisper sessions that the band re-wrote for this split. I’m really glad they found a way to get this song out into the world, because it has rapidly become one of my favorite songs they’ve released to date. At the risk of giving the wrong impression about the song, to my ears there’s an almost post-punk vibe in the music and a pop sensibility in the songwriting — it’s got a hard-rocking beat and a tremendously infectious melody. But have no fear — you’ll never hear this on mainstream radio, not with vocals that sound like a wolfpack on the hunt or the layers of distortion that shroud the riffs or the song’s big howling storm of a finish (introduced by a very cool melodic guitar bridge). As hooky as the song is, it’s still satisfyingly extreme.

Anyone who has been following Oak Pantheon from their first EP in 2011 (The Void) through their last single (“Together We Ride” from earlier this year) knows that their interests are so diverse and their talents so impressive that pigeonholing them is probably a fruitless task, and “A Gathering” will probably make that task even more difficult. But who cares what you call it? “A Gathering” is just a great song and it makes for a wonderful complement to the Amiensus song on the split.

Gathering will become available on Bandcamp as a “name your price” digital download on November 5, 2013, and it will also be available on a slipcased CD for $6. The bands will have a limited number of CD copies for sale on their own Bandcamp pages and another 100 will be available from Tridroid Records (based in St. Paul, MN). Pre-orders can be placed now via the links below.

And now we’ve got the good fortune of being able to give you an exclusive preview of the split. Through the following teaser, you can hear one minute from each of the two songs, with the Amiensus excerpt coming first. Enjoy.

21 Responses to “AMIENSUS AND OAK PANTHEON: “GATHERING” (A Review and a Musical Preview)”