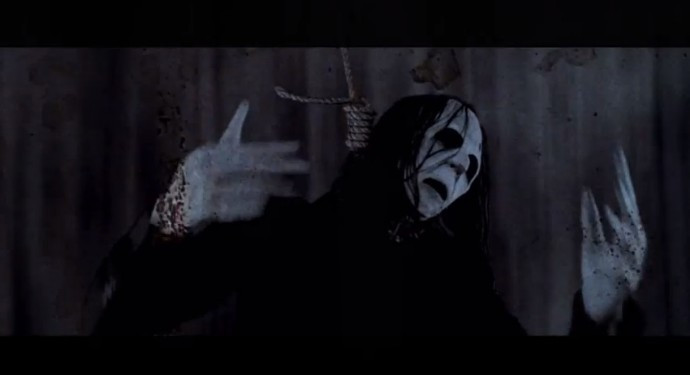 Not long ago Australia’s Portal released a new official music video for the song “Curtain” from their tremendous 2013 album Vexovoid. It was produced by Panorama Programming and directed by Zev Deans, who drew inspiration for the video from Edgar Allan Poe’s poem “The Conqueror Worm”.

And the video really is inspired. “Curtain” is a horrifying assault of blackened death metal, thoroughly inhuman, oppressive, and doomed in its atmospherics. The video matches the music in its hopelessness and its ominous obscurity. You can watch it after the jump, and I thought it might also be interesting to include the text of Poe’s poem, too.

Lo! ’t is a gala night
Within the lonesome latter years!
An angel throng, bewinged, bedight
In veils, and drowned in tears,
Sit in a theatre, to see
A play of hopes and fears,
While the orchestra breathes fitfully
The music of the spheres.
Mimes, in the form of God on high,
Mutter and mumble low,
And hither and thither fly—
Mere puppets they, who come and go
At bidding of vast formless things
That shift the scenery to and fro,
Flapping from out their Condor wings
Invisible Wo!
That motley drama—oh, be sure
It shall not be forgot!
With its Phantom chased for evermore
By a crowd that seize it not,
Through a circle that ever returneth in
To the self-same spot,
And much of Madness, and more of Sin,
And Horror the soul of the plot.
But see, amid the mimic rout,
A crawling shape intrude!
A blood-red thing that writhes from out
The scenic solitude!
It writhes!—it writhes!—with mortal pangs
The mimes become its food,
And seraphs sob at vermin fangs
In human gore imbued.
Out—out are the lights—out all!
And, over each quivering form,
The curtain, a funeral pall,
Comes down with the rush of a storm,
While the angels, all pallid and wan,
Uprising, unveiling, affirm
That the play is the tragedy, “Man,”
And its hero, the Conqueror Worm.