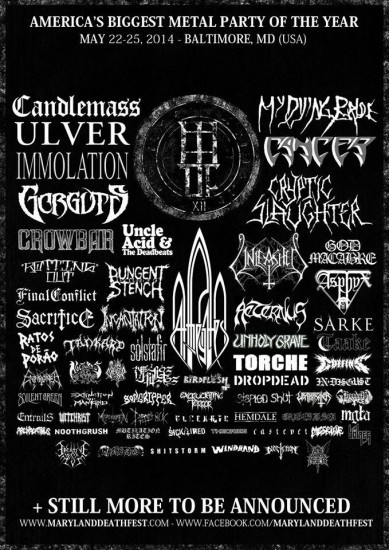 Talk about a Halloween treat: Today the MARYLAND DEATHFEST confirmed the appearance of 30 new bands at next year’s 12th edition of North America’s best extreme metal fest — bringing the total to 63. And even that fairly recent flyer up there is still incomplete. Check out this list of the names announced today:

Fucking ridiculous. And when you see the full list of names announced so far, including this latest group, it just gets even more ridiculous:

And now I’m just going to copy and paste the rest of the information included in today’s announcement, from the MDF Facebook page:

3 stages, including the 2 main stages, will be located at 545 N. High Street (Edison Parking lot), which is 1-2 blocks from the old location of Sonar. The setup at the Edison space will eliminate a variety of logistical problems and will ultimately lead to a better experience for you at MDF next year. This space has an approved capacity that is significantly higher than what we’re used to, we can open the entrance 2 hours before the first band each day, we won’t be getting in the way of the Farmers Market on Sunday, we don’t have to close off streets, and once again, we will have MORE space. In addition to adding more shaded areas, there is already existing shade here, so if it gets hot, you won’t be roasting on concrete all day. As far as parking goes, there is an enormous parking lot next to the space we’re using that you’ll be able to park at, and as always, metered parking is possible under the highway that everyone is familiar with from previous years.

On Friday-Sunday, once again, we are doing a grind/hardcore/punk/crust stage at Baltimore Soundstage, located across the street from Rams Head Live at 124 Market pl. Unlike last year, bands will play here all day/night and there won’t be any large gaps between bands.

Generally speaking, this setup was the most sensible solution for us, as it allows us to book a lot of bands, give bands respectable set lengths, eliminate many issues/concerns from last year, and keep the fest close to hotels and other downtown conveniences that everyone is used to.

As early as next week, we will break everything down so you know who is playing where. We will also announce more bands at that time. We still have a few up our sleeve for the main stages, but mostly, we’re down to rounding out the Soundstage billing before being completely finished with booking.

The MDF website will be fully updated with the new band additions and venue info by the end of the day. A map that will help give you a better understanding of what you just read can be found here: http://www.marylanddeathfest.com/venues