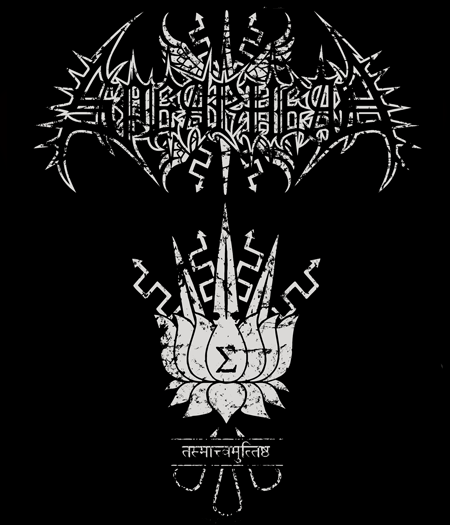 I own a standard fuckton of band shirt (not a metric fuckton, because who can understand metrics?). Last night I grabbed a shirt out of one of many mountainous piles before running off to a birthday extravaganza for a friend. The image above is what’s on the front of the shirt. I had no idea which band it was, I just thought it looked cool. Rough guess, I don’t know the names of the bands for 25% of the shirts I have. I knew when I bought them, but the logos for so many are unreadable that as time passes I just go blank.

I spent the night partying with a couple dozen people, not one of whom was a metal head. At one point my shirt became the subject of a guessing game. There are words on the back. They say this:

The heavy burden of the earth thou justly cast to desolation, Kshatriya thou master of the ascesis of power. — Kshatriya 11.18-19.

These words meant nothing to anyone, including me (because I had forgotten their meaning). And then someone had a Eureka! moment and guessed the logo . . . Spearhead!

And of course that’s exactly right. Afterward, it seemed so obvious. I bought the shirt from the Vault of Dried Bones about a year ago, and I see that they still have some of those shirts for sale, along with an LP version of Spearhead’s most recent album, Theomachia: The Doctrine of Ascension and Decline (2011), which was released by Agonia Records.

I came across Spearhead not long after that album was released more than two years ago. I listened to one song from it for one of my MISCELLANY posts, and then cheated (as I often do) and listened to the entire album. Here’s my summing up of the song and then the album:

The song I heard is called “The Lie of Progression”. It wastes no time jumping at you like a starving tiger on steroids, or some red-eyed, bat-winged thing diving straight for your head. It’s white hot mayhem on wheels, one riveting blast of furious riffage and brutalizing percussion after another. Definitely my kind of thing, and a nasty thing it is. . . .

. . . I cheated on the MISCELLANY rules, which I can do because I make the rules, and I listened to the rest of Theomachia. Sure glad I did, too, because the album is fantastic. The music sounds like Anaal Nathrakh, The Monolith Deathcult, and older Morbid Angel locked in a bar fight that has spilled out into mean streets. It’s vicious and war-like, fast and filled with an atmosphere of caustic menace. It relies in part on down-tuned tremolo chords and torrential waves of blast-beats, but convulsive death-metal rhythms also play a big role, segmenting the songs into massive hammer strikes of percussive force. Part of me wanted to cower in fear, part of me wanted to dive headlong into a mosh pit.

I’m a fan of the vocals on this album, too (the vocalist, Barghest, also plays bass). His expressive, mid-range assaults of vocal abrasion keep the music right on the lip of uncontrolled violence. But even when his venom-spitting proclamations are missing, as in the instrumental closing track (a blast of corrosive ambient metal called “Aftermath”), the music is no less powerful. This is a seriously badass album.

I haven’t listened to the album in more than a year, but the whole escapade with the shirt drove me back to it this morning, and yes — still seriously badass. Here are all but one of the album tracks, in order (I couldn’t find the one that’s missing). Also included below are the lyrics to the song “Kshatriya”. I hope 2014 will bring us a new Spearhead release.

Worker of divine will and mandate of heaven*
Kshatriya thou master of the chaos that thou art
Enduring the spear without agony
As the knightly horse who rarely feels the master?s whip

Attending to the only order timeless and unauthored
The sentry of his arms, who sees without sight
Servant of the hammer of eternity?s execration
With the blood-stained hands of a healer and a king – and a king

Attendees to madness, they who light the great black fire
Wherein one day nigh they will be cast
While the kshatriya lights the Self-ignited flame
To burn alive their hollow, craven hope of peace

Those ripe to bring ruin to the world of profane creation
Around whom such is an immortal silence born
A greater silence when the dawn of fire comes
Mere instruments of a boundless will divine
Thus spoke the sun: ?Tasmat tvam uttishta!?

The heavy burden of the earth, thou justly cast to desolation
Kshatriya thou master of the ascesis of power
Standing upon mountains, as the sorrowful look on in mourning
By a will transhuman, raise a prayer to total war

3 Responses to “A BACKWARD GLANCE: SPEARHEAD”