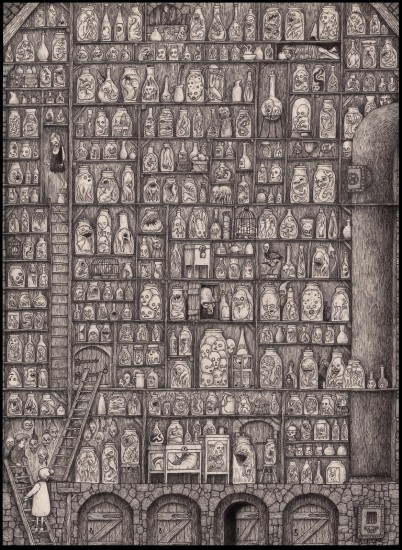 Greetings and salutations to one and all. It’s time for another edition of THAT’S METAL!, in which I collect photos, videos, and occasionally news items that I think are metal even though they don’t involve music (or at least not metal music). Actually, it’s way past time for another edition since the last complete one was three weeks ago. Having dragged my feet for so long, I’ve collected a large number of items for this installment. Here we go…

We begin with John Kenn Mortensen, a Danish writer and director of television shows for kids and himself a father of twins. In his spare time he makes drawings on post-it notes — those small sticky pieces of paper that people use to remind themselves of things that need remembering. Mortensen is not only a talented illustrator, he also has a dark, demented sense of humor and an occasionally Lovecraftian bent in his imaginings. His style is reminiscent of both Edward Gorey and Maurice Sendak (Where the Wild Things Are). The fact that he does what he does on post-it notes just makes everything more metal.

One example of his work is at the top of this post. Pay close attention to the jar on the right side of the lowest shelf (you can click the image to make it bigger). And here are other examples of Mortensen’s creations: 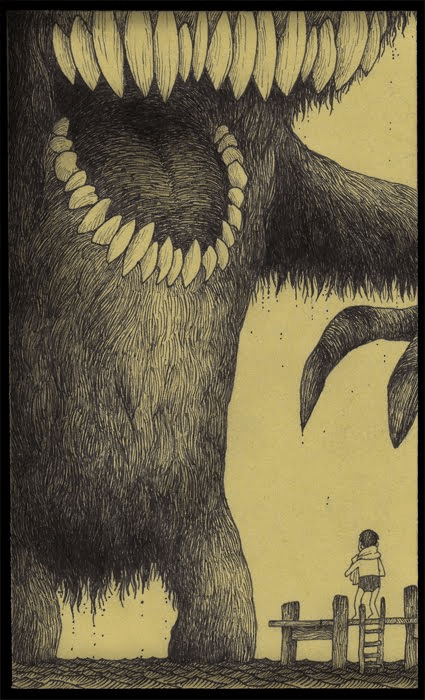 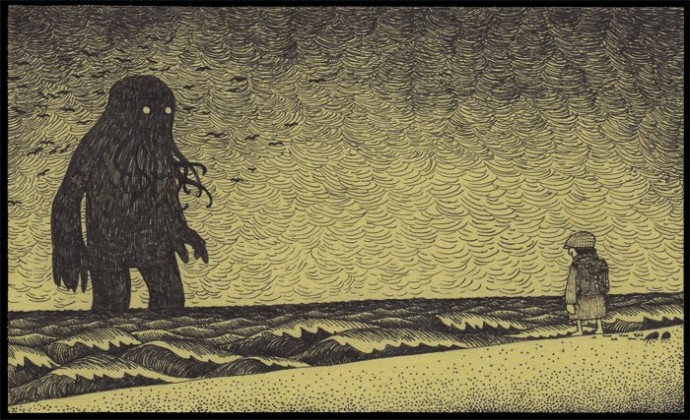 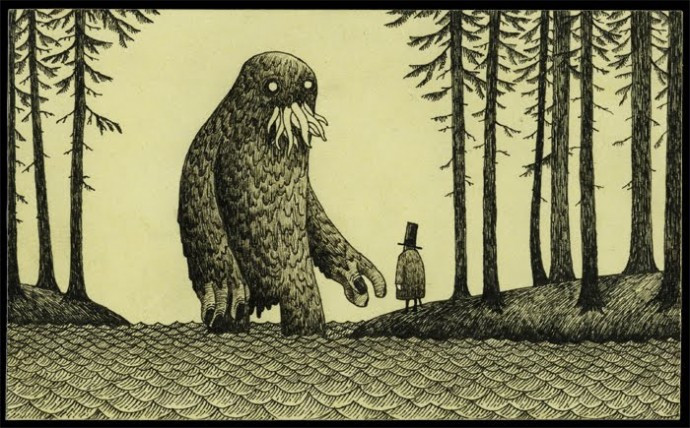 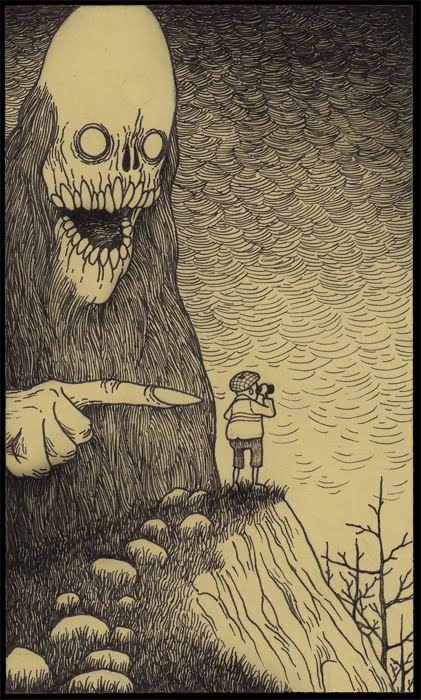 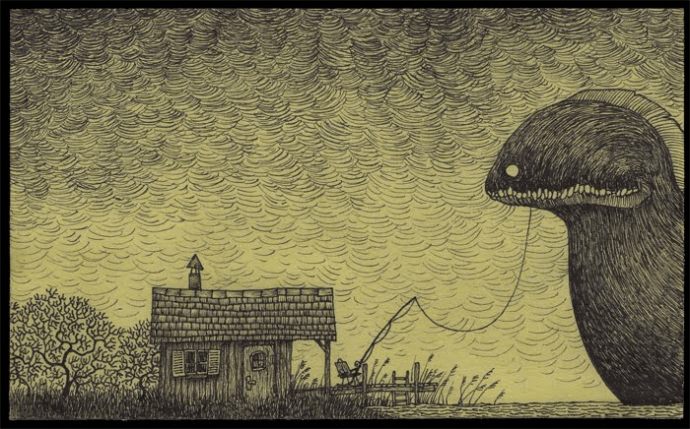 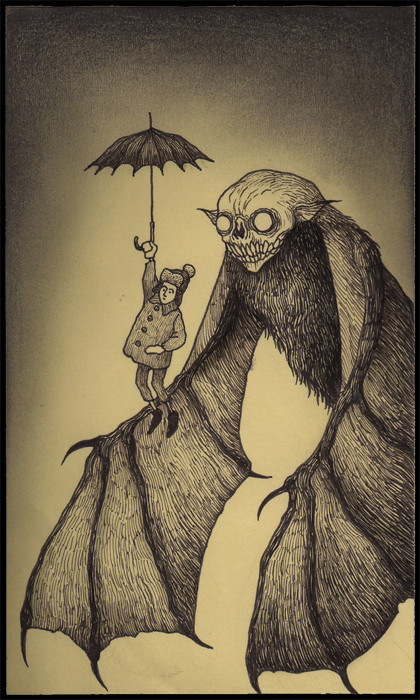 More Mortensen creations can be found on his blog and at this post at io9. Mortensen has collected his works in two books so far, and the widget below will allow you to look at one of them. 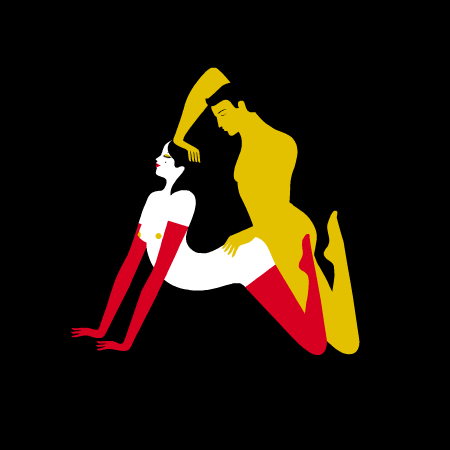 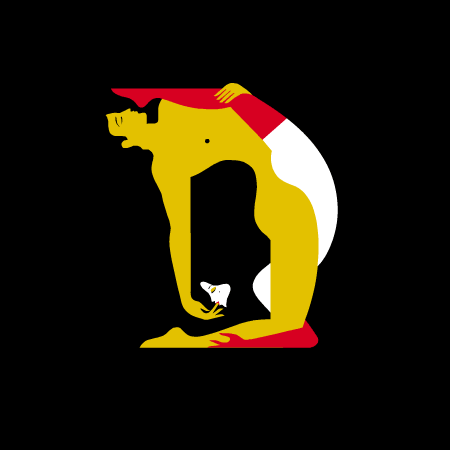 We’ll stay with hand-drawn art for one more item. This is a piece of performance art created by a group of underground subversives in Russia who go by the name Voina. One of their achievements was to paint an image on the underside of a drawbridge in Saint Petersburg. The bridges are raised at night, and very little time passes (less than a minute) between the moment when the bridges begin to be raised and when they’re . . . uh . . . fully erect.

One of those bridges is in front of the headquarters of  the Federal Security Service of the Russian Federation (FSB), which is the successor to the KGB and an organization that has been widely criticized for corruption and human rights violations. Here’s a photo of what Voyna painted on the underside of that bridge. The title of the work? Giant Galactic Space Penis (aka “A Dick Imprisoned by the FSB”). Hell yes. 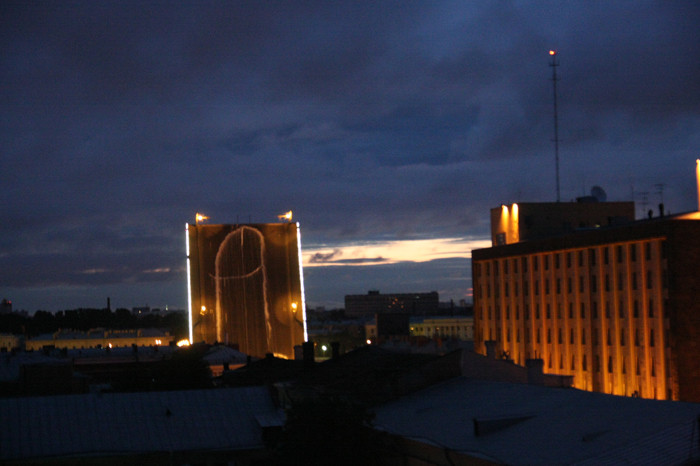 Some members of the Moscow faction of Voina split off to join the group Pussy Riot in 2011. You may remember that two members of that group were arrested and sentenced to prison for “hooliganism” based on their guerilla performance during 2012 at Moscow’s Cathedral of Christ the Savior, in protest of the Orthodox Church leader’s support for Vladimir Putin during his election campaign.

For our next item we turn to another Dane. Lars Andersen is a writer and artist in Denmark who became interested in historic archery techniques and has mastered them in a way that allows him to achieve eye-popping speed and accuracy. Here he is hitting three targets while riding on the back of a Harley:

Andersen has apparently learned ancient archery techniques used by the Saracens, Native Americans, Persians and other “bow-slingers of old”, and holds arrows in one hand instead of in a quiver, which he says helps enable him to be more instinctive and to shoot arrows while off-balance or jumping in the air. In the next video (with a weird voiceover), you’ll see him doing things like firing 10 arrows in 4.9 seconds, shooting 11 arrows in the air before the first one hits the ground, shooting faster than the Elven archer Legolas in a Lord of the Rings clip, and more. Pretty fuckin’ amazing.

For our next item we’ll stay with the subject of amazing athletic accomplishments.

Zach Hodskins is a 6-foot-4, 200-pound basketball player from Georgia who last month signed as a “preferred walk-on” with the University of Florida basketball team, who were 29-8 last season and made it to the Elite Eight at the NCAA basketball tournament before losing to Michigan. The amazing thing about Hodskins is that he was born without the lower half of his left arm. And yet he’s an amazingly accurate 3-point shooter, he can drive the lane for lay-ups, and he can pass the ball like lightening (and when he needs to make a left-handed pass, he whips it around behind his back with the only hand he has).

I’ve embedded two videos below, one a news feature that aired after Hodskins signed with Florida and the other an older, shorter “highlight reel” clip that has almost 4 million YouTube views. Definitely metal.

In a March 2012 edition of THAT’S METAL! (here) I included a video of Swiss pilot Yves Rossy flying in formation alongside two Albatross jets over the Swiss Alps. Yves was not in a jet himself. He was wearing a custom-built jet suit capable of traveling at speeds in excess of 125mph. Now we have a new Yves Rossy video. This one shows him using the jet suit to fly around Japan’s famous Mt Fuji. Stunning. 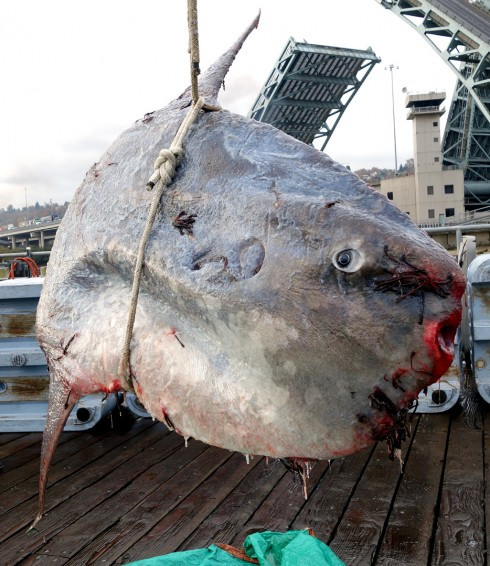 This next item showed up in the local Seattle newspaper on the last day of October 2013. It’s a photo of a giant sunfish (also known as a mola) that was caught by a tribal fisherman in a gill net in the waters of Elliott Bay, right in front of Seattle’s skyline. It was a bizarre occurrence for two reasons — first, because this kind of fish is not native to the waters of Puget Sound, though sometimes they have been found off the Pacific coast of Washington, and second, because . . . it’s just a fuckin’ bizarre looking creature!

The tribal fisherman didn’t really know what to do with this thing, but he had the ingenious idea of calling Michael Vassiliou, the owner of a restaurant on Alki Avenue Southwest named — conveniently — Sunfish Fish & Chips. “At first when he called me, I thought he was kidding,” Vassiliou said. But Vassiliou agreed to take delivery of the carcass.

The fish is apparently not edible, so it was iced down and put on display at the restaurant, where it attracted quite a crowd of galkers. One wonders why the fisherman didn’t just let it go. Maybe it was already dead. 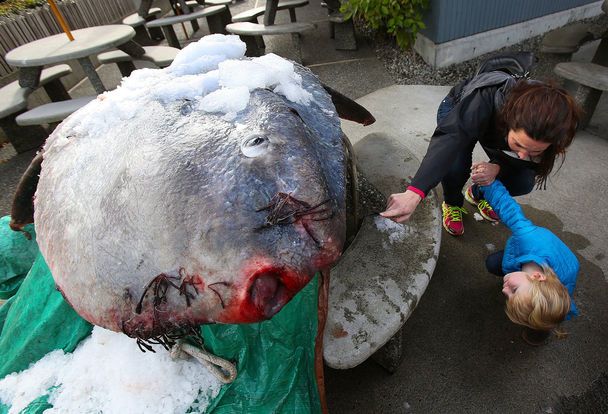 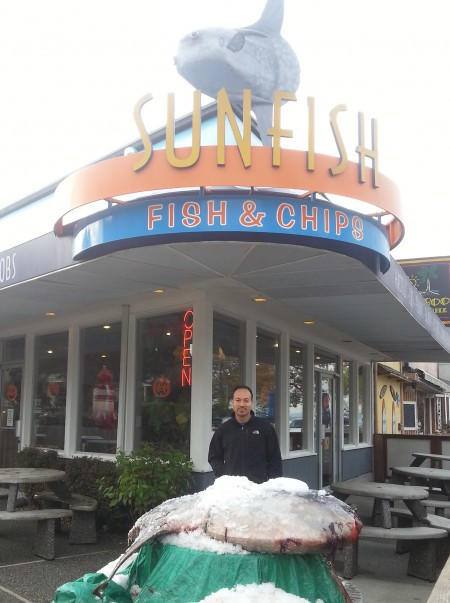 And next we have this: 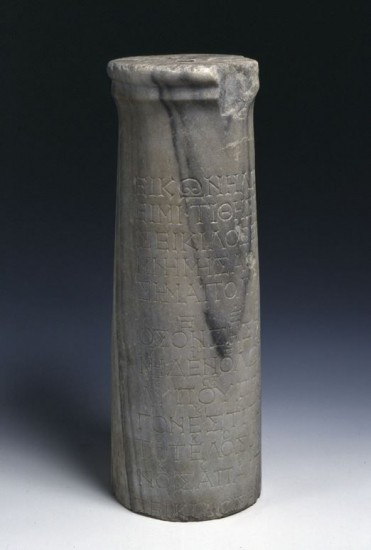 For our final item in this edition of THAT’S METAL! we present the oldest complete surviving song in the world — the Seikilos epitaph. To quote the article from which I lifted this item (thanks to a link from Andy Synn):

The Seikilos epitaph is the oldest known complete composition of music in existence, a Hellenistic Ionic song with complete notation likely inscribed in the first century AD. And its notation have allowed modern music scholars to play the song in the modern day.

Although there are certainly older musical texts and fragments, the very brief Seikilos epitaph is a complete song, found engraved on a tombstone near Aidin, Turkey, along with the inscription, “I am a tombstone, an image. Seikilos placed me here as an everlasting sign of deathless remembrance.”

The song also includes lyrics, and here they are, translated from the ancient Greek:

While you live, shine
have no grief at all
life exists only for a short while
and time demands its toll.

Below I’ve embedded two performances of the song. The first is performed with lyrics by David Creese, a Lecturer in Classics at Newcastle University, using a zither-like instrument called a “canon,” with eight strings and movable bridges. The second one is by Michael Levy, an ancient music researcher, without vocals, using his own version of an ancient lyre.

It should be obvious why this is metal — death metal, actually. (For more detail about the song and Creese’s performance, go here.)