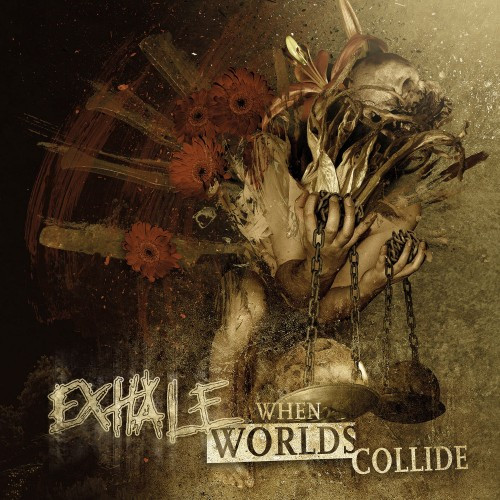 (Here’s DGR’s review of the new album by Sweden’s Exhale.)

When Exhale released the music video for “Wrath Unleashed” the band managed to worm their way inside my skull like no other managed to this year. Based on one furious, grinding, explosive blast of metal I found myself looking forward to Exhale’s release of When Worlds Collide… and then waiting… and waiting.

For being a minute and twenty seconds long, “Wrath Unleashed” has a way of grabbing you with its bony fingers and gripping your arm like a claw, then never letting go. Keep in mind, the video for “Wrath Unleashed” was uploaded to YouTube in late December of last year, so Worlds Collide has had a long time to simmer and get us hyped up about its forthcoming release. It’s rare that a band is able to hook someone like that on the strength of one song, so when Exhale managed to pull that off, I knew we would be in for something special.

Later releases of “Avsky” and “Machinery” would add fuel to that fire. Although initially difficult to find because it was on a sampler, “Avsky” promised more of that initial rush that was delivered via “Wrath Unleashed”, and it felt good. If the song could’ve been inserted into my veins then I’d probably still be riding that high. “Machinery” was the sort of song that hit like molten steel, sparks and everything ejected from it in every which direction. It was the sort of song (as I described it in my initial discussion following its release) that you put on in your car at full blast and then drive full speed into a wall. 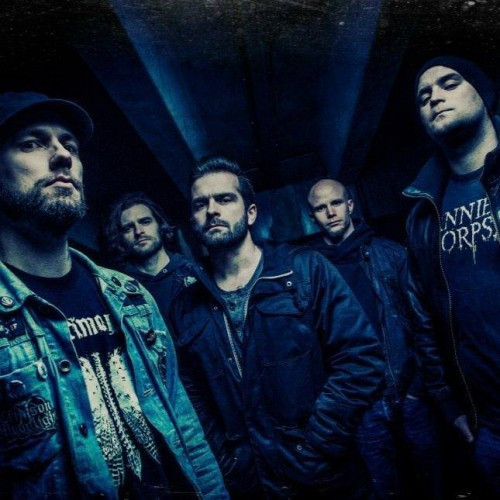 Armed with three promising songs, you can now see why we were chomping at the bit to hear When Worlds Collide, and now here it is, with some surprisingly long songs in tow. There’s even a closing track with a seven-minute run time, which was supremely interesting. After all the lead up to this disc, do Exhale manage to deliver the goods? Do they offer up that dose of grind and death metal that makes you want to subject yourself to violence? Do they actually get some mileage out of the longer songs on the disc? Are they able to extend them without just repeating themselves?

When Worlds Collide is a sharp, precise blade of a disc. It moves at an extremely fast pace from one calculated blast of violence to the next, allowing very few moments to slow down and actually take a breath. Everything on this album feels like the band choking the maximum amount of force out of everything they have written. Half of the album consists of songs under the one minute and thirty second mark and the other half are songs ranging from two to three, with the outlier being that closer with the way longer run time. The shorter songs are such expulsions of violence that it’s shocking houses aren’t destroyed after one of them blasts out of the speakers. The longer tunes see the band becoming that beautiful blend of death metal and grind, delivering exercises in absolute anger and brutality.

The song “Barriers Of Blood” is one of the few times when it feels like Exhale decided to give the listener a break, with it’s dirge-moving, bass-driven mid-section-to-the-end. It sticks out and breaks up the pace of the first batch of tunes, because from “Wrath Unleashed” to “Machinery”, with “Avsky” and “Apocalypse” in between, there is almost zero room to breath; the band are just pounding out blast after blast, making the two-minute and three-minute songs feel like the one that comes before them (“Wrath Unleashed”) and the one the comes after them (“Machinery”).

After “Barriers Of Blood” the band start to experiment, adding in the occasional slamming riff to get heads moving up and down – as opposed to the frantic flailing previous songs may have caused – and stretching out the lengths of certain tracks as well, giving a breather from the blasts. “Till Slakt” has one to close it out that bleeds into another slow crawler of an opening on the song “Glorify The Dumb”, although the band then quickly obliterate that bit so quickly that it becomes a distant memory shrouded in haze. It’s a dynamic the band make much use of. They’ll bring in a slower groove riff or a slow crawler and then just absolute destroy it with the next rapid-fire burst of guitars and blasts, like a target being shredded to dust by a gatling gun.

Exhale’s dual vocal attack, consisting of Martin Brzezinski on highs and Johan Ylenstrand on low duty, makes them sound like one of the angriest bands out there to date. They are both embedded within a blistering assault of grind and death metal heavy enough to crush things paper thin, and it sounds as if both of them are at war with the microphone. Martin’s manic, half-yelled, half-shrieked delivery makes Exhale sound like they picked up an insane person as a vocalist; he’s one of the few who sounds legitimately angry with everything surrounding him. He delivers verses at such a fast pace that sometimes it feels like there are so many words and so little music to work with that every syllable is another machine gun bullet expelled at super-high velocity.

Johan serves as the counterweight to Martin’s domination of the album’s vocal pieces by constantly punctuating everything he says, but bellowing it out. Occasionally challenging each other for microphone superiority, both men make Exhale an exceedingly intense experience, especially when you tack on the fact that Johan is also playing guitar alongside the whole experience. They’re probably at their most neck-breaking in the song “Machinery” for the whole eye-blink of time that song seems to take — although the whole opening section of When Worlds Collide has the two just tearing away at line after line.

Andreas Allenmark joins in on guitars as well. Both he and Johan have the ability to shift from riff to riff effortlessly, and the two of them have pulled off the extremely difficult feat of making each song feel very different; so many bands record songs in this genre that simply blur together into bigger movements. Exhale shift from full-blown brutal death to grind to the occasional hardcore pit riff, and back and forth, within milliseconds. The dual guitars even allow for the occasional lead to jump out amongst the constant whirling, buzzsaw guitar tone, and they also jump into some pretty undeniable grooves as well, all of which have weight behind them.

Longtime drummer Gustav Elowson makes sure that the band are always moving at a seriously fast clip, and the guy has some of the most ultra-precise blasts out there, eschewing the sloppier seeming, punk-drumming grind sound, so sound systems are just rattling the whole time. Also the part in “Illusions” where he makes the snare drum follow the vocals before each riff change is so fucking cool — it’s such a nice bit of flair in between all the screaming. Exhale could have been playing glacially slow doom riffs, but putting Gustav behind the kit would’ve made the band seem like they were playing “You Suffer”.

The production on When Worlds Collide is also super-clean, so you can pick up on the ultra low end of the bass as well, although it constantly follows the guitar throughout much of the disc, just making Exhale seem larger with each strum.

When Worlds Collide is another disc to add to the punching-through-walls stack that we’ve been building here at No Clean Singing, because for the amount of time that When Worlds Collide runs, Exhale are rage incarnate. Every riff on the album crashes into the listener with the force of a truck. The group continually show that they aren’t just a sheer grind band (although that’s clearly the core of the band) by adding just enough death metal to the overall proceedings that the disc also becomes a lesson in brutality. The ultra precision with which the band operate adds an air of professionalism to everything they do, like they’re old hats at this game and they’re showing other people just how this is done.

The fury that this disc contains is so hot it could ignite nebulas and form stars, a massive explosion that just rips through the air and bowls everything out of its way. Exhale make long songs seem insanely short, even in the case of the crawler of “Left Inside”. I’ve only ever noticed when that song starts, and by the time I realize it has ended, I’ll be halfway through “Machinery” again.

Exhale have one hell of a weapon in When Worlds Collide and it really deserves the attention, even though it’s being released in the back half of the year around the time most places will try to start locking down their lists of top albums. It has that intense anger for which people come to this genre, and it has it in spades. It’s another great release which reminds us that even though we have a little over a month left in the year, albums can still come out of nowhere that will seriously fuck whatever year-end list you had going right the hell up.

When World Collide was released earlier this month by Pulverised Records and can be ordered here.

3 Responses to “EXHALE: “WHEN WORLDS COLLIDE””