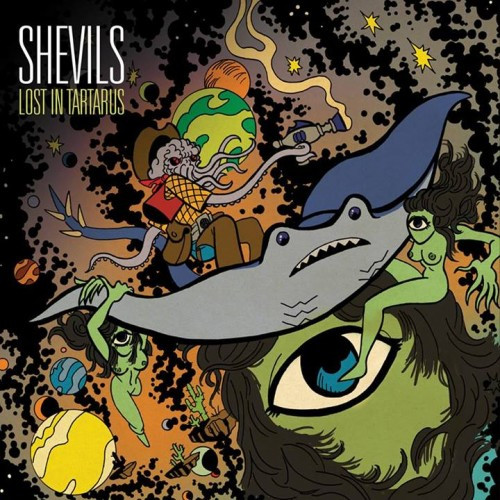 Shevils‘ latest album Lost In Tartarus deftly straddles the line between hardcore abrasiveness and pop-punk hookiness. It delivers 10 mostly short songs that are all irresistibly catchy but backed by enough split-lipped, heavy-booted aggression to feed an appetite for destruction.

It’s almost all one high-energy, blood-pumping, head-nodding romp after another. Most of the tracks are built around punchy, start-stop riffs and compulsive rhythms that are driven home by conjoined bass-and-drum beats that will get your head bobbing. Some (like “Black Eyes” made me want to pogo — if I were young enough to do that without spraining an ankle) and others (like “Timelines”) made me want to bust up some furniture.

There’s a dark, menacing air to “These Walls Are Coming Down”. Corrosive and battering, it benefits from magnetic bass guitar work, which really shines throughout the album but plays a near-starring role on this track. “We Walk on Shattered Glass” ingeniously combines a big, strutting, hooky riff with a piercing, almost spacey guitar lead that comes and goes. 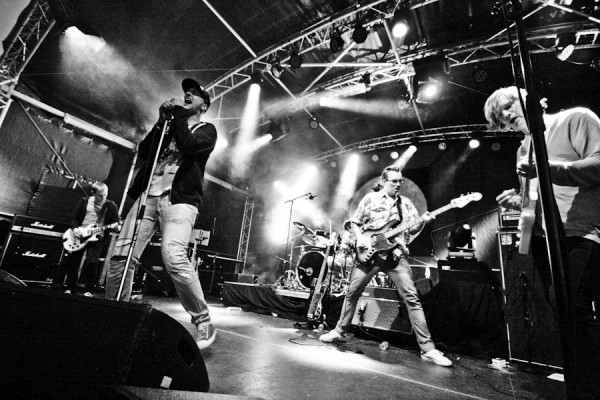 And Shevils injects variety in other ways as well, such as the blizzard of rapid riffing in “Blizzard Beach”, the ominous writhing melody that contrasts with the beefy hardcore stomping in “Destroy All Villains”, and the slow, sludgy lurch that ends “State of Regret” (the only place in the album where the music throttles back into a low, slow gear). Perhaps the biggest change comes in the closer, “Young and Restless”, with the album ending in an extended repetition of shimmering chords over a jack-hammering rhythm. The first time I heard it, my next move was to play it again, and again.

Listeners beyond a certain age will often be reminded of Helmet in their hey-day, but vocalist Anders Voldrønning adds a dose of poison to that style of hardcore hookiness that should appeal to fans of more extreme music (you may be reminded at times of Kvelertak, too). His vein-bursting shrieks and screams sound like there’s enough alcohol in the bloodstream to do some damage he might regret the next day. But he’s also capable of soaring, with a melodic wail (as in the closing track) that suggests there’s some soul behind all the venom.

Dark enough to be dangerous, and with a clear knack for writing punchy, infectious songs, Shevils have turned in a worthy addition to the list of 2013’s standout releases. It’s more than a bit outside the usual NCS trajectories, but I’ve really been enjoying it and hope you will, too.

Lost In Tartarus is out now and available on iTunes, Amazon mp3, and other digital platforms. Stream it in full below.

One Response to “SHEVILS: “LOST IN TARTARUS””