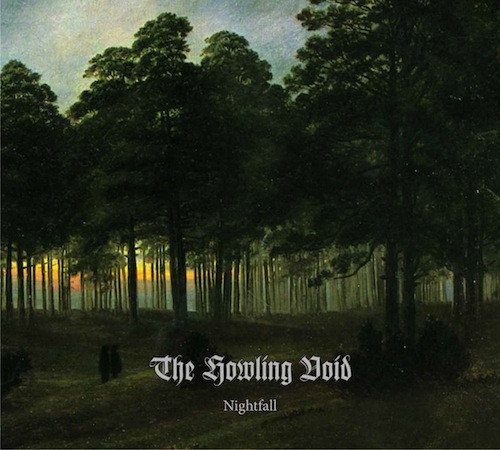 (In this post DGR reviews the new fourth album, now available on Bandcamp, by the one-man entity known as The Howling Void.)

Winter has descended upon Northern California, leaving us all frozen in ice cubes every morning at the shock of sub-thirty-degree weather. As usual, the melancholy mood that strikes around this time of year has found us once again, and so we shift in terms of music from the speed, tech-death, thrash, melo-death, and grind upon which most of this year’s listening has been spent and crawl into to the familiar comforts of the slow, depressing depths of the metal subgenre known as doom — specifically, the type that is remarkably European, laden with keyboards, and created to make the listener envision vast, open fields covered in snow or cities long destroyed, slowly being overtaken by ice. Ethereal almost, if the word strikes you.

When Nightfall by The Howling Void came across the metaphorical desk of yours truly it peaked my interest, in part by defining itself as glacially slow doom and in part because it came from Texas. Not to generalize North America in any sense, especially considering the humongous variety of metal that we have put out and adapted to our own sensibilities over time, but much of the doom that seems to come out of this continent is of the low-fi, fuzzed out, stoner doom sect, rarely using the term “glacial”.

“Glacial” brought up images of slow-moving ice and thus immediately connected to the idea of the more ethereal brand of doom that seems to be a mainstay in Europe, especially when combined with this album’s forest-themed artwork and the band’s logo. From the very start, these signposts made it pretty clear what The Howling Void aimed to achieve on Nightfall, and the album succeeds, coming out of nowhere with a pleasant surprise of that slow, depressing movement for which we come to this genre.

The music on Nightfall is funeral doom with a sense of the epic and grandiose, and it moves as one would expect it to. The music is indeed glacially slow, striding the musical landscape like a stone behemoth freshly awakened, still groggy from a thousand-year rest. Half of the songs surpass the twelve-minute mark easily, and the one shock that comes right in the middle at three minutes blends right in with the song after it. The Howling Void could easily traverse into drone territory if it weren’t for the constant, oppressive layers of keyboard and synthesized orchestration behind the music.

Every song on Nightfall actually has lyrics, usually consisting of about three stanzas of words, yet they are chanted and blended into the music, and thus it becomes hard to notice that they are even there – existing instead as another bed of instruments upon which to lay music for which “crawling” seems too fast a description. Seriously, the first time the vocals really shined through and were distinct was at about minute seven of “In Subterranean Temples”, which is track two…almost nineteen minutes into the album as a whole. They fit in well on top of the song, given their obvious purpose of being more for mood than making any sort of grand statement. 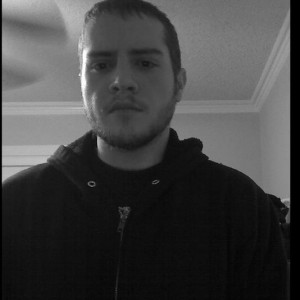 Nightfall isn’t fuzzed-out and stacked to the brim with reverb and other methods of production that would have given it a lo-fi sensibility; it’s not like the music of the stoned-out, more earthen and post- bands who move pretty quick in comparison to the dirge-like pace at which The Howling Void proceeds. With the exception of the vocals, everything comes through on this album relatively clearly, be it piano, guitar, or drums. The music is all the more impressive considering it’s the work of one artist who is the musician on all instruments and the vocalist. From San Antonio, Texas, he identifies himself only as Ryan through the multiple bands of which he is part, and in this case just listing himself as R.

Where Nightfall is at its best is as one long, drawn-out track, with each song functioning as a movement rather than any of them being super-distinct. This is a full-album-run sort of disc, for sure, not meant as a source of the occasional single to be listened to every once in a while. While you could do that, the pace at which Nightfall moves doesn’t quite lend itself to selective listening; instead, it tries to lull its listeners into the hypnotized, dreamlike state in which the music envelops them, like being lost inside a whiteout blizzard. The drumming, in particular, is labored and trudging, making every hit feel like it took the last ounce of strength in order to bring on the next crash of guitars and keys.

There are always hidden melodies in each song so as to keep things interesting, but they are fleeting, instead feeling like an oasis amidst the suffocating mood that Nightfall builds up. Especially on “Mists and Moonlight”, with its constant ringing of a church bell in the background, there is a really good keyboard melody, but one used in such a way that it feels like that part in particular is actually suffocated out of the song – acting as an analogue for the listener. It becomes co-opted to what the guitar is doing, changing notes maybe once every couple of measures alongside the next big cymbal and guitar chord crash. The break in the song around the seven-minute mark where everything fades out except for the keys is particularly striking, because it serves as a clear demonstration of the beauty that this brand of doom can contain. These parts are the ones that listeners are meant to drift along to with their eyes closed, traveling wherever their minds take them, with Nightfall serving as accompaniment.

Nightfall is The Howling Void’s fourth full-length release and it is an impressive work. As the album draws to a close with the relatively calm “Voidward” (which is a truly beautiful instrumental song), even the light folk elements interspersed throughout the disc don’t do much to raise a gloomy mood afterward. Nightfall is the kind of disc that will leave you cold, not because you didn’t enjoy it, but just because of the huge, empty vastness through which the album has taken you. Through music alone, it makes you feel like you’re trapped in the aftermath of a snowstorm, a feat not many groups are able to accomplish.

As my first exposure to the band, Nightfall is extremely haunting, and that’s one of the reasons that I love this genre of music. The slow, depressing pace fits perfectly around this time of year, and it is easy to find solace in it. It allows the mind to wander, drift, and imagine the sorts of places for which the music would be the soundtrack, capturing the beauty of a desolation that is so hard to describe. It achieves its mood and aim with relative ease, showing that R. has a very strong sense of exactly what this style of music is for, and a love of it that truly allows him to know its inner workings.

Nightfall came out on December 2 of this year via the Russian doom label Solitude Productions and it’s an easy recommendation for folks looking for that first, great hit of funeral doom isolation for the cold part of the year.

3 Responses to “THE HOWLING VOID: “NIGHTFALL””