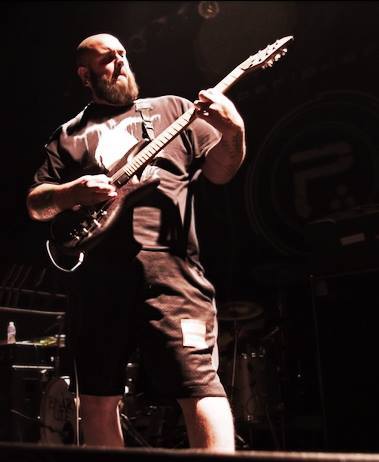 (We asked guitarist and songwriter Jesse Zuretti of The Binary Code for thoughts about his favorite albums of the year, and he did us one better — providing not only two lists but also a streaming playlist of recommended songs from almost every album. The entire playlist can be found here. The recommended songs are identified in parentheses next to the album titles below, and we’ve included some of the streams and videos in the post as well.)

I decided that I’d do two separate lists: one metal, and one non-metal. I did this because I’ve read so many top 10’s this year on metal websites, and saw only a few folks step outside of the box. For me, these lists aren’t votes, they’re ways of recommending material to people. I want metal people to find something new from the metal list, and maybe even find something outside of that realm in my non-metal list. I feel viewers of No Clean Singing in particular are extremely diverse listeners, and deserve more than a list of albums relevant to the genre in which I spend time dabbling. That being said, if you’ve read anything from me before, know you’re in for some brief (LOL) reading! Hope you enjoy these albums, too!

SONG OF THE YEAR: Steven Wilson – “The Raven That Refused to Sing”

The album as a whole didn’t really captive me enough to make it the #1 spot. However, if a single song can represent a year’s worth of amazing music, I fully stand behind the title track, “The Raven That Refused to Sing”. The music video dictated so many emotions through the form of animated story that I CRIED. I’m a grizzly bear of a man on the outside, but I’m a human bag full of emotions on the inside. This song just ripped right through me. It’s absolutely beautiful in every way. The video not only does the song perfect justice, but in a day of contrived music videos, the video actually elevated the power and significance of the song. I truly hope I’m not alone in feeling so emotional when I saw the video, just so I can avoid being made fun of by my steel-hearted metal peers!

I haven’t been so inspired by musicianship-heavy music in quite a while. The song-writing, the passages, the vibes, the technique, the choice of notes, progressions, it’s all there for me. This album was all of my favorite parts of Textures, Cynic, and fusion music like Allan Holdsworth, and Planet X, mixed into one, with a dash of proggy ambience. Being inspired holds just as much value to me as does reaching into emotions and originality. This album somehow does all of that, without vocals, nonetheless!

Another musicianship-heavy album that just hits all of the sweet spots of my musical heart strings. The grooves, the textures, the emotions, it’s all so familiar to me. I think my favorite thing about this album is how unbelievably talented the guitarist is. If this dude doesn’t start making a bigger name for himself, I will lose faith in humanity more than ever before!

Extol is my Metallica, so to speak. This release came out of the blue for me, because after so many years of hoping for new material, it finally happened when I gave up all hope. This album has my favorite moments of older Extol, namely the Synergy and Undeceived albums. I like anything these guys do, but this newer album was a ray of hope for me that Extol is back and not going anywhere!

Jolly was pointed out to me by a good friend of mine recently, and boy am I glad he did! Jolly takes pretty much everything I love about the 90’s alt rock scene and adds this super proggy (yet reserved, and mature) element to the fold. There’s something David Bowie/STP-esque about the singer/guitar playing. I’m just blown away by this album, and I hope it picks up steam with the prog world, which it seems to be doing!

5. One Hundred Thousand – A World Divided (Far From Dead)

Okay, I’m going to admit something: I’m biased here a little bit. Okay, a lot. This year, I decided to join One Hundred Thousand as a live guitarist, and worked with the band, and even played a show. But, alas, I have too much going on in life to hold back a band with so much potential, and had to take a step back and let the band get a guy in who would really focus on them. So I developed an exorbitantly intimate relationship with the music, since I had the songs on repeat and had to learn them. However, I was a fan before I started jamming with the dudes.I’m going to leave it at this: if these dudes aren’t signed within a year’s time, I’m going to question whether or not this is reality, or if this is a nightmare.

6. Hacride – Back to Where You’ve Never Been (Edification of the Fall)

All I can say is: BUMMER! Why? I wish I heard this album sooner. This album — had I listened to it 10 more times before I made this list — may very well have been my #1 album of the year. This album is RIDICULOUS!!! If you like Gojira, Textures, Meshuggah, Devin Townsend, or some of the more unknown hybrid bands like Trepallium, Outcast, or Scarve, you will LOVE this album. I’m going to make my #6 choice my honorary #1 just because this album will soon become a classic for me, and I know it.

This song in particular, “27 Club”, is proof that Michael Jackson lives on in spirit! What an amazing singer this guy is. This album is packed full of heat, and I love every minute of it.

Honestly, this album as a whole isn’t really what did it for me, to get them on the list. It’s this one particular song, at one particular moment, where I was just blown away. And sometimes, all it takes is one song to transform your opinion about something. “Eventual” starting at 3:11 absolutely captivated me. When a song reaches into your musical soul, you can’t ignore it. Hence, it’s on my list!

I almost like the live versions of these songs better than the original studio albums. ALMOST. But I’ll be forward: hearing “Judith” live on recording gave me GOOSEBUMPS. Get into this if you are an APC fan!

Saw NIN live recently out of left field with my buddy, and man… my views on NIN and their music changed DRASTICALLY. I left blown away. This band truly encapsulates what it means to be a live performance artist. All of the songs they played live from Hesitation Marks were amazing. I can be taken back in time at any moment listening to this album.

3. Washed Out – Paracosm (it feels alright)

Recommended remedy if you: need to calm the fuck down. First got into Washed Out because the theme song to Portlandia made me feel like I was underwater swimming with mermaids. Found out who did the song, and have been hooked every since!

Okay, not only is this album significant and should be required listening for all musicians, but the documentary the precedes it is also just as important, if not more. Dave Grohl will learn the shit out of you with the Sound City documentary, and then he’ll take you into his studio and have all of these amazing musicians come in and jam out songs JUST FOR THE DOCUMENTARY that crush most well-thought-out albums flooding the rock sections at your local record shops. Watch the documentary, listen to the album, feel history.

I used to have a crush on Mazzy Star as a young kid based on her voice alone. “Fade Into You” to this day takes me right back in time to being 10 years old in my dad’s car in New Jersey on the way to the airport to fly home to my mom back in New Mexico. My dad has turned me onto so many amazing bands and musicians, but Mazzy Star stands out to this day. This album is nostalgia central.

13. Steven Wilson – The Raven That Refused to Sing (song)

This made my song of the year! Read above!

15. David Bowie – The Next Day (The Stars Are Out Tonight)