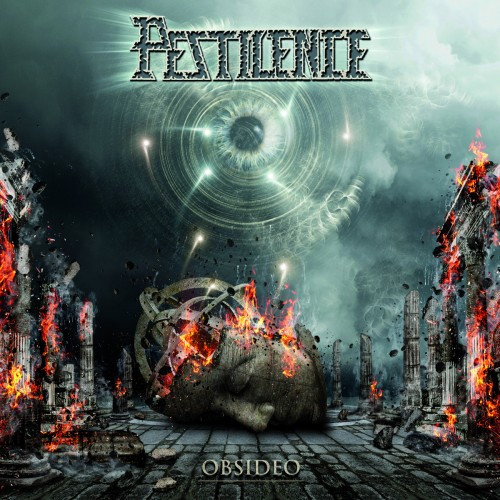 (Earlier this month TheMadIsraeli finished a review of the entire discography of seminal Dutch death metal band Pestilence prior to their newest work. And now he fills that gap as well.)

“Grotesque” is the word when describing Obsideo.  Its bloody, puss-dripping, rotted-flesh, hulking frame can be seen coming from miles away with the last gasps of a human life that open the record.  Pestilence have been vicious, feral, filthy even, but never have they sounded more obsessed, fetishized, and depraved than on this record.  When it’s done turning your body into a sandbag of shattered bone fragments, it drowns you in its putrid excrement afterward without mercy.

This is the kind of shit Pestilence have always done well, and this particular turn of sound has produced the band’s heaviest record since Consuming Impulse.  The thing that really makes this record is just how fucking carnivorous its assault is.  Everything sounds eager for blood, eager to destroy, eager to desecrate.  I don’t know whether it’s the dank tone of the eight-string guitars this time around, the deeper, more feral nature of Mameli’s vocals, David Haley’s tribal blunt-force drum performance, which sounds like a cacophonous death rattle, or what, but this record has me frothing at the mouth for carnage.  In a sense, Obsideo is the record that most fits the Pestilence name.  It’s corrosive, pernicious, destructive, and polluting in all possible ways. 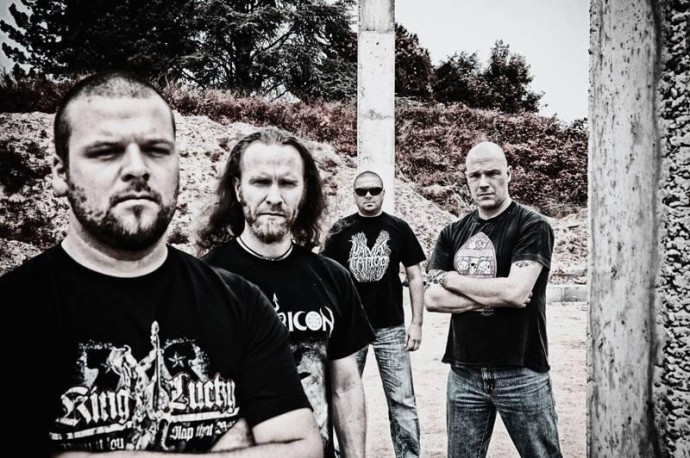 At its very core, this is a roundabout revisit of the sound on Doctrine.  The eight strings make their return; the riffs are very low-end focused and rely on much of the same dissonance.  The groove factors have been notched back quite a bit in favor of speed (which works for me, as Doctrine was at its best when it was in full-throttle deathrash mode), and the technicality of the riffs has been ratcheted up.  The Spheres-esque dissonance has also been made a prominent factor.  The bass playing of new blood George Maier interestingly takes a step back from Thesseling’s antics on Doctrine. It ends up providing a more metallic quality to the dissonance this time around as it’s far more guitar driven, making the attack more pointed.

I mean, this album really makes its presence known within its first two songs, “Obsideo” and “Soulrot”, colossal flesh-flayers covered in snake venom that trash and snarl at light speed, delivering cataclysmic gravity-amplifying crushing grooves of little respite.  The songs also demonstrate the more sophisticated direction of the solo work, which has taken a significantly jazzier and alien turn.  The first solo in “Soulrot” seriously sounds like an out-of-body experience filled with horror and awe.  At other times, they coil themselves around you with serpentine crawlers like “Transition” and “Laniatus” that flow like rivers of poisonous bile.

The groove aspects, when they rear their heads, take a significant step up from “Doctrine”.  They have weight to them, and a spine-chilling filth that feels otherworldly.  “Otherworldly” is definitely the other word I’d use to describe this album.  Some of these riffs and solos are downright incomprehensible with the sense of dissonance they accomplish.  I thought older Gojira accomplished some shit in that department until this record.

I love this album.  It’s so dedicated to reveling in its own rot and disgust it’s hard not to be completely absorbed by it and give yourself whiplash.  I’d also call this an air-guitar-worthy album.  The riffs are especially wicked, and feel like some of the best guitar work the band have done in awhile.  It holds true to the Pestilence name of course, so really, if you like Pestilence and everything they’ve done up to this point, chances are you’ll love this as much as I do.  It’s so fucking nasty, so brutal, and so ruthless.

Not many bands make a record that could be the soundtrack to the spread of plague, famine, or disease like Obsideo.  Pestilence have accomplished the sonic ethos of that imagery.