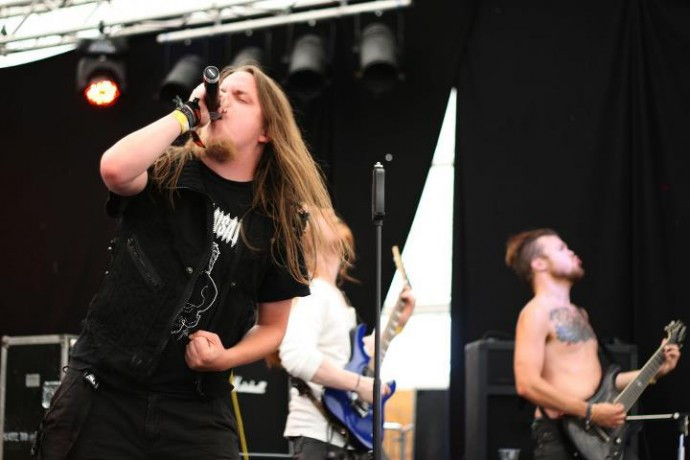 (As we have in the past, we asked our friend Fredrik Huldtgren, vocalist for both Sweden’s Canopy and Germany’s Kaos Vortex and the man behind the exciting Elemental Nightmares vinyl project, to share with us his favorite albums of 2013, and here’s his list.)

I always have trouble coming up with these lists, mainly because I can never remember what was released when, and usually once I find something I truly enjoy, I tend to get stuck on it and miss out on a lot of the other albums that came out. So, after going through what I had bought this year, here is a list of the 10 albums I enjoyed the most.

10. The Ruins of Beverast – Blood Vaults – The Blazing Gospel of Heinrich Kramer

To follow up an album such as Foulest Semen of a Sheltered Elite is no easy task, and while Blood Vaults … does not quite live up to its predecessor, it is one hell of an album. Brooding, dark, and filled with some great riffs.

9. October Falls – The Plague Of A Coming Age

An album I had almost forgotten about, as it came out quite early in 2013. M. Lehto is back with another excellent atmospheric black metal album. This one contains 9 tracks, mostly clocking in around 4-5 minutes, quite different from the previous album,  which let the songs flow out a lot longer. The result is an album that for me doesn’t feel quite as much a whole, compared to the previous ones, and there are some ups and downs on this one. Having said that, it is still a solid album and one that I thoroughly enjoyed.

I have enjoyed Amorphis through many of their albums, regardless of style, but I must say that during the last few albums (Silent Waters and onward) I have come to appreciate them more and more. Circle is for me the natural continuation from Beginning of Times, and having less and less death metal vocals was hardly a surprise. Tomi’s clean vocals are excellent, and while I would wish for them to incorporate a bit more death metal into their sound, I still love the album.

An album that people seem to either love or hate. Same as it was when Projector came out. And the similarities with Projector of course abound. As I happen to fall into the camp of people who find Projector the best DT album, I of course truly enjoyed Construct. This album requires you to have some patience and truly listen, but once you do, you will start to hear what makes it so good.

I was introduced to Deafheaven back when I was visiting Seattle. Islander himself brought me to one of their shows and I was blown away by their intensity. It was an experience to remember, and I immediately picked up Roads to Judah. Sunbather probably has the best drumming of any 2013 album, together with some rather out of place ‘happy’ riffs. It makes for a very interesting listen, and I can see why it has been placed so high on so many lists.

True To His Own Spirit is very Rotting Christ in all ways. Bombastic, repetitive, marching, and something you just cannot stop banging your head listening to. Rotting Christ have always been a band that you need to see live to truly appreciate, and it was after having seen them perform these songs live that it truly clicked for me. Χ ξ ς’ !

Ashencult’s Black Flame Gnosis was an album I truly enjoyed in 2012, and when I saw that they had teamed up with the Swedish occult black metal band Mephorash I was very intrigued. The resulting split is for me a brilliant piece of black metal. Great melodies, excellent vocals, and great drum work. I for one can’t wait to hear what comes out from these two bands next year.

Another split here on my list. Having enjoyed Oak Pantheon’s From a Whisper a lot, I was curious what would come next. Once I had heard of the split I decided to check out Amiensus, and I think that Restoration is probably the album I listened to the most this year. (It was released on the 31st of December 2012; had it been one day later, it would have been my top pick this year). The split itself is a great meld of two great bands. The songs flow into each other and complement each other perfectly. If you enjoy melodic/folky black metal, then this is a release you can not miss!

I have to admit that I am a rather huge Finntroll fan. Nothing gets my mood up like they do, nothing makes me want to just drink beer and enjoy like they do. This album starts where the great Nifelvind left off and then just goes completely insane. Kazoo’s, an insane horns section, and some great humppa-like sing-a-longs. What more can you ask for?

My favorite wierdo black metal band are back, and with Valonielu they went on another psychedelic trip, perhaps not all the way into space as on Kosmonument but this album has some of the best riffs I have heard this year. They let things go on just long enough, before they pull you under with something new. Do yourself a favor, and listen to this. Press play, close your eyes and just let it flow over you. You will thank me.

A Skálmöld live DVD with a full orchestra and choirs? Holy shit! The word epic gets thrown around a bit too easily nowadays, but I have a hard time finding a more suitable description of this.