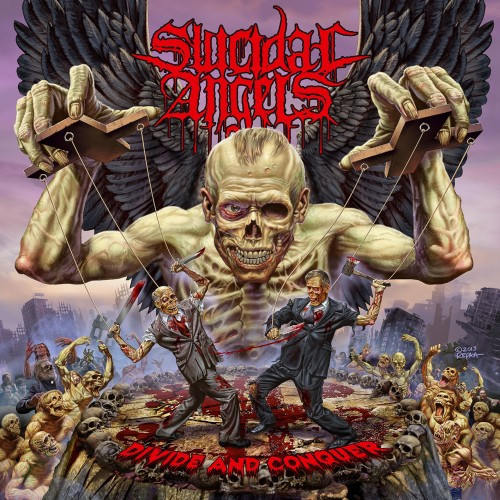 (TheMadIsraeli wrote this enthusiastic review of the latest album from Suicidal Angels, released earlier this month by NoiseArt Records.)

Much like I have viewed Evile, I’ve viewed Greek death thrashers Suicidal Angels as a reliable source of pure adrenaline-pumping high-quality technical thrash metal.  I’ll admit that while I enjoyed 2012’s Bloodbath it lacked.  It lacked a lot.  So much so that I wondered if the band had run out of steam.  Then the video for Divide and Conquer‘s lead single “Into the Grave” came out and I was proven way fucking wrong.

Suicidal Angels decided to rejuvenate their sound.  How?  By removing the death metal and diving purely into their thrash roots. Divide and Conquer is bathed in the technical violence of Dark Angel, Slayer, Sepultura, and Artillery so much it’s like being served all-you-can-eat rare ribeye steaks.  This shit is so whiplash-inducing and air-guitar-compulsion-facilitating that it’s unbelievable. 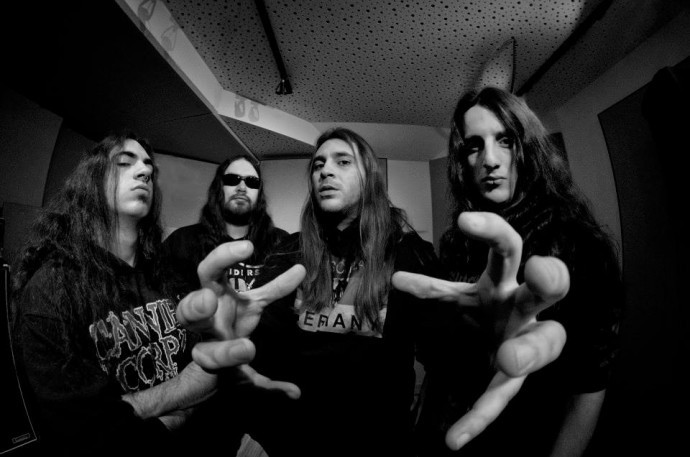 Divide and Conquer rips, that’s for sure.  The opening riff of “Marching Over Blood” signals that shit is about to be fucked up proper.  The music as a whole feels slightly sped up on and the songwriting has improved.  The lead single “Into the Grave” is proof of that, with a stomping mid-paced haymaker pace that soon explodes into a feral pack of hyena’s ripping you into pieces on massive amounts of cocaine.  It’s the kind of songwriting trick Sepultura used that hit the sweet spot for that sweet release of undiluted savagery.

This may be Suicidal Angel’s best record yet, as they delve even into epic territory and branch out a bit, as in the drawn-out acoustic and string intro to “Control The Twisted Mind” and then clocking in past the intro at a Dark Angel-ic time of two seconds short of seven minutes of unrelenting speed.  Other songs are just pure piston-strength turbo-driven concussion inducers.  This is mosh thrash for sure.

An excellent album from an excellent band, and maybe my favorite by them.  Definitely worth looking into if you crave that hyper-aggressive technical thrash that’s about non-stop speed and attitude.