(Here we have TheMadIsraeli’s review of the new album by Sweden’s Soreption, which will be released on February 18 by Unique Leader.)

I first heard about Swedish tech-death Cthulhu Soreption when Vildhjarta mastermind Daniel Bergstrom told me to check them out, hailing them as the new flagship name of technical death metal. I listened to their 2010 debut Deterioration of Minds and was blown away by their brand of mechanical madness. Not only were these guys tighter than advanced machinery, they knew how to write technical death metal that was engrossing on a musicianship level, yet still concise and to the point. That’s a pretty hard thing to do in this style, considering that the vast majority of kindred albums mainly suffer from the writing of songs that just meander through riff sprees and never stick out.

Soreption definitely nailed it with their debut, and now with the band’s sophomore effort Engineering the Void they have created the sonic equivalent of a planet destroyer. Seriously, the record is what I imagine the Earth getting crushed by a giant machine built for grinding planets into dust would sound like. It’s so cold, so devoid of mercy, that this would put anyone not up to the listen into a corner in the fetal position. It’s an autonomous meat grinder, a fucking genocide mechanism, this is tech death at its most pristine and most carnivorous. 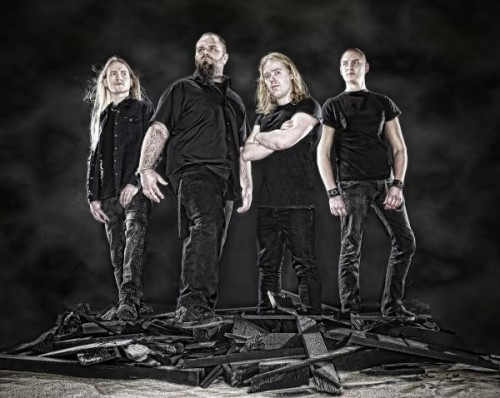 Engineering The Void IS Deterioration of Minds 2.0, but that’s no small thing to say. Everything about the established Soreption sound is here, just better and more brutal, with a more mature ethos about it.

The album is an example of tech-death guitar work at its finest. Anton Svedin’s riffs sound more like an alien space-wasp attack than anything. Soreption are definitely identifiable in part by the riffs and the solos; the frenzy of technical proficiency that just feels like a buzz-saw tearing through the fabric of souls is what drives the sound.

Of course, this music wouldn’t work without the rest of the band, and they are masters at what they do, too. Bassist Rickard Persson is absolutely inhuman, slithering and dancing around the fretboard along with the riffs with ease. The fact that his bass is quite present on this record adds to the album immensely. Soreption’s riffs are very much in the noodily and ever-moving school, and his ability to write bass lines that lock in tandem with the guitar give them much needed-meat that they otherwise wouldn’t have.

The drums and vocals of Tony Westermark and Fredrik Soderberg are also on point. Westermark’s drumming is excessive, decadent even, and filled with all sorts of flourishes, while Soderberg’s vocals are putrid and disgusting, yet handled with masterful precision.

This is a pretty big monster of an album with which tech death begins 2014, and anyone who releases a record this year in Soreption’s field is going to have to be really fucking badass and exceptional if they hope to keep pace. Definitely worth the wait, and a must-have album.

EDITOR’S NOTE: Engineering the Void is due for release on February 18, 2014, can be pre-ordered here. To hear the title track, which features guest vocals by Trevor Strnad of The Black Dahlia Murder, go here. A previously released song and an album teaser can be heard below.

14 Responses to “SOREPTION: “ENGINEERING THE VOID””