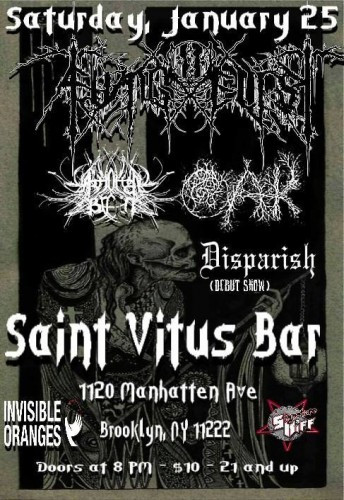 How nice that the Ævangelist video filmed at St. Vitus by Frank Huang was the performance of “Abysscape”. And how nice that the alien nature of the song was matched by an otherworldly performance, beginning with the band’s live bassist — ][ — shrieking his lungs out for minutes on end before the song kicks into gear and lead vocalist Ascaris starts discharging his horrific, abyssal roars. Performing against a red backdrop but nearly immersed in shadow, both ][ and the band’s musical mastermind Matron Thorn are covered in strange sigils, and the top of Ascaris’ face is concealed by a creepy mask. Visually, the band is as arresting and unsettling to watch as their music is to hear.

Artificial Brain’s debut album Labyrinth Constellation is set for release on February 18 by Profound Lore. Unless I’ve missed something, two tracks have premiered so far, at Pitchfork (“Worm Harvester”) and Metal Sucks (“Absorbing Black Ignition”). Both songs are really, really good, and I strongly encourage you to check them out if you haven’t already. The music is technically-oriented, multi-faceted death metal that integrates jet-fueled fret- and drum-work, surprising atmospheric interludes, and gut-punching brutality (thanks in no small part to Will Smith’s gruesome gutturals).

It turns out that Artificial Brain can deliver the goods on stage as well as in the studio, as you’ll see from the two songs captured by another of Frank Huang’s videos from St. Vitus. Watch and listen below.

While Ævangelist and Artificial Brain were wrecking heads in Brooklyn, on the same night about 1,100 miles to the south, Obituary were rocking The Haven in Winter Park, Florida. NCS supporter and occasional guest contributor KevinP was at that show and he filmed the band performing three new songs that will appear on their next album. It appears that Kevin only caught the name of one of the songs — “Violence” — but all three are crushers, the kind of death metal that compels a bout of severe headbanging. Check ’em out below.