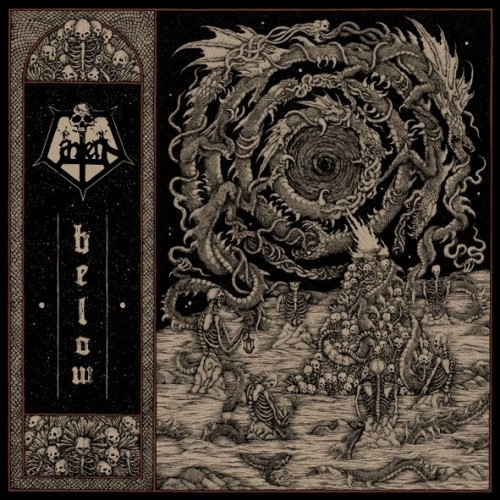 Welcome to Part 15 our list of the year’s most infectious extreme metal songs. For more details about what this list is all about and how it was compiled, read the introductory post via this link. To see the selections that preceded the two I’m announcing today, click here.

This Finnish duo’s 2013 album, Below, was one of the year’s best — and most astonishing — surprises. At one level, it is dank, moldering, primitive, highly destructive death metal with an overhang of catastrophic doom. In fact, when I wrote about the album’s first advance track, it was in a post entitled “Horrific”. And yet there is so much more to it than a recapitulation of old-school crypt-born precedents. The music often evolves in unpredictable ways, with strange guitar interludes and off-balance drum rhythms, and the atmosphere is often completely otherworldly, as if we are being treated to death metal from a parallel dimension different from our own.

The production quality is murky and obscure. The vocals become vehement proclamations of damnation when they’re not howling with ghastly malevolence. As TheMadIsraeli put it in his review, “The music of Lantern is really, at its core, an esoteric roar from a cavernous abyss.” And yet I think many of the songs are also strangely infectious. I wouldn’t go so far as to cay they’re “catchy”, but they exert a strong magnetic attraction that has drawn me back to Below many times since first encountering it.

I think “Entrenching Presences” is probably the album’s best song, and the one that most fully encapsulates the qualities that make the album so striking. And for me, it’s also the one whose magnetic field has been the most irresistible. It belongs on this list.

We published no fewer than six posts about this “super group” dating back to our first discovery of its formation, and yet never managed to turn out a review of their excellent self-titled debut. But take it from me — it really is excellent and really is worth your time if you haven’t yet discovered it. And if you’re unaware of the talents who have banded together under the VHÖL name, allow me to repeat their names: John Cobbett (Hammers of Misfortune, ex-Ludicra, GWAR, and Slough Feg), Aesop Dekker (Agalloch, Worm Oroborus), Sigrid Sheie (Hammers of Misfortune), and Mike Scheidt (YOB).

The first song from the album that I heard turned out to be the one that I’ve gone back to more than any other. “Grace” is a ripping, rocking, moshing, pedal-to-the-metal fusion of rapid-fire guitars, high-octane drum and bass rhythms, scalding black metal vocals and banshee shrieks, a couple of brain-melting guitar solos, and a quick but oh-so-cool bass solo. And did I mention that it’s also highly infectious? It sure as hell is… and it’s the latest addition to this evolving list. Listen below.