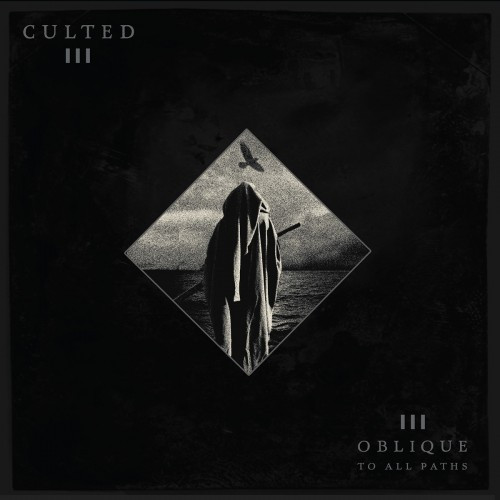 (In this post you’ll find Austin Weber’s review of the new album by Canadian/Swedish band Culted.)

In the heart of winter, doom metal often makes for a great soundtrack to the season, as both the cold and doom have a common nature — they both desire to choke the life out of you. This is where Culted come in. They are a group of talented Canadians with a vocalist based in Sweden who together have utilized the internet to collaborate and give humanity top-notch doom that swells with an intense aura of bleak misanthropic rage.

The artwork certainly draws you in quickly, its imagery of a cloaked figure peering out at decay providing a visual glimpse into the crawling cold punishment explored on Oblique to All Paths. This is unsettling doom, bound in a sense of torment that seeps from every note and scream. Oblique To All Paths is sludgy, sometimes drone-y, and graced with piercing black-metal, reverb-soaked screams. Culted have a tendency to dress up the desolate proceedings in soundscapes that capture a morbid and mellow Swans-esque feel. This being a doom record, there are copious amounts of reverb and feedback swirling around, which only serve to magnify the deliciously suffocating and quite tripping duality conjured on Oblique To All Paths.

The album begins with “Brooding Hex”, a massive, near-20-minute composition. It begins like a dirge but rises in intensity, aided by an encroaching wall of feedback and slinking guitar-work that culminates in an extended period of brilliance starting around the 10:20 mark, when a bouncy, bass-heavy, chill-out moment takes over, spiked with acidic screams. The song then moves straight into an equally brilliant, eerie, reflective pause around the 12-minute mark, which eventually shifts from beautiful to sour-sounding. The song closes with what could be mistaken for a trippy Pink Floyd part if not for the sparse downbeat piano, which takes a moment that would otherwise be pacifying and twists it a few degrees closer to ominous.

While I really enjoy this track I could see how the band’s decision to put the longest song as the opener might put some people off. However, that is no reason to dismiss it, as it’s a dense piece of music marked by multiple movements and a spectrum of different feelings. This is easily the most dynamic song on the album, and the rich variety of textures and the music’s harsh/trippy back-and forth nature make “Brooding Hex” a towering epic entity worthy of opening the album.

What comes next is the track that made me want to review this after I first heard it. “Illumaniti” is certainly ugly yet also very hypnotic. The rising ambience that penetrates the song lends a nail-biting, apocalyptic, sirens-going-off feel that is disturbing, while also sounding like a horror film score.

“Intoxicant Immuration” follows by dropping the listener into an oppressive murk, radiating with filthy riff funerals, paranoia, and a foreboding sense of dread that is genuinely chilling. The song also breaks out into a few, separate light-meets-dark sections, an idea that Culted revisit expertly throughout multiple tracks in haunting fashion. The band’s willingness to experiment with lighter textures amidst the storms they create is a big part of what keeps me coming back.

The album title itself perfectly mirrors what Culted achieve in their music. They are not bound by any one path, but instead excel at combining different elements to create a miasmic terror that knows no bounds. What makes Oblique To All Paths memorable is the complex manner in which Culted infuse their titanic reverberating heaviness with hefty doses of ambient additions, noises, and synths, adding depth and dimension to the music. If you want to hear doom that’s a bit different, Culted should be a worthy fix.

Oblique To All Paths is out now through Relapse Records. Stream it below.

2 Responses to “CULTED: “OBLIQUE TO ALL PATHS””