The band have released a trailer for the album. It’s mainly just a string of clips from previous videos, but I’ll stick it up here anyway: 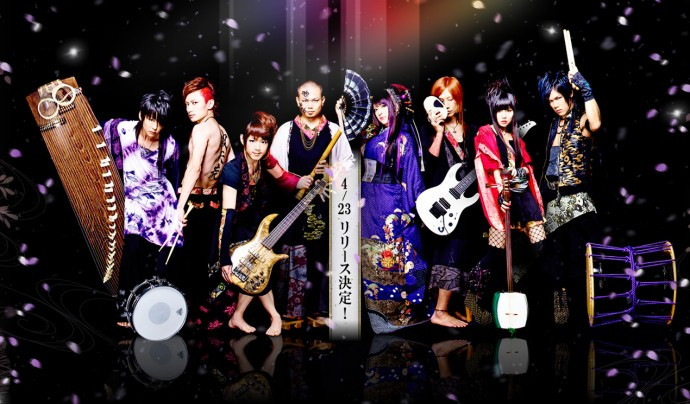 I  found out about The Wagakki Band last October from our Tokyo-based friend Phro and wrote about them here, embedding a number of their videos. In addition to recording covers of vocaloid songs, they also blend traditional Japanese instruments and musical styles with Western hard rock. And so the band’s seven musicians (not counting fan-swinging vocalist Yuko Suzuhana) include not only a drummer, a guitarist, and a bassist but also a tsugaru-jamisen (Japanese lute) player, a koto (Japanese harp) player, a shakuhachi (Japanese flute) player, and a taiko drummer.

On January 31, Phro sent me a link to a new video from the band that had just appeared on YouTube. I’m not sure about the name of the song, because I don’t read Japanese [update: Phro tells me the name is “Senbon Zakura”], but it appears to be from a forthcoming album named Vocaloid Zanmai, which will become available on April 23. Actually, I’m not sure about the name of the album either — the name I used is the one Google Garble gave me when I used it on the Japanese text that accompanies the video.

Anyway, the video is cool. Here it is:

12 Responses to “UPDATES: BABY METAL (A NEW ALBUM) AND THE WAGAKKI BAND (A NEW VIDEO AND A NEW ALBUM)”