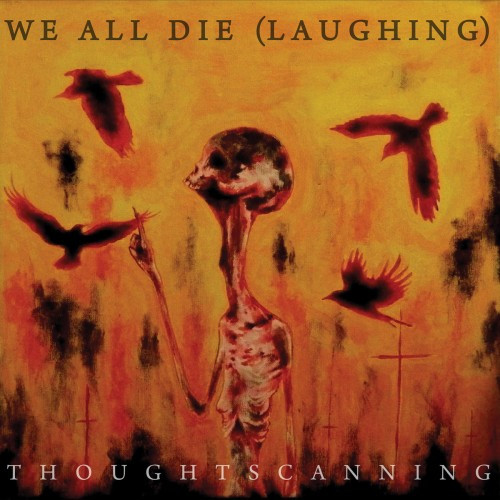 (Leperkahn is back for the second day in a row, this time reviewing the debut album by We All Die (Laughing).)

I meant to review this debut release from Belgium’s We All Die (Laughing) a lot earlier (when it came out back in January, in fact), but the mind is a feeble thing, and only now, with the kind reminder of fellow reader Vonlughlio, do I remember that I meant to delve into this single-song EP (at least that’s how I think it’s being branded). As I’ve said many times in the past, damn me for forgetting to do this earlier, ‘cause I’ll be damned if anything not named The Satanist has this beat so far, and not much has a chance of surmounting it, though we have ten months left in the year.

This release is less of a song and more of a theatric production delivered by electric guitar and vocal menace, a metal opera of sorts. Though it starts with some My Dying Bride-esque doom, it comes to incorporate Machine Head’s more epic moments, Opeth-ian death/doom, a slowed-down taste of Marduk, Behemoth-style majesty, evocative Scott Kelly-sound-a-like vocals, and depressive suicidal black metal shrieks. It  features not only a ridiculous variety of vocal timbres, but also such exotic instruments as a clarinet and a flute (pretty sure that’s the first time I’ve heard a clarinet in metal, other than those tech-death covers that one guy does on YouTube). I almost don’t want to say how it ends; that would feel like giving away the end of a great book, movie, or TV show.

This EP has a cinematic quality that so many other great albums also deliver, and this one does it perhaps better than anyone else in memory. The band make you forget the medium by which they deliver the story, allowing you to fill in the dark narrative the melodies are sketching with whatever details you may want. Unlike most music, this EP invites you to interact with it, to use it as a framework upon which your imagination and creativity may thrive.

The one name that perhaps most comes to mind in listening to this release as a whole is Mike Patton, as it takes quite a lot of guidance from Patton’s body of work, whether it be his time in Mr. Bungle, or his collaborations with John Zorn. The band transition suddenly, yet seamlessly, from melancholic death/doom to majestic blackened death metal, to foreboding ambience, to post-metal catharsis, just as Patton’s bands so skillfully did.

In part, this success has to do with the vocal flexibility of the two members of the band: Arno Strobl and Déhà. Between them they are able to cover soft cleans, DSBM shrieks, bilious black metal rasps, some Patton-esque madman passages, Corey Taylor-like croons, and Robb Flynn-like melodic yells, over the course of this single track. Their vocal abilities are what make the adventurousness, the theatricality, and the diversity of Thoughtscan possible.

One of music’s most outstanding qualities is its ability to take your mind on journeys to places it might otherwise never find, to present stories that words cannot adequately describe. (Often, however, such lofty yet hard-to-attain objectives are left behind in order to make room for a catchy hook, or surprisingly, a lazy breakdown.) Thoughtscanning truly carries you on an emotional voyage for its 33-minute run-time, from the depths of melancholic despair, to the peak of anguish, to the infernal forges of rage, and back to glumness and depression. More than any release I’ve picked up in quite a while, save for perhaps my dearly beloved Pelagial, Thoughtscanning moves you, it compels you with wordless tales through the medium of evocative melody. It very well may end up as the most startlingly mature and confidently explorative debut 2014 will see, and could even stand as its best.

2 Responses to “WE ALL DIE (LAUGHING): “THOUGHTSCANNING””