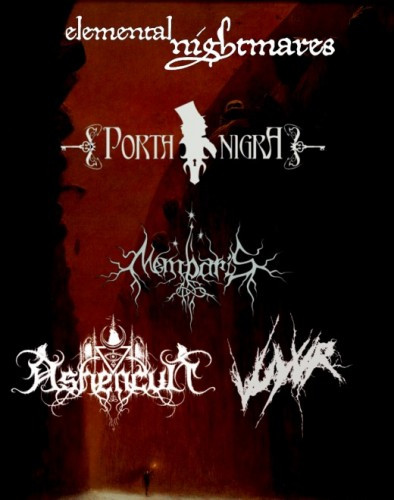 And finally, Friday also brought the premiere (by Invisible Oranges) of four songs that will appear on the fourth installment of the series, and it’s a damned strong way to start off: The bands are Porta Nigra (Germany), Membaris (Germany), Ashencult (Philadelphia), and Vuyvr (Switzerland).

“Devoured” is a good name for Vuyvr’s song, because that’s how you’ll feel after it’s through with you. It begins as a flesh-tearing rampage and then settles in to feed leisurely but no less voraciously. You may think you know where this song is going, but I’m betting you’ll be surprised, and it’s full of small touches and sounds that will keep you on your toes from beginning to end.

Ashencult’s “Metempsychosis:11” takes no prisoners either. It’s a raw, racing onslaught that thrashes, rocks, and exudes both palpable malignancy and the sense that the band is right on the edge of going up in a bonfire of self-immolation. It’s hyper-aggressive but still quite headbang-worthy.

Unlike the first two bands, whose talents I knew about from previous releases, Membaris is a new discovery. Their track “Neon” is just as jet-fueled as the first two songs on the split. It twists and turns with writhing, morbid riffs, agonizing shrieks, and a chorus of clean voices that add a folk vibe to the marauding. The song’s incandescent tremolo lead has a way of getting its hooks into your head, too.

Porta Nigra’s 2012 album Fin de Siècle was damned strong, and so is their contribution to the split: “Haut und Knochen”. At the beginning and at the end there’s a sense of being caught in a battlefield with no place to hide, but while the shrapnel continues to fill the air all the way through, the beat of the song slows and the atmosphere becomes strange and narcotic in the middle. The creative drum performance also comes very close to stealing the whole show.

In a nutshell, this split is like a pack of four black metal wolves running wild, but within each song lurks the glint of red-eyed intelligence. It’s not all gnashing teeth and flowing blood (though you’ll have fun running with them nonetheless).

Since the music streams are not embeddable, you need to go here to listen, and you should. Check out the grouping of bands on all the splits below: