As previously reported: Season of Mist will release the fifth album by Misery Index on May 27 in NorthAm and May 23 elsewhere. The title is The Killing Gods, which in the case of this band is kind of like making it a self-titled release. It was recorded with Scott Hull (Pig Destroyer). As you can see, I found the very cool cover art for the album today, too (conjured by Gary Ronaldson).

Today Lambgoat premiered the first advance track from the album, entitled “Conjuring the Cull”. My initial impressions:  Goddamn, motherfucker, those opening riffs are headbang dynamite! Fuckin’ snare tone! Such a grisly serpentine lead guitar! So infectious! So evil! Such beef! Such slithery soloing! Why are my pants wet?

The song is an exclusive premiere and therefore not embeddable without being devious, so run over to this location and fill your ears. The album can be pre-ordered here from Season of Mist. Here’s what the cover of the gatefold LP looks like: 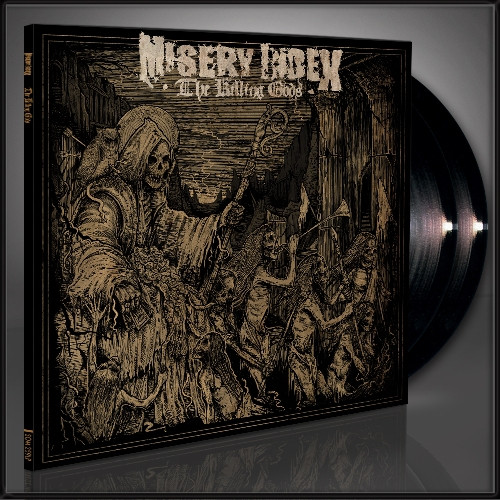 3 Responses to “A NEW MISERY INDEX SONG! “CONJURING THE CULL”!”