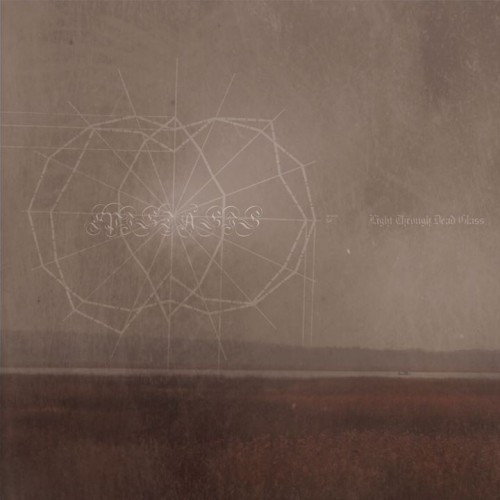 (Austin Weber introduces our premiere of a song from the new EP by NYC’s Epistasis with this review.)

Change and evolution in a musical context is a mighty double-edged sword for artists and fans alike, with fickle listener attitudes and the artists’ desire to keep the fans interested providing both a reason to change and a reason not to change. If we are being honest, evolution is necessary for any artists to feel they are not stagnating, but we as fans often have a hard time accepting this. At this perilous point of intersection is where Looking Through The Dead Glass, the new EP from New York City natives Epistasis comes in.

When I wrote about their 2012 self-titled EP last year at NCS they were a quirky, adventurous group tackling a potent merger of classical influences, metal, and elements of rock to create a dense web of ever-shifting madness. Now they’ve added vocals, and evolved their sound to include a strong black metal undercurrent. Both are bold moves that pay off for Epistasis, allowing them to explore new frontiers musically, while not repeating what they have done before.

While the band take a scathing, blazing approach to portions of the music, their off-kilter experimental side still exists and manifests itself at just the right moments, eloquently breaking up the black metal sensations. This is challenging, unpredictable music that cycles through numerous sonic amalgamations and combinations of black metal, doom, noise rock, and classical music (courtesy of Amy Mills’ mesmerizing trumpet playing). Epistasis do this with class and a skill at scraping together hair-raising sickness, noisey grooves, and mournful beauty, stirring all the ingredients together in a way that will both shatter you and seep into your brain.

Taken as a whole, Light Through Dead Glass is a dizzying, dissonant dream that blooms with cold melodies. The six songs contained within overflow with distinctly different feelings, flavors, and textures that beg to be replayed to better fully experience them.

By shifting their direction after already establishing a unique sound, Epistasis have become purveyors of a highly varied and unpredictable strain of experimental black metal unlike anything I’ve ever heard. If Light Through Dead Glass doesn’t show up on numerous year end lists, I quit.

Now, after telling you why you should check out this EP, here is a song premiere for the track “Witch” to give you another reason to do so. The droning chasm of the first portion of the song will leave you completely unprepared for the split-second shift into a pitch-black feral assault, one that teems with caustic bile-spewing screams, slithering riffs, and destructive drumming.

But since Epistasis are prone to eclectic, swift shifts, that doesn’t last for long. Suddenly the song heads in a different direction, taking the listener closer to a grimy, doomy collapse spiked with harrowing trumpet playing. And then it culminates in a rousing return to the song’s earlier drowning, droning emanations of despair, closing on a note of swelling horror. “Witch” is an unsettling display of vitriol that exudes an atmosphere of dread, both grotesque and arresting.

Light Through Dead Glass, will be released on April 1, 2014, in CD digipak format by Crucial Blast. Epistasis consists of guitarist Kevin Wunderlich, bassist Doug Berns, drummer Alex Cohen (also of Pyrrhon and Malignancy), and Amy Mills on vocals and trumpet (she has also contributed trumpet parts on new albums by Castevet and Psalm Zero).

Here’s the premiere of “Witch”: