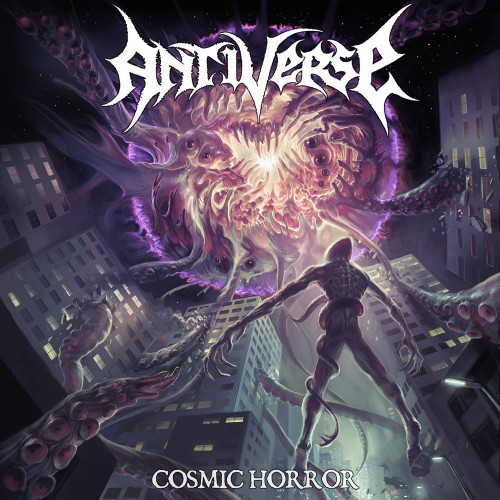 Antiverse is a band of old friends from Minneapolis who have been involved in other musical projects since the 90s but have now united under the Antiverse name to release Cosmic Horror. To be clear, Cosmic Horror is the title of their debut album (due for release on April 8), though it could also appropriately describe the forces summoned by their music. At the end of this post we’ll give you and the rest of the world a first taste of the album as we premiere a song named “Bethlem”.

The band’s guitarist and backing vocalist Carl Skildum described the album’s concept this way: “It reflects our interests in dystopian science fiction and horror, and humanity’s tenuous place in the universe. The name Cosmic Horror obviously is a tip of the hat to Lovecraft although none of the songs specifically address his literary creations, just the general feeling of dread and a sense of being taken unaware by events far beyond our ability to comprehend. It’s a loosely organized grand tour of mayhem, with scientific hubris, North American folklore and cryptids, and otherworldly invaders all taking their turns.” 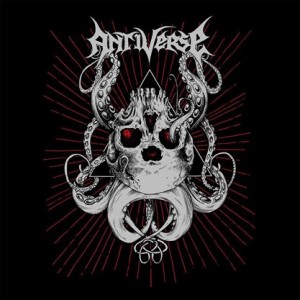 As for “Bethlem”, Carl explains: “The song is named after Europe’s oldest psychiatric hospital, with a long rich history of dubious ‘treatments’ for the mentally ill, including chaining patients up in filthy conditions and ‘cold bathing’, even allowing the public to come in and view the inmates. They’ve since moved and modernized, but they definitely earned the nickname of Bedlam in the 17th and 18th centuries.”

The song successfully captures the psychosis of Bedlam. The bounding, darting riffs have the air of a carnival of the damned, and the full-throated howling vocals and screams leave little doubt that the inmates are in charge of this musical asylum. It’s a high-energy romp, but the song also includes a head-pounding breakdown, some damned infectious grooves, and a guitar solo that’s… demented.

A few more details about Cosmic Horror: The distinctive cover art is by Pär Olofsson, and is based on the album’s closing track “Aurora”, which tells the tale of an alien agent returning home via wormhole after a reconnaissance on Earth. The band’s logo design is by Christophe Szpajdel. The album will be available on April 8 via iTunes, Amazon MP3, and all other major digital retail and streaming services.

Now, check out the premiere of “Bethlem”, and below that you can catch a snippet of another song in a video of the Cosmic Horror recording process.