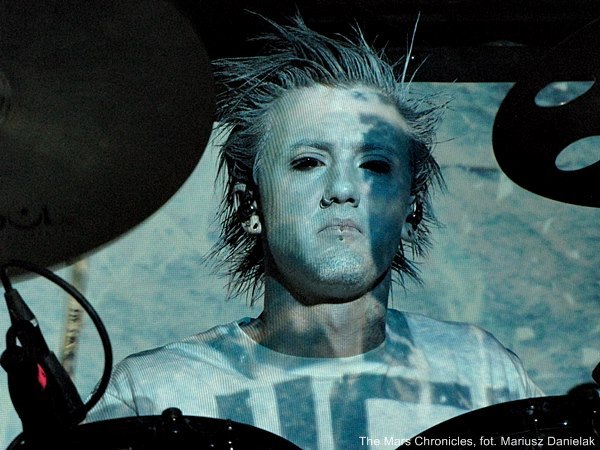 There are times in the play-through when what he’s doing looks simple — and then he’ll twirl a drumstick through his fingers in mid-beat so fast that you wonder if you really saw it. Those drum twirls having nothing to do with the sound on the song, but they’re still really impressive. The actually drumming is impressive, too.

This isn’t the kind of extreme metal drumming that’s got the foot on the gas from start to finish, though when Berthet does explode in brief bursts throughout the song, he’s really fast. And even when he’s not hitting things in a blur of speed, he’s interesting to watch because he’s often running in counterpoint to the rhythms of the riffs. Also, he looks like he was dusted in flour. And his eyes don’t look human.

The song as a whole has grown on me the more I’ve watched the video, even though it’s slightly outside the usual range of my tastes; it is, for example, an exception to our Rule. It reminds me a bit of the Dutch band Textures. “Abyss” comes from The Mars Chronicles’ self-titled debut EP, and I’m including s stream of that below. The video is really well filmed and edited. Hope you enjoy it as much as I have.