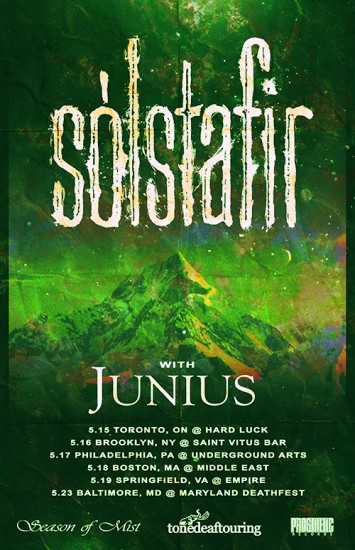 I don’t have the data at my fingertips. It’s possible that we’ve written about some other band more than we’ve written about Iceland’s Sólstafir over the years — but I’d be surprised if that were true. And so it’s a foregone conclusion that I’m posting the following announcement of the band’s first “North American” tour, even though some literary license has been taken with the term “North American”:

Icelandic rock heathens Sólstafir have announced a string of North American tour dates. The band’s first-ever North American trek starts on May 15 in Brooklyn, NY and will continue through the band’s stop at this year’s Maryland Deathfest on May 23. Support on these dates comes from JUNIUS. A full list of confirmed tour dates can be found below.

Normally, upon seeing news that a band I care about is limiting their appearances to portions of the Atlantic coastal states, I would be quietly weeping or unquietly raging. But since I do plan to make it to MDF for the first time this year, I’m doing neither.

Those of you in the vicinity of these select cities, start making your plans. As for you Canadian and US fans to the West and South of this pocket of fortunate locales, just hope that all these shows go so damned well that the band will come back for something more geographically expansive in the near future.