Yesterday Nuclear Blast announced that Sweden’s hugely popular and hugely influential Meshuggah would be returning to North America this summer for a tour celebrating their “25 Years of Musical Deviance”, with support from Between the Buried and Me. As originally announced, the tour consisted of only 12 dates, two of which were festival appearances. But today the band announced a significantly expanded schedule of tour dates, going well beyond the original 12 cities.

Inconsistent explanations have been offered for the change. In today’s official announcement frontman Jens Kidman is quoted as follows:

“This is our 25th anniversary tour of the North American market, which has been an enormous factor in the success of our band — probably the single biggest factor. Of course, we always planned to make this the biggest tour we’ve ever mounted. To do anything else would have been churlish.

“That miserably tiny run of dates our label announced yesterday was supposed to have been an April Fool’s joke, but as we like to say in Umeå, someone at Nuclear Blast “screwed the pooch” by releasing it a day early. We sincerely apologize to our North American fans for the confusion. The expanded schedule we’re rolling out today will make all the butthurt go away like a big tube of Preparation H.”

So, it appears that schedule of just a dozen North American dates — which included such odd choices as Sauget, IL, and Silver Spring, MD, along with many of the usual big cities — was just an April Fool’s joke that was released prematurely. But on the other hand, there’s reason to suspect that this explanation was cooked up as a face-saving PR strategy designed to pacify the throngs of outraged Meshuggah fans who live in the vast wastelands of Canada and the US that were being bypassed in the original schedule.

In an interview published late yesterday in the Umeå Death Metal Observer and Livestock Market Journal, Meshuggah guitarist Fredrik Thordendal gave a different explanation for the slew of new dates:

“Hey, we just fucked up. Touring is something we have to do, but we’re now a bunch of old farts, and the prospect of spending months in our admittedly luxurious tour bus criss-crossing these obscenely large countries was about as appealing as a colonoscopy, especially because there are barely a dozen cities in North America worth visiting in the first place. So we originally decided to limit the tour to 12 dates and figured we could pacify the fans by letting them vote on which songs we would play. We figured most North American fans would be so excited about voting that they’d overlook the fact that they’d never get to hear us play those songs.

“But fuck, we figured wrong. Man, you wouldn’t believe the backlash! The whining on the message boards and Blabbermouth comment sections has reached ear-bleed levels of shrieking bitchiness. There have been reports of suicides, and thousands of djent bands have sworn they’re going to stop copying our riffs and will now try their hand at black metal. The thought of all those pimply faces in corpsepaint is just too grotesque to contemplate.

“So the band convened a crisis management meeting and decided to suck it up and put on a tour that would be worthy of a 25-year anniversary. I’m already getting nauseous thinking about it.”

Thordendal told the interviewer that since the band’s hometown of Umeå itself holds little more than 100,000 people, Meshuggah decided to play every U.S. and Canadian town with a population over 100,000. Because the latest U.S. and Canadian census estimates identify 289 U.S. municipalities and 50 Canadian ones with populations over 100,000, the revised schedule will have Meshuggah on tour in North America from June 6, 2014, through September 2015.

When contacted for comment, Between the Buried and Me offered a succinct statement about the revised plans: “Fuck that shit”. 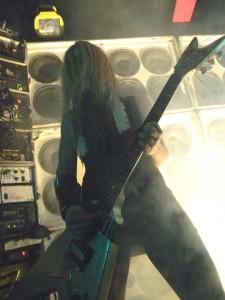 Meshuggah will now be looking for additional support on their multi-year tour. Reportedly, the nomadic Georgia-based husband-and-wife band Jucifer have expressed interest, since they tour 12 months out of every year anyway. According to the band’s frontwoman Gazelle Amber Valentine:

“We’re intimately familiar with all the shitholes on the revised Meshuggah tour schedule. We could offer those Swedes invaluable advice about where to eat to avoid diarrhea and how to find venues with flush toilets. Edgar and I are also thinking it would be a kick to expose all those brain-dead djent fans to Thee White Wall [referring to the massive stacks of amps used in Jucifer’s sludgy live shows].”

Whatever the true explanation for the massive expansion of the Meshuggah anniversary tour, virtually every person alive in the U.S. and Canada will now be within reasonable driving distance of a Meshuggah show at some point over the next year and a half. Anticipating that approximately three-tenths of 1% of the two countries’ combined populations of 349 million will actually pay to see the shows, Meshuggah is now searching for shirt makers capable of printing 1,047,000 tour shirts. If interested, contact Nuclear Blast.