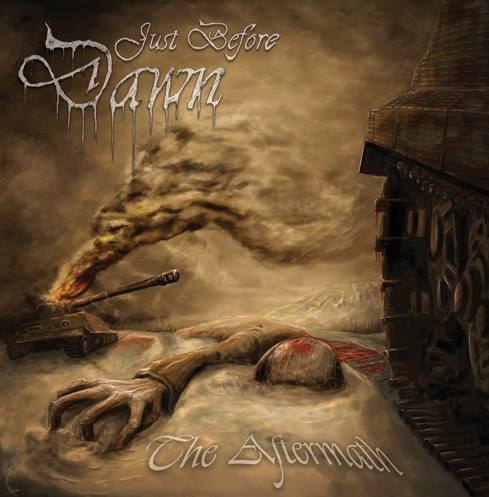 The debut album by Sweden’s Just Before Dawn — Precis innan gryningen – was one of the best old-school, Swedish-style death metal albums I heard last year. I attempted to explain why in this review. In a nutshell, it delivered lethally infectious riffs and grim melodies that gave each song a distinctive and memorable personality; the production made it sound massive; and the top-shelf instrumental chops of mastermind Anders Biazzi (Blood Mortized) were matched by the horrible roars of an impressive line-up of guest vocalists. And today I’m delighted to report news about Just Before Dawn’s next album — The Aftermath — and to give you a taste of the new music.

First, we’re pleased to bring you one of the record’s two album covers, created by Benny Moberg, who also mixed and mastered The Aftermath (the second cover for an edition of the album that includes a different bonus track has yet to be revealed). As in the case of the band’s first release, The Aftermath’s lyrical themes are derived from the history of World War II, and the music is dedicated to the fallen heroes of all wars throughout the ages.

Second, Anders Biazzi has once again lined up a stellar array of vocalists to join their roars to his guitar and bass ferocity, as well as some noteworthy guest guitar soloists. Check out the track list and the vocalists who contributed to each song:

The album also includes guest guitar solos by Gustav Myrin, Jonas Lindblood, Rick Rozz, Thomas Wouters, Ronnie Björnström, and Dennis Blomberg, as well as guest percussionist Mattias Borgh on Track 8. The principal drummer on the album is Brynjar Helgetun. The album will come in two editions, with separate bonus tracks for each one, as noted above.

The Aftermath will be released by Chaos Records later in 2014. Stay tuned for further details.

And now, feast your ears on samples from two of the album tracks — “Death From Above” and “Bastogne”: