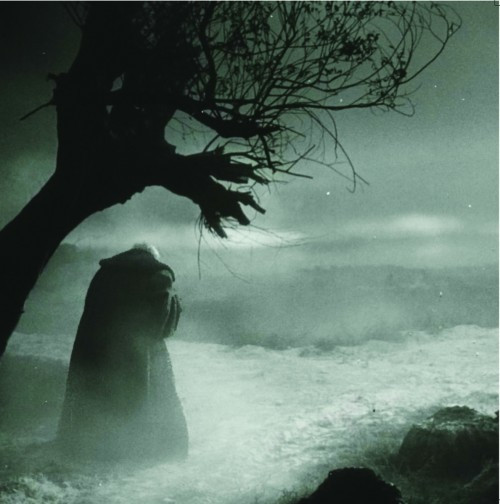 Sadhak is a Norwegian band (from Trondheim) about whom I’ve found very little information. I learned of the band through a message from Shadow Kingdom Records, which released Sadhak’s self-titled demo on cassette tape last month (Sadhak originally released the demo on tape and digitally last fall). According to the message, the band is a side project of Andreas Hagen, who is a member of High Priest of Saturn. I’m not familiar with them, but Shadow Kingdom’s message compared Sadhak to Warning and 40 Watt Sun, and that was enough to lure me in.

The demo consists of two long songs, “On the Arrival of Man” and “The Perfection of Wisdom”, and I found them both immensely appealing. They very effectively draw you away from the world around you and into a place where the light is failing and the void beckons.

In both songs, Sadhak employs slow, distorted guitars, gut-rumbling bass notes, and the powerful whump of drums and vibration of cymbals — everything drenched in reverb. Of the two, “On the Arrival of Man” is the more desolate and fatalistic, though the bleak melody proves to be thoroughly entrancing as it loops through the song. With two minutes left, the otherworldly quality of the music is underscored by a mesmerizing guitar solo — ethereal, psychoactive, and rapidly shimmering — and then leviathan-sized riffs will hammer you back to the edge of oblivion.

“The Perfection of Wisdom” lets a bit of light and life creep in, as intermittent keyboard notes ping like drops of water falling into an astral pool, barely heard against the backdrop of grinding low-end power. But the song is every bit as spell-binding as the preceding track, and only slightly less weighed down by the atmospherics of doom.

This is an exception to our “rule”: Hagen’s vocals are clean — a high, strong wail (thankfully cheese-free) whose almost ghostly quality both contrasts with and complements the low, heavy thrum of the riffs and the staggering weight of the rhythm section.

Fans of doom metal in almost all its manifold dimensions should find a lot to like in this two-song first offering from Sadhak. I sure hope we hear more from Mr. Hagen’s project in the future.

If you’re interested in a cassette tape of the demo, visit Shadow Kingdom’s store at this location. The album is also available digitally from either of the Bandcamp links below.

6 Responses to “SHORT BUT SWEET: “SADHAK””