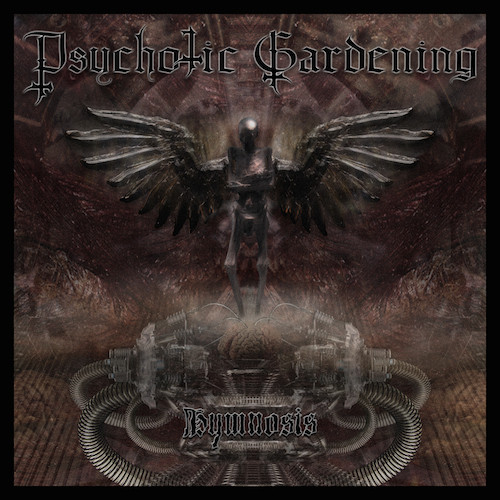 Little more than two weeks ago I discovered the existence of Psychotic Gardening — not the wildly popular pastime in many mental institutions but the band from Winnipeg, Canada. The occasion was the band’s release of a music video for their staggeringly heavy cover of Death’s “Open Casket” from the Leprosy album — and I frothed at the mouth about how good I thought it was.

One thing led to another, and here we are premiering an original Psychotic Gardening song named “Origin of the Infection”. Like the “Open Casket” cover, it will appear on the band’s forthcoming album Hymnosis, which is due for release on May 13.

Based on the interesting spin this band put on “Open Casket”, you could make an educated guess that they would be talented songwriters as well as skilled performers, but “Origin of the Infection” removes the guesswork.

The song alternately lumbers like a behemoth and hammers like a giant sledge on an anvil. A serpentine melody slithers it sway through the midst of all the gargantuan body blows, and the band’s vocal tandem of Gillishammer and Chuck Labossiere unleash a vicious assault. There’s enough groove in the song to split asphalt and enough dank atmosphere to rust iron.

Listen to the song below and watch for the May 13 release on both Bandcamp and iTunes.

9 Responses to “AN NCS PREMIERE: PSYCHOTIC GARDENING — “ORIGIN OF THE INFECTION””