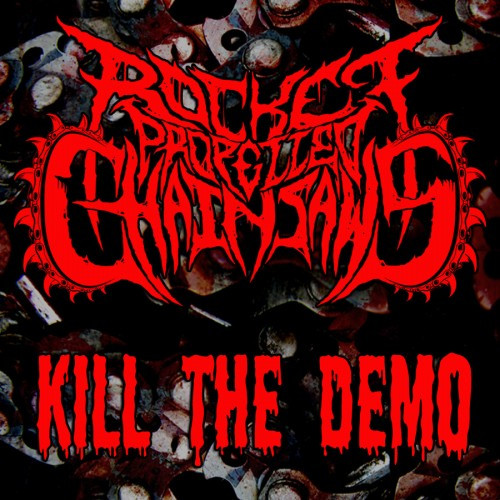 Metal is such a diverse genre of music that you would need an enormous number of axes to diagram the spectra of its manifold characteristics (I’m using “axes” as the plural of “axis”, not that electrified thing you use to shred up a storm of notes or the implements you use to cleave the skulls of your enemies). On one of these axes I imagine two extremes at either end:

At one end there’s deeply somber, glacially paced atmospheric music, with few if any riffs and a pall of gloom and grief hanging heavy like a fog. On the other end — well, that’s where you’ll find Rocket Propelled Chainsaws: the place where you party ’til you vomit and mosh ’til everyone’s on their way to the emergency room with sirens screaming.

I found out about this band because it includes guitarist Sean Corkum, who’s also in a band I’ve written before named Eldritch Flamethrower. Obviously, either Sean hangs out with people who’ve got a gift for coming up with awesome band names or he’s got the gift. Either way, Eldritch Flamethrower and Rocket Propelled Chainsaws are mighty fine names.

The RPCs, who hail from Eugene, Oregon, have recently released a demo named Kill the Demo. It collects three songs that the band released for streaming earlier in their career, but these versions have been remixed and include new bass and guitar tracks.

In a nutshell, the music will thrash your ovaries off (“thrash your balls off” is so cliched). It’s loaded up with flying fretwork, jabbing rhythms, and battering grooves. It blazes, blasts, and gallops. But that’s not all. The band also pick choice moments to ease up on the gas so you can get snake-bit by slowly slithering lead-guitar melodies. And the music is as catchy as chlamydia. And “Run N Gun” gives good cowbell.

One of the many strong points in this demo is the vocal performance of Cordell Cline. He is listed as the only vocalist, and if that’s true, he’s a human chameleon. Because the songs include gravelly death-metal snarls, guttural growls, ear-shattering shrieks, deranged imperialistic proclamations, and abrasive braying that’s about as close to clean singing as he gets (and it’s really not very clean).

But let’s not forget the gang chants, and especially the refrain in “Kill Everything That Moves”. It’s one of many “sing along” moments in the demo, for all those times when you just want to yell at the top of your volume: “KILL!  KILL! KILL!”

Well, I guess you can tell that I think this small offering is a big shitload of vicious fun, a modern blending of thrash and death that may lead you to do things you’ll regret the next morning.

I’m happy to report that the RPCs are also working on new material for another EP or an album, which should see the light of day before the year is out. But in the meantime, Kill the Demo will give you ample cause to throw the devil horns and pump those fists. It’s a “name your price” download at Bandcamp and it’s also available for free on the RPCs’ ReverbNation page. Links are below, along with the song streams. KILL!  KILL! KILL!