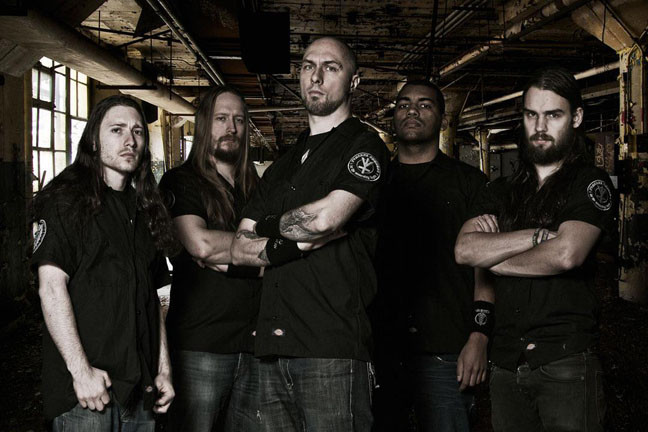 (Earlier this week we were thrilled to premiere a full-album stream of the new Aborted album along with BadWolf’s review. Today the album was officially released, and to celebrate the occasion we now bring a second review by TheMadIsraeli.)

I spent a lot of time earlier this month listening to a fuck load of Aborted, particularly Global Flatline and the band’s new serving of carnivorous delight The Necrotic Manifesto, back-to-back on repeat.  Global Flatline was a big deal for Aborted, earning them new fans and some return fans after a slew of albums that seemed mostly to have been met with indifference.  I never really understood the dislike or luke-warm reaction to the band’s 2005-2008 output; I quite enjoyed it, but it didn’t exactly click with a lot of people.  Global Flatline honestly may have been the band’s crowning opus since Goremageddon: The Saw and the Carnage Done.  As a result, The Necrotic Manifesto is an album that puts the burden on these Belgian butchers of doing some extreme heavy lifting to maintain a consistency of quality.

Other bloggers I’ve talked with who’ve had advance access to this album all seem to have different takes on this record.  Some feel it’s a continuation, a logical one, of Global Flatline while others think (as I do) that this has a much less refined, grittier, and more unrelenting flavor.  I also feel that there is quite a bit more grind present, whereas I thought Global Flatline was a straight death metal album.  The fact the band switched out guitar players has to be a huge factor, too; those who were replaced appeared on those last several records, including Global Flatline.  I mean, you can’t really argue with who they now have in the ranks — Danny Tunker, who has quite a resume, and Mendel Bij De Leij, whose latest solo release I reviewed recently and who is Sven De Caluwe’s bandmate in System Divide.  Yet I have to admit that I was curious about how these changes would affect the music.

This is definitely one of the most brutal albums made under the Aborted name.  I don’t know whether it’s the writing itself, the mix, or both (more than likely both), but this album feels like getting run over by a monster truck outfitted with weaponry from the most sadistically medieval to the most efficiently and deadly modern.  The riffs are substantially meatier; the drums are somehow even more present, bordering on completely blasting your fucking soul with gunshot wounds.  Mendel and Tunker bring the fucking shred, and are distinct from one another as guitar players, mostly in tone and phrasing, which is really cool.

Every riff is like getting hit over the head with a club of obsidian, and every volley of blast beats comes across as a reenactment of the Dresden bombing.  Everytime Sven vocalizes, it’s like being hit with a spray of weaponized battery acid.  The grinding flesh filet’s such as “The Extirpation Agenda” and “An Enumeration of Cadavers” are beautifully counterbalanced by brutalitarian bulldozers like “Coffin Upon Coffin”, “Cenobites”, and “Excremental Veracity”.  The train just never fucking stops, and I’m immensely impressed with the way Mendel and Tunker have managed to conform themselves into the Aborted sound and ethic on the guitar front.  It’s brutal deathgrind, but the riffs certainly sound like their version of a deathgrind album.

If I had to pick one album from this year so far to obliterate things to, it would be The Necrotic Manifesto.  Aborted have managed to craft a graceful, refined, yet merciless record that is on par with Global Flatline, but have done so while taking a slightly different direction.  At least for me, the band just continue destroying everything in their path, and right now they are doing it better than they’ve ever done it before.  This shit is the sonic death metal equivalent of the Nagasaki bombing. I fucking love this band and this album, and so should you.