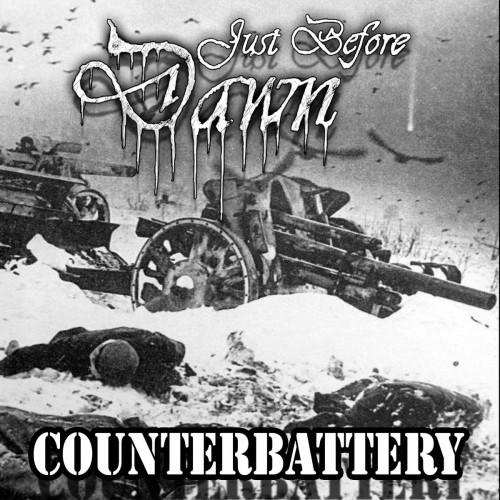 Early last month we were stoked to break a bunch of news (here) about the new album (The Aftermath) by Sweden’s Just Before Dawn and to bring you sample music from two of the album’s songs. Today, we’re equally stoked to introduce your ears to a new free single that JBD are introducing to tide fans over until The Aftermath becomes available. The new song is named “Counterbattery”.

In case you’re just hearing about JBD despite how often I’ve written about them, this is the project of musician Anders Biazzi (Blood Mortized), who in addition to being a talented songwriter, guitarist, and bass-player, must also have a silver tongue — because he always seems to succeed in assembling a stellar line-up of vocalists and guitar soloists for JBD’s albums. He’s succeeded again on “Counterbattery”.

On this new song his allies include vocalist Jonny Petterson and guitarist Håkan Stuvemark (along with drummer Brynjar Helgetun, who is the principal percussionist on The Aftermath).

“Counterbattery” is just goddamned pulverizing. There’s no other word for it. Everything about this rolling juggernaut of a song, including the production and Benny Moberg’s mixing and mastering seems geared to giving the song a truly massive, warlike sound — and Petterson’s vocals are equally crushing, just as Stuvemark’s whammy solo spews like a flamethrower.

Addicts of old-school Swedish death metal, this is your fix.

The song will soon be available for free download via the Bandcamp link below.

3 Responses to “JUST BEFORE DAWN: “COUNTERBATTERY””