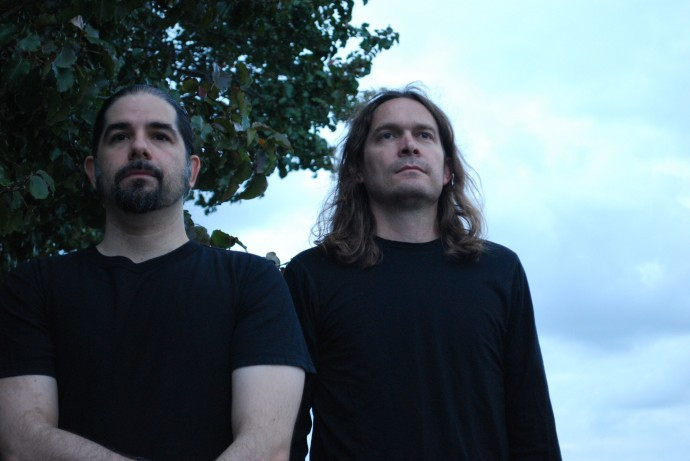 (Our Russian correspondent Comrade Aleks returns to our hallowed halls with an interview of Jeff Halberd of the band Realmbuilder, whose music you’ll get a chance to hear in this post.)

This duo creates their own worlds based on fundamentals of old school heavy and traditional doom metal, somehow keeping its raw and restless spirit, a thing which is rare nowadays. The project released its third full-length album Blue Flame Cavalry a few months ago through I Hate Records, and it provided a good opportunity to ask Jeff Halberd himself a few questions about it.

Hail Jeff! Thanks for your time; I believe that you’re busy as always so it’s much appreciated! As we speak about Realmbuilder I have to remind our readers of the fact that I Hate records has released your third full-length Blue Flame Cavalry in December of 2013. How does your creative life go since then?

Hail Aleks! Here’s J.H. Halberd. Czar is mired deep in the writing of his latest novel (he’s had at least two more published since we last communicated, including his spectacular horror-western Wraiths of the Broken Land).  My creative life is a little less rich than Czar’s, if only because I make most of my income as a professor instead of through the sale of my creative things, but I’ve had a pretty full last couple of years myself, writing a few new chamber works in addition to some recordings with my sleepy rock band bell monks and a lot of laptop improv performances. Czar and I are ramping up preparations for our next Realmbuilder sessions now, which are already about a year overdue because of a lot of the other work we’ve had going on. 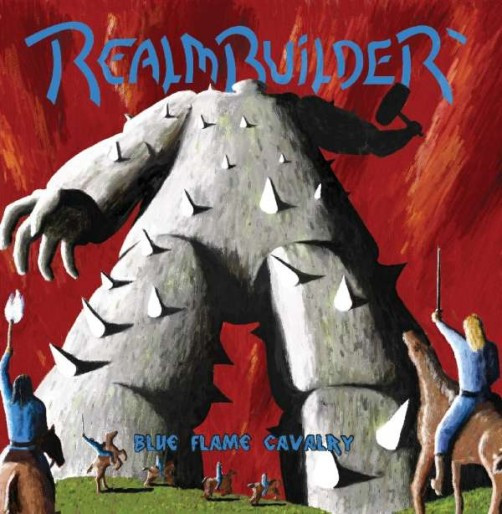 We were talking with Czar about 2 years ago and he said that you are going to create a really epic album for next time. “Next time” has already come, but there’re only 4 songs on the Blue Flame Cavalry” track-list even though I understand your grand plan for each of them. How did it happen?

For us, the term ‘epic’ describes our music with respect to the scope of the musical journeys we create for the listener.  On Blue Flame Cavalry, we built unique worlds for each of the album’s four songs, two of which – the title track and “Advance of the War Giants” – are the longest and grandest experiences we have yet recorded.  Between those two songs we have marching armies, religious chants, battle calls, distant winds, thundering gallops, and of course lots of heavy riffs and blistering leads (courtesy of the majestic Brian Koenig).  That’s how we approach epic music.

The new songs differ a bit from songs we heard on your previous work, Fortifications of the Pale Architect. Sometimes they sound technically more complex as you have become more skillful as musicians, but the elements which you use in the tracks are mostly same. Do you feel that you have a lot of space to grow in Realmbuilder?

We try to balance new growth and ideas for the band with writing and playing what we love.  The core of our sound will always include meaty riffs and catchy, distinct vocal ideas, but we push ourselves to think of new song structures and sounds that fit into the worlds we want to create with each album.  On Blue Flame Cavalry, the addition of the acoustic track “Adrift Upon the Night Ocean” was a surprise to us (it was the last song we wrote), but we felt that the album needed that song for balance in between the two giant tracks. As Czar is extremely driven to push himself with each new song he writes, I’m sure we’ll be doing something still different on this next one.

Is there any chance that finally Realmbuilder does finish keeping the balance between heavy and doom metal and starts to follow only one of these genres?

This is unlikely.  We love both heavy and doom metal, and a distinct part of our sound is in the balance between these genres.

What is your personal most significant advantage on Blue Flame Cavalry album? Do you set any goals before entering the studio?

Our primary goals for each album are to write better songs and create richer sonic experiences for our fans.  In the early stages of the songwriting process, well before we enter the studio, we discuss what kinds of songs and sounds we want to include, based on what we want the finished product to sound like as an album.  Our studio sessions are pretty intense, with massively long and exhausting days, so we need to have a pretty good sense of what we want to accomplish before we start, in terms of how many songs we want to record.

Each of new songs has its own story behind the lyrics, and the songs on Fortifications of the Pale Architect songs told their own stories too. Are there any connections between some lyrics on your different albums?

There is no connection between the lyrics on any two songs outside of the general environment or tone that connects our lyrics overall.

Okay, do you have a song or two left after the recording-session of Blue Flame Cavalry? Have you ever thought to release a split-album with another band of your kind?

There were no extra tracks lying around after we recorded Blue Flame Cavalry.  We are pretty ruthless with what we accept during the writing process, which keeps the discard pile to a minimum. We have not pursued a split, and I’m not sure that would fit our approach to world-building, though we might be interested if the right band were a part of it with us.

Why doesn’t Realmbuilder have a normal site or Facebook profile? Do I Hate Records do all the promo work for you well enough to forget about such things?

We are happy with the work that I Hate has done to promote our music.

Jeff, Czar is a professional writer, what is he working on now?

I can’t keep track of all of the projects that Czar has going at any one time, though I know that he has another novel coming out later this year, a crime tale called Mean Business on North Ganson Street.  And his sci-fi novel Corpus Chrome, Inc. was released a few months ago.  As for me, I just finished a concert-length work for flute, percussion, percussion quartet, and electronics and have recently started up on a new solo piano piece. 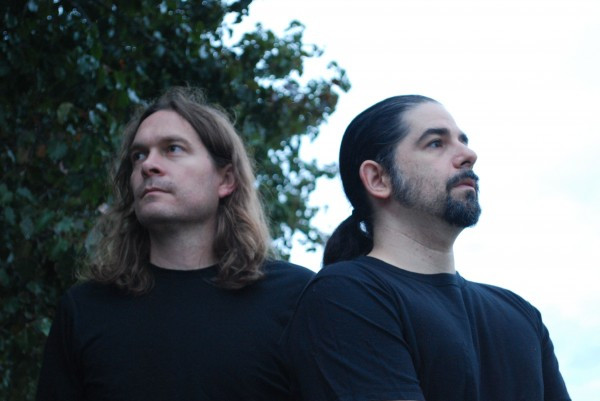 There are a lot of writers who work in the fantasy style nowadays, as real science fiction seems something forgotten. Some people know all the history of Tolkien’s Middle Earth, but when the media says that Russia goes into Ukraine, these people think that it’s somewhere near Finland or Italy and that orks from the tundra are riding on packs of bears, and so on. Don’t you think that most of us go further and further from real life, plunging deeper in virtual worlds?

It seems that technology has, rather than keeping us all more informed about the real world, given individuals more opportunity to get lost in their own individual spaces.  I won’t begrudge anyone for wanting to think about orcs riding on packs of bears, though I think our world would be better off if they also knew what was going on in Ukraine, if only because it could have an impact on the music put out by the fantastic Drudkh, Rattenfanger, Blood of Kingu, and other Saenko/ Thurios projects.

I had a kind of break on my work and found on my PC an old school game named Diablo (1996), that was cool yet I still have problems playing for magician. What kind of PC-games did you play? Or you were a loyal follower of Dungeons and Dragons from very beginning?

Neither Czar nor I is or was ever a big PC-gamer. We both loved Dungeons and Dragons as kids and still play some now when we can.  There is something magically immersive about D&D and similar role-playing games that don’t provide a corresponding visual image other than what is concocted in the players’ own minds.

And how do you think – what is a matter of success of series such as Warhammer and Game of Thrones?

It’s amazing to think on the success of Game of Thrones and of the increasing acceptance of fantasy in our society.  When the Lord of the Rings films began being released more than ten years ago, neither Czar nor I thought that we would get many more opportunities to see large-scale, high-quality fantasy productions, and so we both saw the films despite feeling like we might want to just save those experiences for the novels.  Since then, a palpable cultural shift has allowed for more commercial fantasy to be produced, though I still don’t think anything as epic as those three LOTR films exists yet.  Of course, I’ve not seen Game of Thrones, because I’d rather just save that experience for the novels.

So do you prefer paper books over digital stuff? And what are your plans for a vinyl edition of Blue Flame Cavalry?

I certainly prefer paper books to digital books. Ironically, the only digital book I’ve ever read is Czar’s A Congregation of Jackals, which worked out that way because of some stupid publishing stuff that isn’t very interesting.  But there is plenty of digital stuff that I like, and many things that I would probably prefer in digital form over some other system.  For me this primarily has to do with the original intentions of the creator and maintaining the integrity of those ideas, but not always.  I mentioned the LOTR films because, although those books are very good, there are lots of fantasy novels of a similar quality, and many that I like more.  But I can’t think of any comparable fantasy film experiences.  As for Game of Thrones – there’s a lot more to my reticence to watch the shows than simply a desire to save the experience for the novels.  In fact, I haven’t even started the novels, because I want to wait until they’re all done.  I’ve been waiting more than ten years now to start that first book (it’s sitting on my shelf).  But I’m a fan of GRR Martin, and expect I’ll ultimately prefer the novels to the show.  I’ll decide when it’s all completed.

There are currently no plans for a vinyl edition of Blue Flame Cavalry, though I hope someday that there is one.

Thank you for your time Jeff! That’s all for today, send my best greetings to Czar, and don’t forget to let us know when Realmbuilder blows the ancient horn again.

2 Responses to “REALMBUILDER — CHARGE OF THE BLUE FRAME BRIGADE”