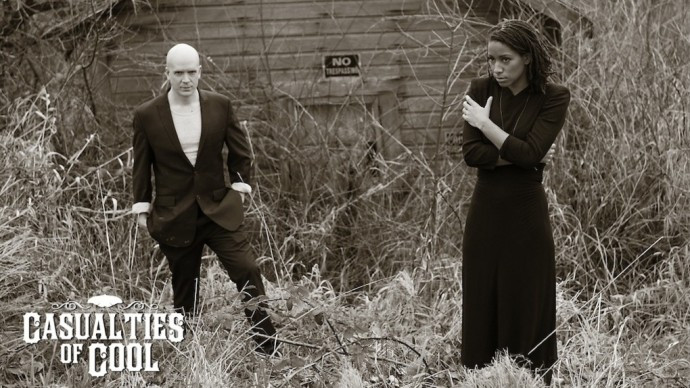 When it comes to Exceptions To The Rule here at NCS, there’s one man who’s clearly the most exceptional of all. And it’s a damn good thing too, because the music on Casualties of Cool is simultaneously fantastic, rewarding, and thoroughly outside of the usual NCS ethos.

In fact if I had to describe this one in simple terms, I’d call it “Canadian Space Country”.

Now, strictly speaking “Casualties of Cool” is the name of both the project and the album, since by Devin’s own admission what he’s made here is very much not a metal album, and in that sense stands outside his usual body of work. But really… this is Devin Townsend we’re talking about. I think we’ve all come to expect strangeness and variety from his music. That’s part of the joy and pleasure of the whole experience, never knowing quite what to expect!

Over the course of 15 tracks, some longer, some shorter, Devin and his many collaborators draw from a deep well of country and blues influences, intermingled with an undercurrent of otherworldly ambience, to weave an odd, conceptual tale of alien planets and celestial salvation, balancing light and darkness, hope and despair.

The retro traveller’s blues of “Daddy” starts things off, Ché Aimee Dorval’s ethereal vocals drifting across the void in waves of soothing emotion, tinged with an aching sorrow, leading the listener to the earthier, alien-country vibes of “Mountaintop”, whose ghostly strumming and phantom background radiation conjure a series of strange, synchestrated visions out of simple sound and silence.

The gorgeous lulls and subtle swells of “Flight” combine to make pure magic, Ché’s heartfelt voice rising and soaring with effervescent grace, carried aloft on a cloud of shimmering ambience and blossoming strings. By contrast, “The Code” is more grounded, based around a deeper, jangling guitar line, binding together a hazy atmosphere of flitting, electric lights and haunting female vocals with its solid simplicity.

“Moon” really captures a sensation of light, floating motion, carrying the listener across a barren, yet beautiful, landscape, mixing bluesy melody and proggy vibes with wandering country and injections of free-flowing cosmic jazz. This carries through into the chilling ambience of “Pier”, which slowly ticks down towards an inevitable ending, concluding the first part of this strangely compelling story.

Mixing melancholy melody with a spark of unvanquished hope, “Ether” provides us with a panoramic view of haunting musical motifs, eerie isolation and the spectre of infinity weighing down on the track’s soulful elegance and intricate, illuminating guitar work. The hypnotising allure of “Hejda” suggests images of alien vistas and ageless aboriginal wonders, but with an undercurrent of darkness and anxiety, querying and questioning in both fear and wonder as it drifts along its way.

The effortless black-clad cool of “Forgive Me” is possibly the album’s centrepiece, sending shivers down the spine with its undulating guitars and whispering percussion, Devin and Ché’s lithe voices intertwining in a gospel hymn of seductive harmony, before the unexpected and ominous chorus of voices that looms into view during “Broken” signifies the end of another stage of the album’s story, and the beginning of its final act.

The morose strings and spindly percussion of “Bones” provide a bleak, spectral atmosphere, despair and desperation overwhelming hope as Ché’s phenomenal, emotive delivery continues the tale of those who have fallen on the path to safety and salvation, drawn in and left stranded by her own siren song.

The bi-polar blues and overt Johnny Cash-isms of “Deathscope” meld mysteriously with Devin’s own inimitable style, infecting the song with unsettling interruptions of shocking static or shrieking distortion, drifting from manic to depressive over the course of 6 increasingly odd minutes, before the xeno-country ballad of “The Field” – a distant cousin to the material found on Ghost, yet very much the black sheep of the family, teases its way under your skin with its enigmatic melodies and shivering, tender touch.

Penultimate track “The Bridge” finds Devin at his most melodic and majestic, the song building slowly but surely towards the light, shedding the darkness and dread that has so far weighed upon the album. As uplifting as it is, it’s also a song that is at its most rewarding in the context of the album as a whole – the whole journey so far leading to this one life-affirming moment, climactic and joyous and free of fear – culminating ultimately in the meditative calm of “Pure”, a simple acknowledgement of what has come and gone, and the changes it has wrought upon us along the way. 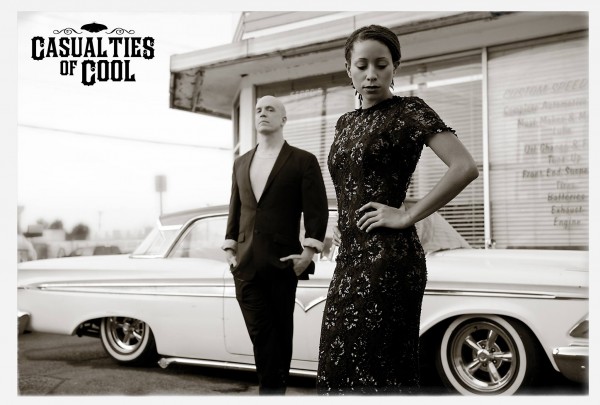 This is a strange album, there’s no doubt about that. A pretty damn fantastic album actually, but still strange. Yet it’s also very much still a Devin Townsend album. In amongst its soulful, bluesy darkness and unearthly country vibes one can still find echoes of the same mind that wrote Terria, Ki, and Ghost – haunting echoes on a haunting record. How apt.

Very much a concept album, both soothingly seductive and compellingly challenging at the same time, Casualties of Cool really is at its most rewarding and most fulfilling when experienced as a complete work. As always the story behind the album, as wonderfully esoteric as it is, is truly just a smokescreen for the darkly emotive, yet ultimately redemptive, journey which Devin wishes to take us on.

And it’s a journey I want to take again and again.

Casualties of Cool is available digitally and physically here: