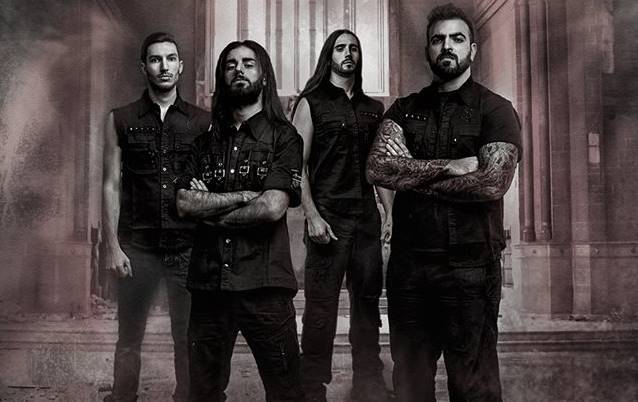 You would be hard-pressed to find another 2014 album more packed with super-heated fury than Regicide, the new album by Italy’s Hour of Penance. To borrow the words of our reviewer Andy Synn, it’s “utterly destructive”, loaded with a “wealth of punishing riffage, bloody hooks, and concentrated venom”, but with “subtle refinements and embellishments that the band have made to their familiar formula, tiny tweaks designed to increase its lethal virulence without compromising the ferocious core of their identity.”

In June, North American audiences will get a chance to see Hour of Penance decimate cities across the U.S. and Canada when the band embark on the Conquerors of the World tour with Septicflesh, Fleshgod Apocalypse, and Necronomicon. Today you can get a preview of the band’s potent live show through our premiere of the official Hour of Penance video for “Theogony”, which was filmed live at their recent headlining gig in Wakefield, England.

“Theogony” is a ripping, ravaging, bone-grinding assault, and the video, filmed from multiple camera angles, captures the full-bore explosiveness of the band’s performance. It will get your adrenaline pumping in short order.

Regicide is out now on Prosthetic Records. It can still be streamed in full at this location and can be ordered here. You can check out the schedule for the upcoming North American tour schedule right after the video — which begins now:

CONQUERORS OF THE WORLD 2014

4 Responses to “AN NCS VIDEO PREMIERE: HOUR OF PENANCE — “THEOGONY””