Were you paying attention yesterday? Did you see the post I wrote about the new, free Hells Headbangers compilation? Did you see that it includes a new track by the band Midnight? Well, if you did, you might have guessed what I’m about to confirm: Today, Hells Headbangers announced that Midnight’s new album No Mercy for Mayhem will be released August 19.

I’ve been waiting for this info because the band’s 2011 debut Satanic Royalty was one of my favorite albums of 2011. It sort of came out of nowhere (except for select people in the underground who already knew what was up with Midnight), and made quite a splash. I have little doubt the new album will get 10 times the exposure. There will probably be a full-album stream on NPR. Album teasers will probably be played in movie theaters before shows. Discount coupons in the newspapers.

Okay, probably some of those things won’t happen once the new Midnight promo shot gets into circulation. This is it: 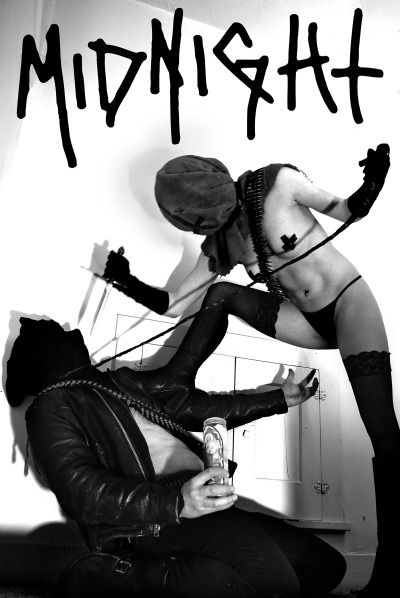 Yeah, probably not in the newspapers. I think there’s still a shot at getting it stocked at Target, though.

The press release I received says that “as an added bonus, initial CD pressings of No Mercy for Mayhem will include a bonus track and a whole bonus disc comprising MIDNIGHT’s super-limited Alive on the Streets of Cleveland live LP.” The press release also included the album art, which I think is cool.

I don’t know what good it does, in most cases, to publish track lists, but I generally like Midnight’s song titles, so what the hell:

Tracklisting for MIDNIGHT’s “No Mercy for Mayhem”

And by the way, if you answered all those questions at the top of the post NO, here’s the new Midnight song. And one of my favorites from the debut album, too:

6 Responses to “A NEW MIDNIGHT ALBUM IS COMING: “NO MERCY FOR MAYHEM””