(In this post we have Austin Weber’s interview of Youri Raymond, guitarist/vocalist of Montréal’s Unhuman, whose debut album Austin reviewed here.)

Except for a group of hard-core devotees and super-geeks like me, last year’s independently released self-titled Unhuman record came out of absolutely nowhere, catching the majority of the technical death metal scene by surprise. Yet that record was actually a very long time coming, with the majority of the songs originally dating back to 1999 and 2001.

I wanted to get the story behind what caused the album’s delay and all other things Unhuman related. While French is his principal native tongue, Unhuman’s main composer, guitarist, and vocalist Youri Raymond did a fine job deciphering the garbled language I speak and answering back in English. After the interview you can find links to some of the bands Youri mentioned in the interview.

How’s it going man?  How does it feel to finally have your long awaited Unhuman album finally released?

Honestly, it feels really good, especially after all these years of work.

I’m curious as to why it took so long for the  album to come to fruition?

Well, at first, I really wanted our line-up to be 100% solid, with self-taught musicians if possible. Then, once the line-up was strong enough for my tastes, we needed the money. You know, to have the best production possible. Then, when we finally hit Chris Donaldson’s (Cryptopsy) Garage studio, our previous guitarist quit before recording his guitar parts. So I had to re-learn/re-compose them. Then, at the end of the bass recording, after recording bass for 9 songs out of 10, our bassist quit too. That’s why it took so long to finish it. That, and the fact that I joined Cryptopsy in 2009, and that didn’t help out either. It’s like having children I guess: it seems that the first one to pop out is the most painful!

I first heard about you, and by extension, Unhuman, because of your work with Secret Chiefs 3. How did you end up getting the opportunity to work with Trey Spruance?

I booked a show with the very excellent Estradasphere back in the day here in Beloeil (Montreal’s south shore). The guys really liked our music and my vocals and they told Trey Spruance about me. He then called me and he came to my home to record the songs that feature on Book of Horizons. He stayed at my place for 3 days. We drank good strong beers, ate good food, visited my area and relaxed for the first 2 days. Then on the third day, we recorded all vocals and had a lot of fun doing it. He also asked me if I’d like to so some more stuff this year. I really hope it’s gonna happen. Trey Spruance is a genius! 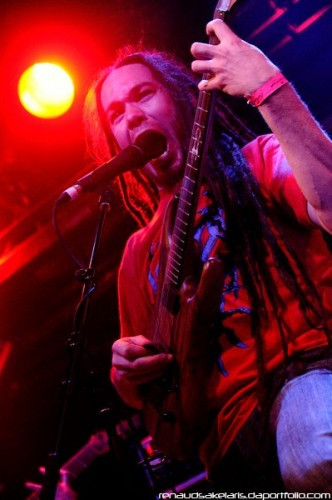 With 7 of the songs on the album being older material, does this mean there are already more finished Unhuman songs?

Of course! The second album will be recorded somewhere in late 2014/early 2015. We already play a few new songs live!

Will the next music still be mainly composed by you or written as a group this time?

Well, of course, I compose the major parts of the songs, but it’s not necessarily always the case. As an example, we have a newer song that took life while Mathieu Bérubé was jamming on bass with our drummer Alex Dupras. When I came in the jam space, I found their groove insane, so we started composing a song built around some “Primus-influenced” bass riffings, along with some “Santana-like” grooves and the song ended up being a mix of those influences along with a “Punk Rock” debut riff and some more dissonant/weird riffs at the end. So even if I love composing songs, bass parts, drum beats, guitar riffs and patterns that are difficult to sing while playing technical guitar riffs — if the guys come in with any good ideas that fit the Unhuman sound, why shouldn’t we consider putting it in a new song?!

I doubt you all would ever play the US, but what if by chance say Beyond Creation or someone else took you out with them if they toured here? Would you all consider that or are day jobs too big of an issue?

Sincerely, we’d love to tour the US someday. Time will tell what will happen, but it’s certainly our goal to do as many shows as possible inside and outside Québec. If a nice tour shows up and we’re all available, why not? We all have daily jobs, of course, but it would be insane to get on tour someday!

Beyond the music being great I really enjoyed your varied vocals on the album. How do you manage to pull off doing vocals and guitar live? Are there any songs you don’t like to play live because of this?

Yeah, I really like technical/complex stuff. The most “pain in the ass” songs of the album to play and sing together are “Chaotic Equilibrium” and “Once Again”. But sincerely, I’d rather have fun suffering while playing music than suffering by playing boring music.

Did you all try and get this released through a label or was the plan to release it independently all along?

We just wanted it to be released, no matter if it was with a label or independently. We finally printed the CDs ourselves and have absolutely no regret about it. But we still hope to get signed someday, maybe for the second one. We’ll see!

How’s Canada’s beer/bud currently treating you all? What’s your favourite microbrew from Canada?

Aaaaaaaaaah, Weed! It’s such a shame it’s still illegal today. I mean, come on, everybody knows a lot of shit is way more destructive than cannabis. As for the microbreweries, there are a lot of insane ones, especially here in Québec. Let’s name a few: Dunham, Dieu Du Ciel, Le Castor (their Yakima IPA is simply insane), Pit Caribou, Les Brasseurs du Monde. Too many to mention! 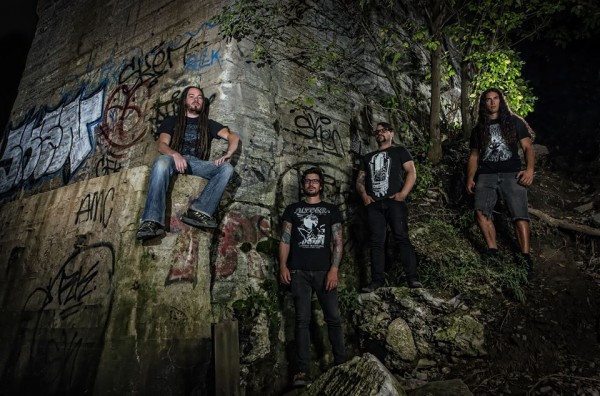 How did you first get into metal and why do you enjoy it?

Alex Dupras was from the “core” scene of the 90s and freaked out when he first heard Deicide, Cryptopsy, Morbid Angel, Dying Fetus, and such stuff. At that time, we started jamming together and have never stopped since then. Kevin Charte likes heavy metal a lot (he’s a soloist, you know, ahah!), but is also into extreme metal ala Animals As Leaders, Psycroptic, Necrophagist, etc. Mathieu Bérubé is the most chaotic music monster of the band. I mean, he can listen to the most fucked up unknown noïsy band ever (Behold… the Arctopus, Deathspell Omega, etc.) and 2 minutes later, he’s listening to blues, jazz, whatever. As long as it’s good music I guess. Then I’m the one who jumped from New Kids On The Block, to NOFX, and then old school Death, Carcass, Entombed, Cynic, Cryptopsy, etc. I always listened to the old classics. Not that I’m not into new metal bands, but I prefer world music, punk rock, and “Estradasphere/Mr. Bungle” kind of bands as far as what I usually listen to.

Your lyrics have philosophical and reflective themes that I quite enjoy. What would you consider your lyrical influences?

Tough question. Maybe a little bit of Cynic, Gojira, Death (for sure). But honestly, it all comes from reflection, meditation, deep thinking, and life experience. It’s both personal and general in my opinion.

Why should I give a fuck about poutine?

Because you like good beers, and it’s the best combo in the world. Once you’re drunk and getting out of bars, what you need to absorb all that alcohol is a juicy poutine with a ton of “squick squick” cheese and disgusting brown sauce on the top of a mountain of greasy french fries. And if you ask yourself if it comes from Drummondville or Victoriaville, the answer is pretty simple: On s’en Tabarnak, c’est notre met national et dégelassement bon, c’est tout c’qui compte! (Austin’s Note: I do not know French and a language translator gave me a weird incomplete translation.)

What are some good Canadian metal bands you would recommend you think I wouldn’t have heard of?

Well, you probably know them more than me, but First Fragment, Brought By Pain, Teramobil, Politess, and Deviant Process are all good Canadian bands. 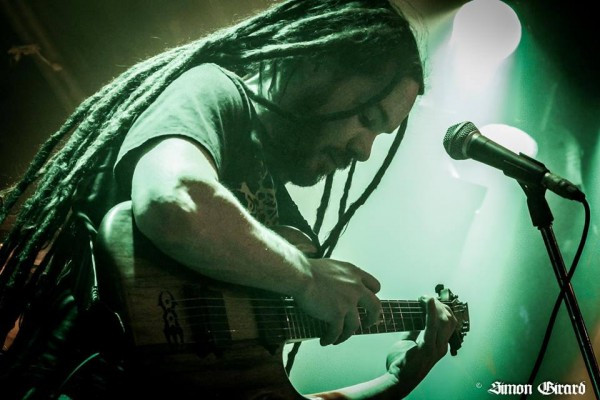 Are you still considered a member of Cryptopsy or do you just play live for them now?

I came in after the Unspoken King album, toured Canada, Europe, and USA. Recorded on The Best Of Us Bleed (both guitars and bass). I then switched to bass when Jon Levasseur came back in the band. I quit the band just before the self-titled Cryptopsy album was recorded. Then I came back in the band on guitar for some more shows here and there including Tokyo in Japan when Jon quit, and finally I left the band in 2013.

Did you enjoy your time spent in Cryptopsy, and what all did you help write or contribute to on their new album?

Of course I liked my trip with Cryptopsy. What I miss the most is touring, playing Angry Birds with Oli, having “drunken/philosophic/esoteric” discussions with Chris, and partying with the band and fans. I miss our personal stage bartender Steve Burns a lot too! As for the self-titled Cryptopsy album, I composed riffs in “Shag Harbour’s Visitors” and “The Golden Square Mile”. That was pretty much my contributions to the album.

I composed “A Graceful Demise” and “Holodomor” all alone. We never jammed those songs. All I did is I tried to fit the Cryptopsy sound and composed those two songs entirely while Eric Langlois wrote “Boden”. And yeah, I did some vocals and screams on the 3 new songs. Listen carefully, and play “Where’s Waldo?” with my voice.

I know you’ve popped up on guests spots for bands such as Augury and Beyond Creation. Do you have any albums coming up you are excited to be guesting on?

Oh yeah! I did guest vocals for Amogh Symphony from India, Killitorous from Canada, Ma’anish from Israel. And of course, I really hope Trey can come over to record a chapter of the upcoming Secret Chiefs 3.

Anything else you’d like to add before this interview comes to an uneventful conclusion?

Well, thank you for supporting us. Feel free to share our music all around. It’s not super easy to be an independant band. But the real fans will enjoy our music, that’s all that matters! Check it out soon for more material and thank you for the interview! Peace out!