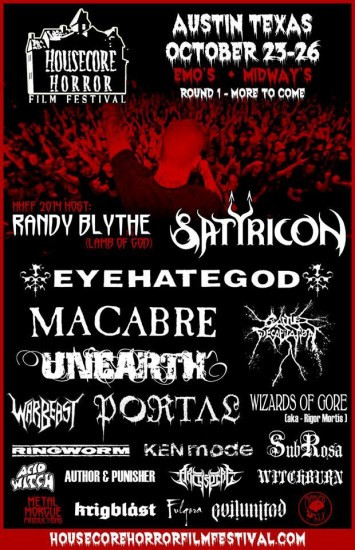 Well, that flyer up there made my eyes pop open big time. It lists the first round of bands confirmed to perform at the second installment of Philip Anselmo’s Housecore Horror Film Festival in Austin, Texas, on October 23-26, 2014. As the name suggests, there will be horror movies, too, but they could be looping My Little Pony cartoons all weekend and I wouldn’t much care. Because look at that line-up of bands!

Acid Witch on the same line-up as Archspire!

What strange and wonderful partnerships. And this is just the first round of bands, with more to come. And if you’re wondering about the appearance of Randy Blythe’s name, here’s what the organizers said on their Facebook page:

“Randy Blythe is our special guest host. He’ll be sharing stories of his life in between band sets, introducing some of his favorite bands, and screening the documentary film, AS THE PALACES BURN and doing a Q&A afterward. He’ll be there the entire weekend and we are stoked to have him!”

Especially since this is taking place in my old hometown, I’m very excited, and very eager to see the rest of the bands who will be appearing. And Austin is a damned nice town, and by late October it won’t be broiling hot. More like lukewarm.

I haven’t seen any info about what movies will be shown at the film part of the festival, other than As The Palace Burns, but see above re My Little Pony.