(Andy Synn wrote this review of the new album by Sweden’s Vintersorg.)

So it’s probably worth starting out this review by clearing something up. When Vintersorg (Andreas Hedlund and Mattias Marklund) announced that they were going to release an interlinked quartet of albums, each based on one of the four classical elements, I’m sure that a lot of you, like myself, initially expected each one to be quite different from the others, as befitting the divide between the elements themselves. Something akin to the way Thrice explored very different tonal and musical textures with The Alchemy Index I-IV, perhaps.

Well, we were wrong about that it seems. With the release of the first two albums, Jordpuls (“Pulse of the Earth”) and Orkan (“Hurricane”), which dealt with the elements of earth and air respectively, it became clear that the band’s core sound – a melding of archaic, folkish melody and blackened, progressive metal – remained enviably focussed and largely unchanged.

That’s not to say there weren’t differences between the two albums, of course. Jordpuls certainly possessed a certain earthy flavour and an ageless tone, while Orkan captured the flighty, intangible nature of the wind remarkably well with its ethereal song structures and skittering flutes. But, ultimately, neither was a major shift in style or sound for the band. And that’s ok. They weren’t meant to be.

Really, this whole experiment is more about filtering and refining the established Vintersorg sound in interesting, incremental ways, than it is about altering it wholesale. It’s about changing the little things, the small shifts in focus or delivery, adding a few deft touches and artful rearrangements here and there, all designed to re-envision the band through a different, elemental lens. 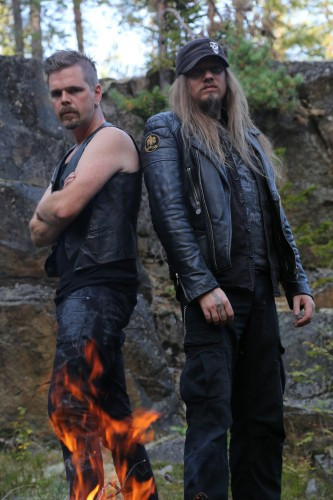 Naturbål (“Nature’s Bonfire”) is part three in the duo’s conceptual saga of the four elements and deals, unsurprisingly, with fire. But not just fire in the clichéd, destructive sense. Instead, it approaches fire as a primal spark, a driving force, both destroyer and creator, a burning energy that underpins existence, from the ground beneath our feet, to the stars so far above us.

As a result it’s an album that positively bristles with life and burning passion, writhing with blazing intensity even as the duo’s progressive inclinations lead the listener through a multitude of interesting twists and turns, all without sacrificing an ounce of captivating melody or primal power in the process. Along the way some particularly interesting and unexpected touches help separate these songs from those found on Jordpuls and Orkan, without ever abandoning the core and instantly recognisable Vintersorg sound.

Opener “Ur aska och sot” is seven minutes of blistered, blackened melody and driving volcanic rhythms, topped off by a flowing back-and-forth between male and female vocals, whose warm tones and flickering melodies breathe new life and new creation into the band’s familiar, yet always fantastic, formula.

The rippling acoustic guitars and supple keyboards of “Överallt och ingenstans” soon give way to an array of vicious vocals and scything riffs, backed by some particularly punishing percussion, eventually leading to a phenomenal melodic chorus which erupts almost out of nowhere, taking the song to a higher level. As it continues to grow, interjections of strummed acoustic guitar provide a prelude to a suitably electrifying guitar solo, before the whole thing climaxes in an alchemical mix of melodic sound and metallic fury.

As you may have noticed by now, the more overtly folky elements of the band’s sound are downplayed just a touch on this album, leading to a corresponding increase in blackened ire and symphonic majesty, which helps further subtly separate the album from its brethren. Both “En blixt från klar himmel” and “Lågornas rov” are a clear testament to this, with a heavier focus on heavier riffing, heavier drums and a frankly heavier sound all around. Though both make ample time to explore the limits of the band’s massive, multi-faceted vocal approach and grasp of captivating, archaic melody, of course!

Simultaneously both darkly powerful and gloriously evocative, the rippling tremolo guitars and juddering kick drums of “Rymdens brinnande öar” combine into a blazing metallic inferno, through which sweeping keyboard melodies and flowing voices – both male and female – dance with carefree abandon.

This is followed by the awe-inspiring grandeur of “Natten visste vad skymningen såg”, one of the most melodic and uplifting songs on the album (perhaps of the year) – with shades of early Amorphis to its melding of beautiful harmony and bestial fury – and the more aggressive, progressively complex “Elddraken”, which matches intricate, soaring melody with eruptions of overwhelming, elemental fury.

Proving that fire and passion do not preclude a touch of patience, “Urdarmåne” (at nearly 8 minutes, the longest song on the album) takes its time to kick into high gear, adopting a slow-burn intro of scintillating acoustic guitars and deft keyboard embellishments that sets the stage for the progressive odyssey which follows. Over the next several minutes the song moves seamlessly from blackened wrath to melodic contemplation, a conflagration of dynamic sound and vision that spreads to moments of majestic symphonic grandeur and instances of dense, metallic force, always changing, always in flux, furiously and fundamentally alive.

The album concludes with “Själ i flamma”, whose irresistible energy and gleaming melodies provide the perfect finale for this rapturous blaze of electric energy and soaring sound. The song’s epic, cosmic chorus refrain is a true thing of beauty, lithe and supple and brimming with life, and truly is the icing on the cake for a song absolutely bursting with scorching riffs and monumental hooks and an irrepressible creative spirit. 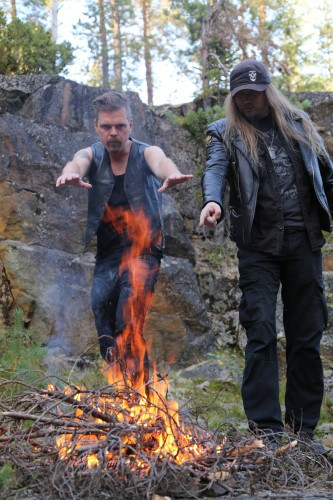 I’ll tell you now, this really is a fantastic album. I’ve always been a fan of the band, but this one really took me by surprise with just how truly passionate and driven it sounds.

Though it may not make any drastic changes to the band’s formula, it’s the small touches, the intriguing moments, and the renewed fire (no pun intended… well… not entirely) that really make it stand out in its own special way. There’s not a single weak track to be found, with each one possessing its own identity and its own particular hook, while every instrument, every element (again, pun not entirely intended) of the band’s sound has been refined to near-perfection.

Naturbål (“Nature’s Bonfire”) will be released in North America on July 8 by Napalm Records, on June 27 in the G/A/S countries, and on June 30 in the UK and the rest of Europe. It’s available for pre-order here. Below you can watch the first music video in Vintersorg’s history, for the song “Lågornas rov”.

One Response to “VINTERSORG: “NATURBÅL””