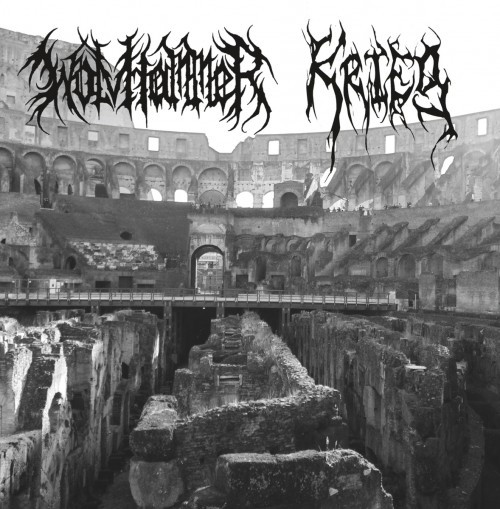 Two of my most highly anticipated 2014 albums are Crawling Into Black Sun by Wolvhammer (due for release by Profound Lore on July 8) and Transient by Krieg (coming from Candlelight Records in September). And today Broken Limbs Recordings has released a split by both of those bands that just provides more reasons to get stoked for the coming albums.

Wolvhammer’s contribution to the split is “Slaves To the Grime”, an alternate version of a track that will appear on Crawling Into Black Sun.

I’ve heard the album version, which is a standout song — a body-moving bulldozer of concrete-heavy riffs and vocals that are acid enough to etch glass, with other alternating segments that lumber into a sludgy, soul-sucking abyss and gallop like a hell-horse. The version on the split is, if anything, even more thoroughly pulverizing. The production gives it a thoroughly radioactive quality, and it’s shot through with bolts of squealing, squalling lead guitar, like that crazy part of your brain trying to get out of its prison. And man, when it hits those doomed, dragging segments, it falls like granite blocks dropped from a great height.

Truth be told, I like this version even more than the album track (and I’ve been a big fan of that one since the first listen) — completely crushing, but also infectious enough to warrant a call to the Center for Disease Control.

This is the second split from this long-running solo project of N. Imperial (Neill Jameson) that I’ve reviewed this month, the other being a really strong release with Ramlord (discussed here) that’s coming on July 15 from Unholy Anarchy. Krieg’s song on this split is “Eternal Victim”, and supporting N. Imperial on the track are D. Weston-Ball (guest vocals), A. Poole (guitar), D. Zdanavage (guitar, bass), and J. Dost (drums).

“Eternal Victim” makes for a good pairing with the Wolvhammer track — it’s corrosive as hell, while also exerting a magnetic appeal on the reflexive part of your mind that wants to get you off your ass and in motion. The song really moves, too — from a predatory kind of doomed stalking, to a more rocking gallop, to a spine-spearing headbang fest, to a rolling wave of tremolo-razored melodic black metal. All the while, the vocals scar the senses with pure venom.

In a nutshell, this is a thoroughly riveting split by two very talented bands that not only will whet your appetite for the albums to come but is very much worth having in its own right.

You can order the split on vinyl from Broken Limbs Recordings here. It’s available digitally via the Bandcamp link below, and the stream is below the links.

2 Responses to “SHORT BUT SWEET: A WOLVHAMMER-KRIEG SPLIT”