Once again I waded through the fetid swamp of the interhole this morning in search of new things worth blabbing about. Once again, I found new riches in the muck. Here are three of them.

If you think I’m ever going to get tired of pimping Sólstafir, think again. My pimping energies are endless. The latest excuse for writing about them is today’s premiere of yet another new song from their next album, Ótta, which will be released by Season of Mist on August 29 in Europe and September 2 in North America.

The new song is named “Lágnætti”. From the slow piano chords, the sound of strings, and Adi Tryggvason’s plaintive vocals at the beginning, the song builds in intensity with a driving beat and riffs that moan and claw at the sky. Tryggvason’s voice turns searing, but the haunting melody persists through to the end, the piano and the distorted guitar chords forming a duet that sinks it home. Wonderful.

To stream “Lágnætti”, go to this place (and pre-order the album here, or you and I will be having some words):

Pallbearer’s new album entitled Foundations of Burden and it will be released by Profound Lore in NorthAm on August 19. When I first wrote about that news, I said I had very high hopes for it, because 2012’s debut album Sorrow and Extinction was so good. From what I just heard, I don’t think I’ll be disappointed.

The first taste of new music came today via NPR’s premiere of “The Ghost I Used To Be”. It’s a 10-minute amalgamation of slow, earthquaking riffs and high, cloud-catching vocals, beautiful piercing guitar leads and stone-splitting percussion. It’s intensely melodic, heavy and hard-rocking, and funereally staggering and somber — it’s all those things, and really damned catchy, too. I love it.

Go here to form your own opinions, but loosen up your neck muscles first (Pallbearer’s FB page can be reached with this link): 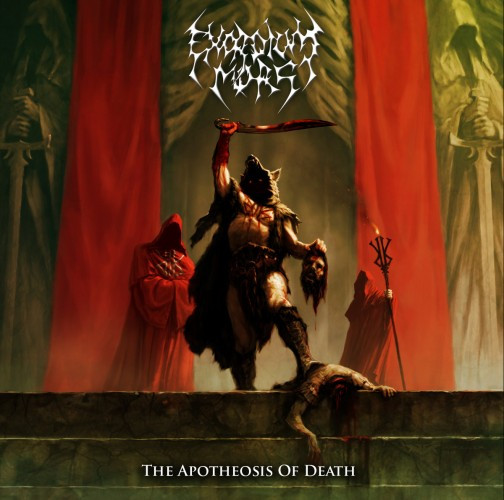 Honestly, I’m getting kinda tired sending you off to other places to listen to music, so for the third song in this collection I’m including a track you can stream right here in the cozy ad-free confines of NCS. This song is named “As the Vultures Descend” and it comes from The Apotheosis of Death, which is the debut full-length by New Zealand’s Exordium Mors and which features fantastic cover art by the one and only Nick Keller.

The mere fact that the band are rooted in New Zealand should give you a guess about their sound — and if you guessed that it shows no mercy, you’d be right. It’s a ripping ride, that’s for damned sure — a black thrashing attack that jams the electrodes into the brainstem and jacks the voltage. Lots of full-throttle guitar and bass work, lots of galvanizing drumwork, and a very cool howling vocal performance. I feel like running into traffic like a crazy man, but I’ll try to resist the impulse long enough to embed the song below.

The Apotheosis of Death will be released by the Mexican label Iron, Blood & Death Corporation on July 8 (July 5 in NZ). Check out “As Vultures Descend” through the lyric video or the Bandcamp player here:

6 Responses to “SEEN AND HEARD: NEW SONGS FROM SÓLSTAFIR, PALLBEARER, AND EXORDIUM MORS”