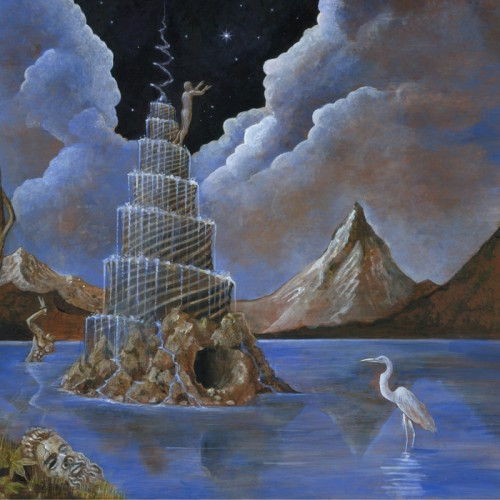 The new album by Spectral Lore (III) has more facets than a passion-cut diamond, and it shines just as brilliantly. So much care and craftsmanship have been devoted to its creation that it’s one of those rare metal albums that rises to the level of a work of art — except it’s only partially a metal album. And therein lies much of its appeal.

With a run-time of almost 90 minutes, it’s the longest album I’ve listened to in years, which is one reason why this review comes later than I had originally planned. It’s also not an album that can be fully appreciated by listening to a track here and a track there, as time permits. It’s best heard as a whole (at least as I hear it — I have no inside knowledge about the artist’s intentions). Each song brings its own rich rewards individually — indeed, most songs are themselves dramatic sagas in sound — but when you listen without interruption from start to finish, you feel as if you’ve discovered secrets hidden from the eyes we use to observe our daily lives, as if the surface layers of our routine existence are being peeled back to reveal something more profound. The music seeks transcendence, an escape from the crushing weight of the world and its manifold tyrannies, and it comes very close to finding it.

The album is divided into two parts, denominated “Singularity” and “Eternity”, with four songs in Part I and three in Part II. With the exception of the album’s first song “Omphalos” (which is “only” 7 1/2 minutes long), the individual pieces are epic-length works ranging from roughly 11 minutes to more than 16.

Both within and across the songs, the music ranges from the vast and panoramic to the introspective and intimate. It moves from passages of disorienting dissonance to explosions of well-choregraphed mayhem, from warlike gallops to moments of shining benevolence and the glow of hopefulness. But whether the music is storming like a maelstrom, with blasting drums and ravaging waves of guitar distortion, or shimmering like a sun-lit stream, it’s almost always dense and richly textured, often to the point of being senses-flooding in the richness of its construction.

The variety of moods and the range of movement in the music is as much a hallmark of the songs in Part I as of those in Part II, though the atmosphere of the music in Part II is generally more upbeat and uplifting, as if the spiritual quest for a significance greater than what exists in the rooting of flesh to the Earth has turned onto the right path at last.

Within Part I, “Omphalos” is the most ripping and ravaging and the least melodic of all the songs. What melody exists comes almost entirely from the sweeping sounds of a synthesized choir behind a storm of blast-beat drums and grinding, dissonant noise, or from the nimble notes of a bass guitar that surface when the maelstrom briefly ebbs. In addition to that attention-grabbing bass work (which reappears throughout the album), “Omphalos” also introduces the listener to Spectral Lore’s vocal mix, which includes scarring howls, abyssal roars, and agonized clean vocals that cry out in yearning.

“The Veiled Garden” begins like a funeral doom song, bleak and wretched and choked in dissonance, but then builds in intensity. It howls and squalls and gallops, it pummels like a jackhammer — but it ends in an almost pastoral acoustic-guitar-and-flute duet (against a grinding background of distortion).

“The Cold March Towards Eternal Brightness” may be my favorite single song. It moves from the rumble of thunder and a deluge of harrowing sound (with rippling tremolo guitar and anguished vocals fighting to be heard through the tempest) to a keyboard-bolstered passage that gives the song an air of majestic grandeur and panoramic vistas. Jagged riffs combine with heart-bursting melody, the sound of brass and strings appear in a dramatic orchestral interlude, and then the song ends in a glorious warlike charge with a folk-influenced melody that would be right at home in a Viking metal album.

There’s an air of the epic in the first song of Part II as well, but “Spiral Fountain” also includes a galvanizing eruption of raging, writhing guitars and pummeling drums — along with a mystical acoustic guitar melody, cinematic keyboards, and a progressively-minded lead guitar performance. Epic melodies reminiscent of Nordic pagan/folk metal are a part of “A Rider Through the Lands of An Infinite Dreamscape”. They give the music a sense of questing, struggle, and discovery. The song also includes piano and timpani, flute and strings, shimmering keyboards and one of the album’s few hard-punching riffs. Like the song before it, this one also ends in a charging finish, with soaring keys and galloping drums, that seems tailor-made for the soundtrack to some Nordic saga.

Each of the two Parts of the album closes with an instrumental piece. The Part I instrumental, “Drifting Through Moss and Ancient Stone”, is carried largely by acoustic guitar, piano, and flute against a backdrop of deep droning sounds, like the slow bowing of a bass violin. Here and there, the guitar finds a rhythm and a folk melody emerges, but more often the music is meditative and meandering, the melodic notes often sparse and widely spaced.

Part II, and thus the album as a whole, closes with the most surprising of the seven tracks. The first half of “Cosmic Significance” sounds like something from an album by Sweden’s Lustre. Almost entirely keyboard-driven, it establishes a simple, repeating motif and then layers it with the notes of what sounds like a Hammond organ, ethereal synthesized ambient sounds, and mystical reverberating tones. It sounds… cosmic… and it’s broken in only two places by drumbeats that reestablish the pull of gravity, once by the sound of slow timpani and once by a martial tattoo. But in the second half, heavy riffs come in over all that shimmering, fluttering lightness and the song moves into a surging race, vibrant tremolo chords tracing an almost Celtic-sounding melody and the music again taking on an epic air of struggle and triumph.

There’s no pithy way to pigeonhole this album. It’s part black metal, part avant garde, part pagan/folk, part doom, part progressive, part classical, and partly the soundtrack to a widescreen saga. It’s a challenging listen, not only because of its length but also because much of the music is harsh and discordant. But it’s also electrifying, fist-pumping, and sublimely mystical. It will turn you inward and it will pick you up and carry you far outside yourself.

In nutshell, III is a remarkable work, grand in its ambitions and worth heralding widely for its achievements. It’s all the more wondrous because it’s the work of a single man, a Greek artist known as Ayloss, who apparently not only composed and performed everything but also produced the recording. It took him more than five years to finish, barring a three-month period in 2012 during which he wrote and recorded the last Spectral Lore album (Sentinel). After a success of this magnitude, it’s difficult to imagine what he might do next — or what might be left for him to do. Finding out will surely be worth the wait.

The album’s multi-faceted wonders extend beyond the music. The double-CD case (which sits in front of me as I type this) is a tri-fold digipack, the exterior of which, when laid open, reveals the complete artwork by Benjamin Vierling in the right two panels and a detail from it on the left (click the images to enlarge them): 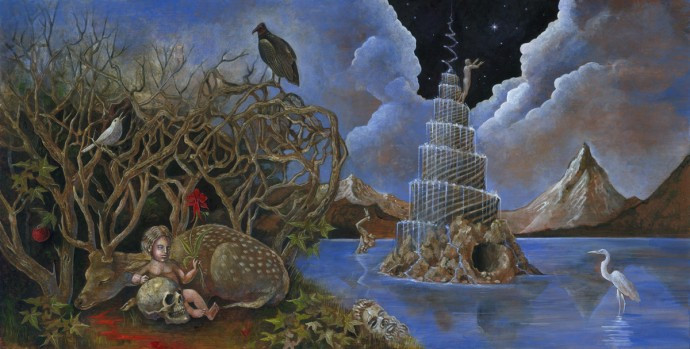 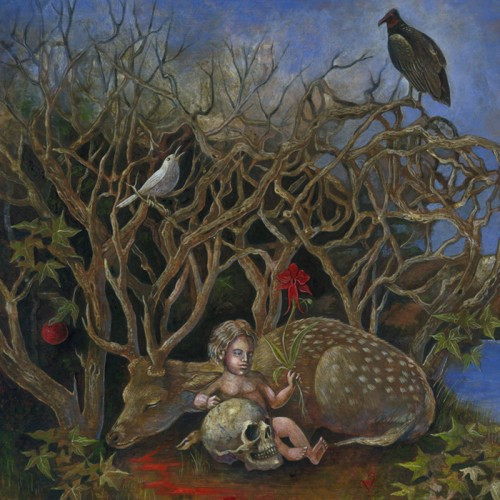 Vierling has created compelling pieces of art for other bands, including Aosoth, Avichi, Watain, Christian Mistress, Weapon, and Nightbringer, as well as Spectral Lore’s last album, but this painting is surely one of his best.

On the interior of the tri-fold you’ll find the two CDs themselves, which display other details from Vierling’s painting, as well as a beautiful  20-page lyric booklet in the middle slot, with layout and art direction by Francesco Gemelli. The poetic lyrics themselves are also part of the art, a journey through a dreamworld and a questioning meditation on lasting virtues, worthy goals, and the necessity of transformation. Even if you’re not the kind of fan who usually feels the need to buy physical copies of music, this one really is worth having. 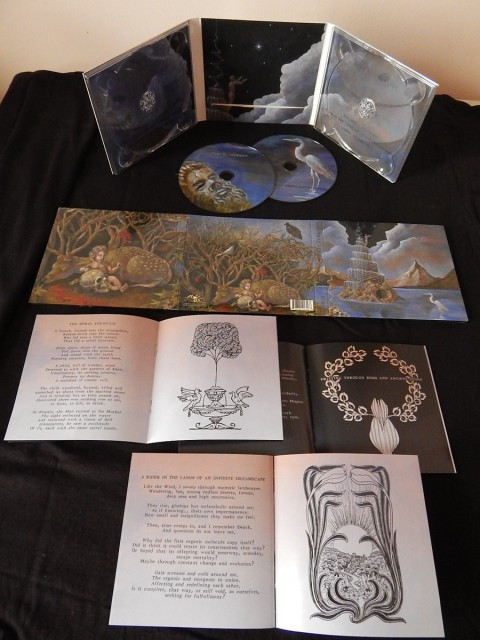 For more information about the album, visit I, Voidhanger at this location. It’s available for order or download here: