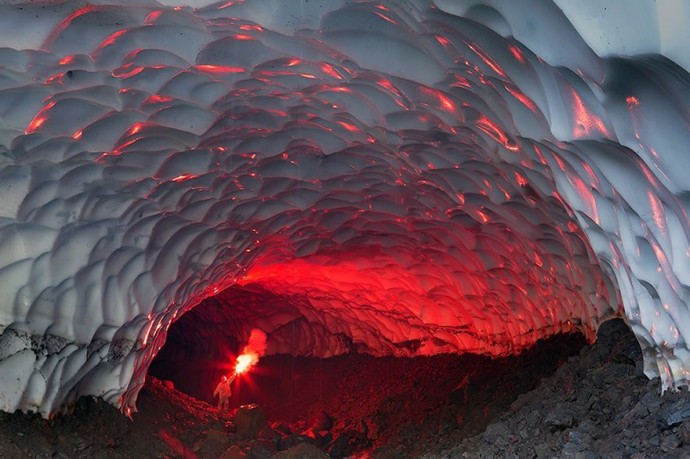 I hang my head in shame: Almost two whole months have passed since my last THAT’S METAL! post. Even by my own lazy standards, that’s pretty terrible. I have excuses, but they’re not very good ones. I’ll just keep them to myself and get on with it.

Because so much time has passed and I’ve collected so many items, this will be a super-sized edition. And if you’re stumbling into this series for the first time, it’s devoted to images, videos, and news items that I think are metal even though they’re not metal music.

As usual, we begin with a photo. Actually, the first six items in this collection involve photos. The first one is above. It was taken by Russian photographer Denis Budko inside a cave near the Mutnovsky volcano in Kamchatka, Russia. The unusual visual patterns were created as snow inside the rock tunnel melted. Here are a couple more (and still more images can be viewed at Neatorama, which is where I found them). Fire + ice = metal. 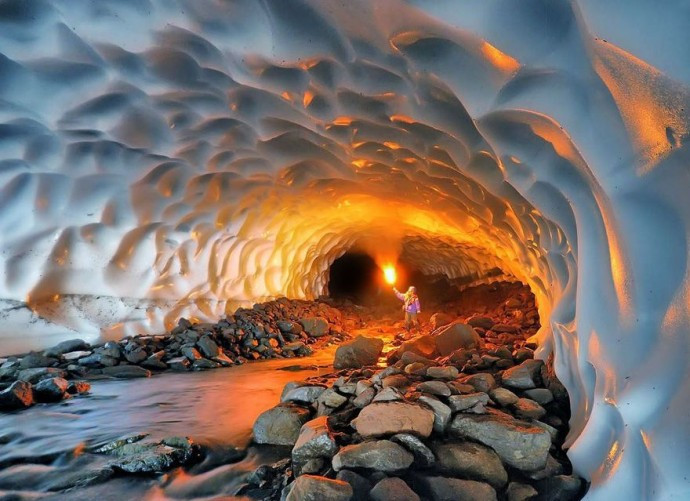 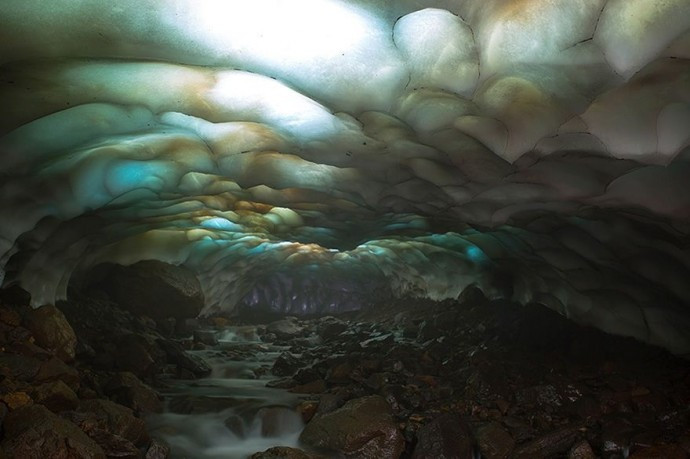 This next photo shows a urinal in the men’s room at The Mini Bottle Museum in Oslo, Norway. I don’t know about you, but if I were standing in front of this thing, I’m afraid I would experience paruresis.  (And now you’ve just learned a new word, haven’t you? And if you already know that word, my condolences.) Still, this is definitely metal, in more ways than one. 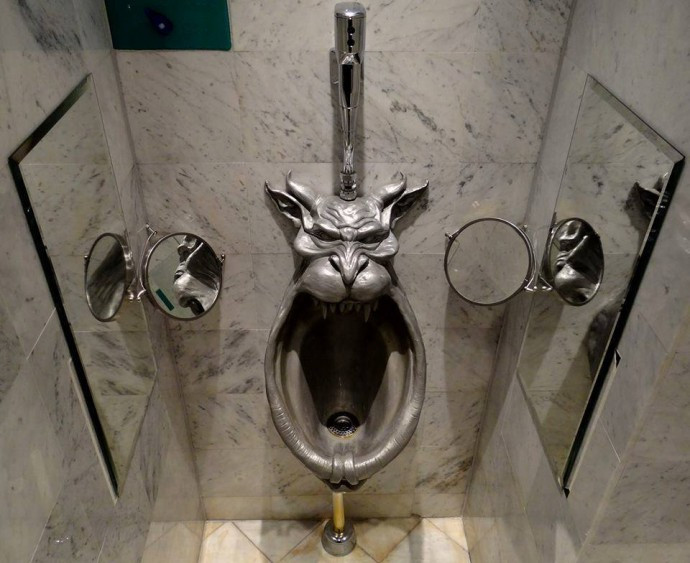 If you’re wondering what the hell The Mini Bottle Museum is, go here.

This next photo depicts a “black swallower” (Chiasmodon niger), a deep-water fish known for swallowing other fish up to ten times its own mass and twice its own length. Its jaw unhinges so that it can swallow prey that are larger than its own head, and it packs them into its greatly distensible stomach.

This particular specimen was discovered washed up on a beach in 2007. The fish in its stomach is a snake mackerel. As described in the place from which I lifted the photo, “Most specimens of this fish have been collected after one attempted to swallow prey too large for it to handle, and the prey could not be digested before decomposition set it. The release of gases forces the black swallower to the surface.” Yet one more reason why you should never eat anything bigger than your head. 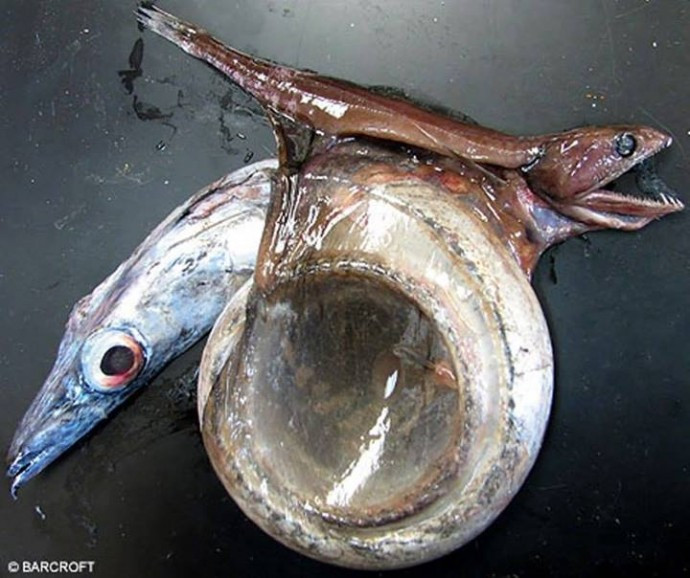 This, of course, is metal, because it’s brutal, disgusting, ravenous, and self-destructive, and also because “Black Swallower” would make a great band name or album title.

For more info about the black swallower, visit The Font of All Human Knowledge. (thanks to NCS reader jjthemick for tipping me to this godawful photo)

The next photo shows an item in the collection of The Metropolitan Museum of Art in New York City. It’s described as a lyre made in the 19th century from a human skull, antelope horns, skin, gut, and hair. I don’t think I have to explain why this is metal. 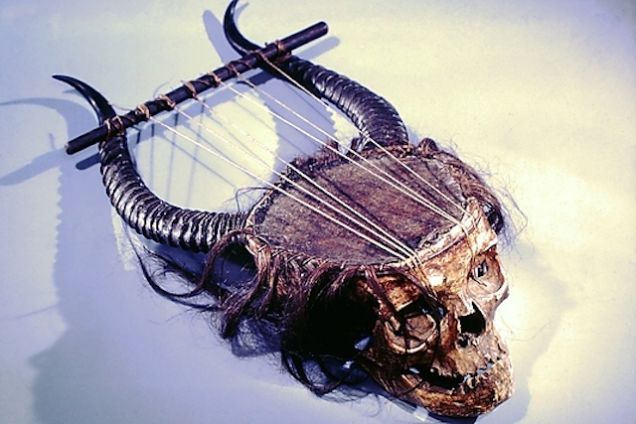 Here’s the complete description at The Met’s online collection:

“This unusual piece was purchased at the end of the 19th century and was originally thought to have come from South America when it was cataloged in 1906. It was eventually reattributed to Central Africa, although there is no known tradition to which this instrument may be assigned. Some have suggested that it may have been made for symbolic or clandestine ritual use, but most likely it is a sensational item made by a clever indigenous entrepreneur for trade and profit with Europeans in the 19th century.”

While we’re on the subject of historical artifacts that are metal, here’s a 19th century French treatise in the collection of Harvard’s Houghton Library that’s bound in human skin:

The book is Des destinées de lame (“On the Destiny of the Soul”) by Arsène Houssaye.  It contains a manuscript note claiming that the book was bound in skin taken from the back of a woman, since “a book about the human soul deserved to have a human covering.” The true source of the book’s binding stirred some controversy after other books at Harvard thought to be bound in human skin (see this) were proven to be covered in sheepskin. But analysis of microscopic samples conducted using peptide mass fingerprinting by the Harvard Mass Spectrometry and Proteomics Resource Laboratory demonstrated with 99% confidence that the binding is of human origin. Further details are available here.

I like my steaks with lots of peptide and salt.  You?

(via a link I received from Full Metal Attorney) 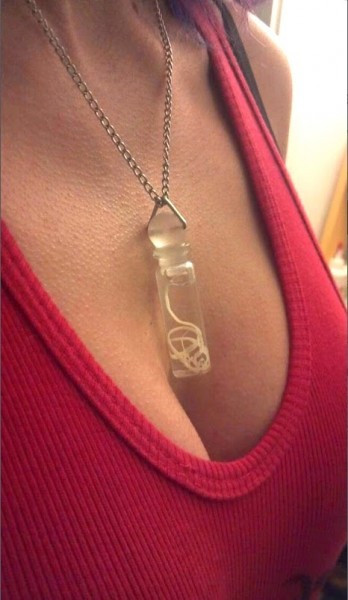 The necklace, containing a real preserved tapeworm parasite, is available for only $85 at… wait for it… MyParasites.

Okay, it’s time to play some hoops. And I don’t mean basketball.

The performer in the first of the following three hoops-related videos is Rachael Lust; she’s doing her thing to a song called “Groove” by Oiki. This gets better as it goes along — and it’s metal not only because this involves some impressive skills but also because it’s so well-choreographed to fit what’s happening in the music, just like moshing and headbanging. And also because of those Iron Man tights. At least I think that’s what she’s wearing. (Rachael’s FB page is here.)

The next hoops video was filmed on a street in Taipei during 2011 by CuriousWorldWanderer. The performer is Issac Wu (胡啟志). The show takes a little while to get going, but once it does, it’s beautiful. The execution is flawless, the physical control required is impressive, and the performance is graceful as well as jaw-dropping. “Graceful” isn’t exactly a word that comes to mind when you think of metal, but “awesome” is.

Okay, one more hoops video. This one is like a highlight reel from a festival in Thailand (which may be one of the Rocket Festivals practiced by ethnic Lao people). Since July 4th was only two days ago, this seemed like a good pick, though the “fireworks” technology displayed here is unlike anything you’ve seen at a Fourth of July celebration in the U.S. These rocket-powered hoops are huge, and when everything goes right, they reach astonishing heights, trailing impressive spiraling towers of smoke. When they fail, people run for their lives. That’s metal.

Okay, that Isaac Wu video was artistic and beautiful and all that, but on the metal depth chart it’s probably topped by this next one — because the next one is brutal and thoroughly ridiculous, and anyone who doesn’t believe metal can be thoroughly ridiculous just hasn’t listened enough yet.

DGR linked me to this video. It’s been around for a while, but I hadn’t seen it before, and so maybe you haven’t either. It’s 12 1/2 minutes of pure gold — “wall-to-wall bus and vehicle ownage”. (For a full list of film and tv clips used, click here).

The Terrible Thing of Alpha-9! from jake armstrong on Vimeo.

This ingenious and dark animation, entitled The Terrible Thing of Alpha-9, was made by Jake Armstrong as his 2009 graduation film for Manhattan’s School of Visual Arts. Let’s have a round of applause for Jake.

Next, I bring you The Rite of the Sitting Dead.

The story comes to us from New Orleans (but of course it does). This is a photo of Miriam Burbank, who died at age 53, taken at her funeral service at the Charbonnet-Labat Funeral Home on June 12, 2014. At Miriam’s request, her corpse was posed during the service “sitting at a table amid miniature New Orleans Saints helmets, with a can of Busch beer at one hand and a menthol cigarette between her fingers, just as she had spent a good number of her living days.” 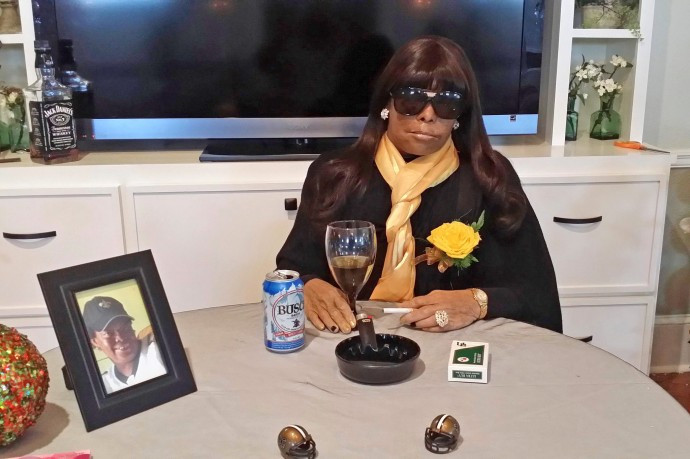 It didn’t take long for other people to start phoning funeral director Louis Charbonnet to ask how they, too, might avoid lying down at their funerals. It turns out that “Ms. Burbank’s service was the second of its kind that Mr. Charbonnet had arranged, and the third in New Orleans in two years.”

And there have been others elsewhere, most notably in San Juan, Puerto Rico. “Viewings there in recent years have included a paramedic displayed behind the wheel of his ambulance and, in 2011, a man dressed for his wake like Che Guevara, cigar in hand and seated Indian style…. This year, a boxer’s body was arranged standing in a ring, and an elderly woman was propped up in her rocking chair.” 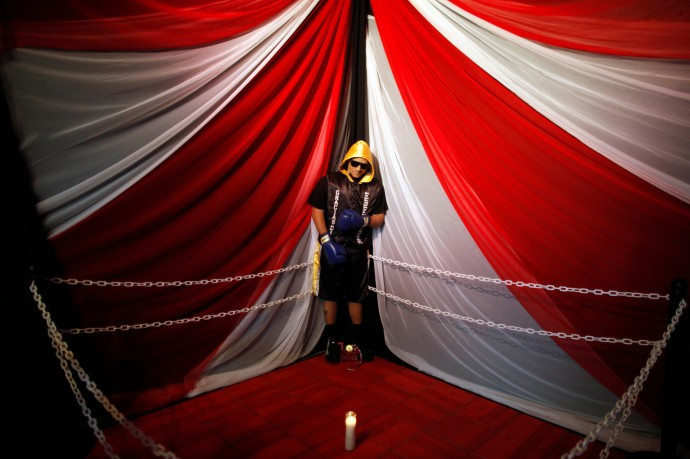 Boxer Christopher Rivera, who was shot to death, at his wake in San Juan.

More bizarre and hilarious examples and photos can be found at this location.

And now, to wrap up this edition of THAT’S METAL!, let’s take a look at a fireworks display filmed with a GoPro Hero 3 camera mounted on board a DJI Phantom 2 drone. In other words, a fireworks display as seen from above and within the show itself. Damned cool.

And that’s a wrap. As always, enjoy the rest of your fucking day.