Seidr’s massive double album Ginnungagap was released by Bindrune last fall. It was the first of the band’s music I had heard, but it was enough — the chance to hear Seidr live was one of the paramount reasons why I made the trip to Oshkosh.

The long songs evoked the sensation of a leviathan dragging its bulk to a final resting place, accompanied by stately dirges and the mournful keening of its kind. The slow, heavy chords and rippling lead guitar melodies were emotionally potent, as were the deep roars and rising howls of Austin Lunn’s vocals.

Lunn dedicated the final song to his father; the ninth anniversary of his death was on Saturday. As the compelling music neared its end, he stepped back from the mic but continued to pour out his soul so intensely that his shrieks could still be heard without amplification, and I think his face glistened with more than sweat.

There are lots of reasons to listen to live music, but the chance to experience emotionally searing moments like this one are at the head of the list. I was blown away. 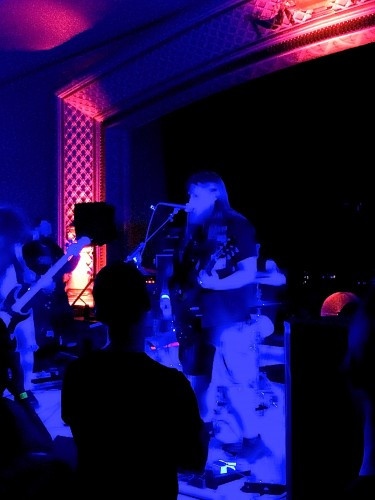 This Minneapolis black metal band have only released three songs in their brief career, but they’ve made a tremendous impact on this listener (and I’m certainly not alone in that respect). The recorded music is intense, but I still wasn’t prepared for the bleeding-edge impact of their live set.

The vocalist, Rachel, seemed utterly possessed, relentlessly pacing the stage and shrieking with such complete conviction and unnerving force that I was left in a state of physical and mental shock by the time the set ended. I’m not shitting you — chills went down my spine. I’ve rarely seen someone so completely throw themselves into such a harrowing display of soul-baring. The music was decimating as well — and the drum performance in particular was flat-out jaw-dropping; it was incredibly fast and precise and relentless.

Much of the set consisted of new material, and I understand that a new False release by Gilead is coming our way. Based on what I heard yesterday, it should be dynamite. 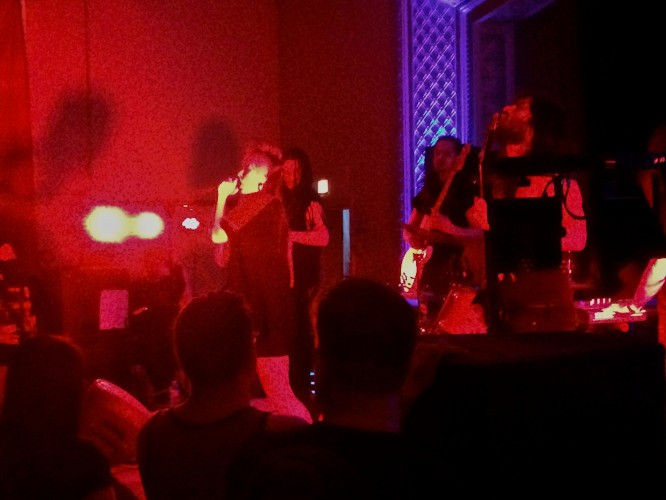 I knew very little about this Tennessee trio before seeing them yesterday, but they proved to be an excellent discovery — kind of a blend of sludge and post-hardcore, with physically convulsive riffs, memorable melodies, and convincingly enraged vocals. Their last album was 2011’s Howl and Filth, and I’ll be tracking that one down. 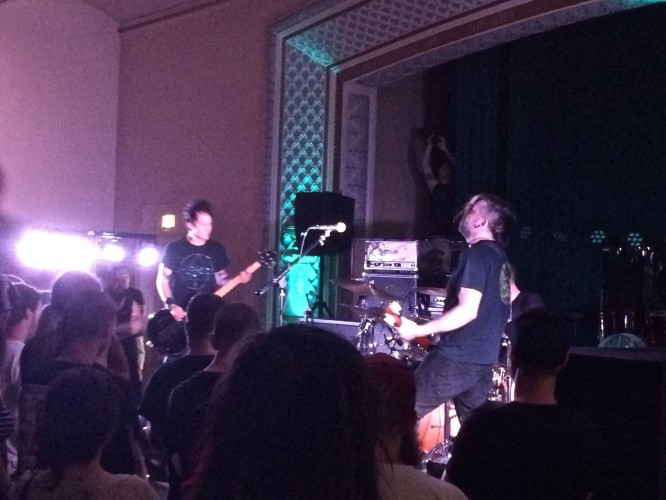 No band was ever better-named than Tennessee’s Loss. I had seen them once before in Seattle, and knew what was coming: About forty-five minutes of soul-splitting heartbreak delivered at the pace at which stone erodes. Mammoth vocals as deep as ocean trenches, aching melodies, enveloping power. 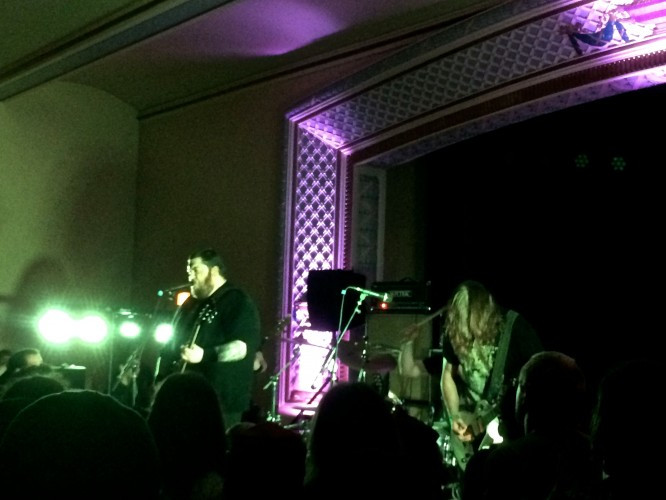 Uzala were another new discovery for me. They played as a three-piece, consisting of vocalist/bassist Darcy Nutt and vocalist/guitarist Chad Remains, both from Boise, and drummer Chuck Watkins from Portland. I heard they had made it to Oshkosh less than an hour before they were to begin performing, with not much sleep over the preceding 48 hours, but you’d never know it to watch the energy of their performance.

Darcy Nutt’s haunting wails took the vocal lead in most of the songs, the music ranging from trudging doom monsters to sludgy miasmas that put me in mind of a viper-infested swamp. For me the highlights of the set were Chad Remain’s guitar solos; the dude rang a riveting array of squalls, roars, and shrieks from that axe. 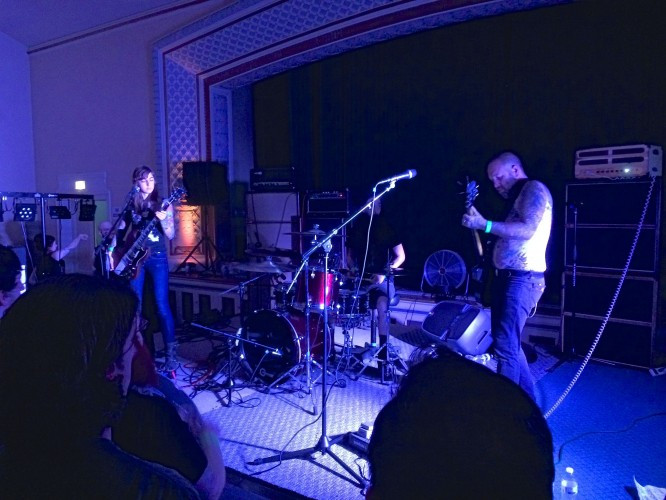 The most recent album by this Baton Rouge band, The Virtuous Purge, was released by Gilead Media in June, and it’s a ravaging assault of blackened death metal and doom. The phrase “takes no prisoners” comes to mind. And no prisoners were taken in their performance yesterday either. It was an unadulterated sonic maelstrom through which rippling tremolo melodies flashed like heat lightning or rose and fell like the heaving waves of a storm-driven sea. When the music slowed, the chords of doom groaned and moaned, the heavy chains of a drawbridge being raised — no escape. 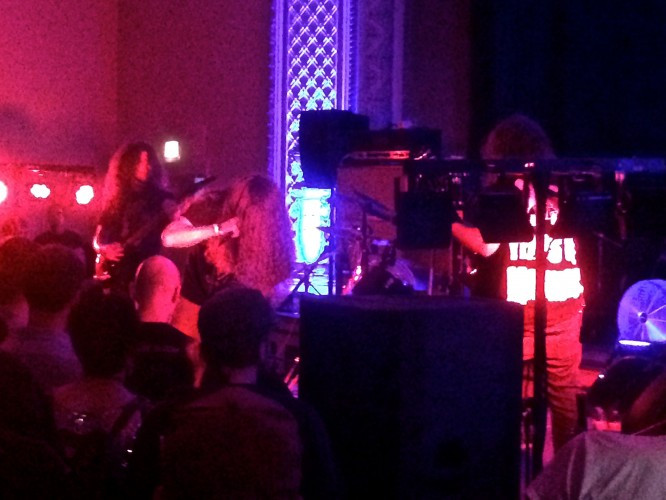 Imagine yourself a tower of sentient stone. Imagine yourself being methodically hammered into gravel with sledges and crowbars while your frozen face is etched in acid with the story of your future — and there is no future. The cosmos spins on and the celestial music of the spheres shimmers like star shine as the last of you crumbles to the earth.

Both utterly crushing and sublimely ethereal, Thou’s music makes you feel like you are nothing, and everything. There could not have been a better way to end a fantastic festival than Thou’s set. For me at least, the best had been saved for last — but it wasn’t quite the last. 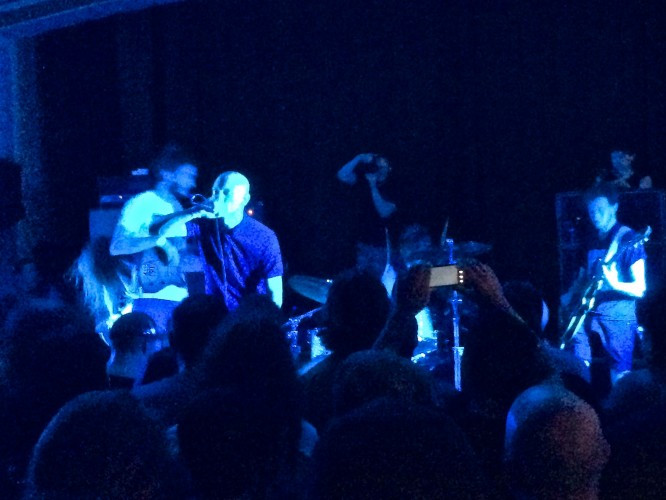 Because no one else was left to play after Thou, the totally enthusiastic crowd did their full-throated best to appeal for an encore. But the house lights came on, and it seemed the appeals would go unanswered. People began slowly filing out and I wandered over to Thou’s merch table to throw some cash in their direction. Vocalist Bryan Funck was already there, and while I was buying a vinyl copy of Heathen, I heard the sound of amps being cranked up again on stage.

My traveling companion and I looked back at the stage, where Thou was getting ready to do something further, and my friend asked the obvious question: “Wait… how are they going to do this when he’s sitting right in front of us (motioning to Funck)?”

And then we saw Gilead Media’s Adam Bartlett take the stage, and the band launched into “Smoke Pigs”, with Adam on vocals. If I hadn’t seen him grab the mic, I would have thought Bryan Funck had teleported back to the stage in a flash. Astonishing!

And after three days of good behavior, things got rowdy — with stage-diving, crowd-surfing, and a heaving mass of humanity at the front of the stage that seemed right on the verge of erupting into an actual mosh pit. As much as anything else, it was an outpouring of genuine gratitude to Adam Bartlett and everyone else who helped him mount an incredibly strong and incredibly memorable three days in Oshkosh.

I sure as hell hope this won’t be the last Gilead Fest.