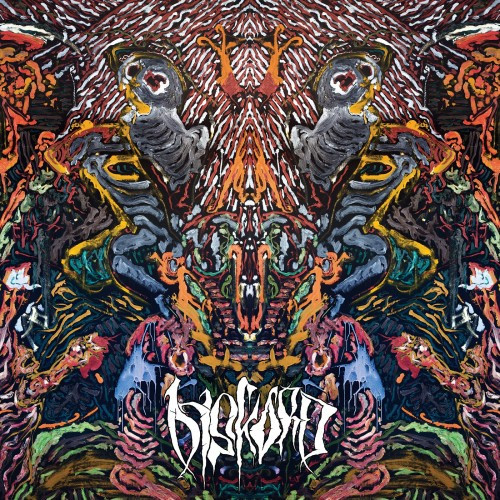 (In this post Austin Weber reviews the new album by Norway’s Diskord.)

For those not yet in the know, Diskord are a long-running death metal act from Oslo, Norway. Their last album, 2012’s Dystopics, caught my eye by way of a tip off from the then-editor of Invisible Oranges, Doug Moore. Ever since my initial exposure to it,  I have been hopelessly hooked on these guys and their unique and zany brand of death metal.

Diskord are firmly rooted in old school death metal, but the delivery comes across in a more modern way — revolving around a spastic, stop-start, blast-and-lurch approach. Although the production follows a natural and grimy old school death metal aesthetic, the music itself doesn’t squarely fit into the box of new old school death metal, at least when compared to the purely primitive manner with which other bands are delivering it. This is something else entirely, and to my ears, far more interesting. 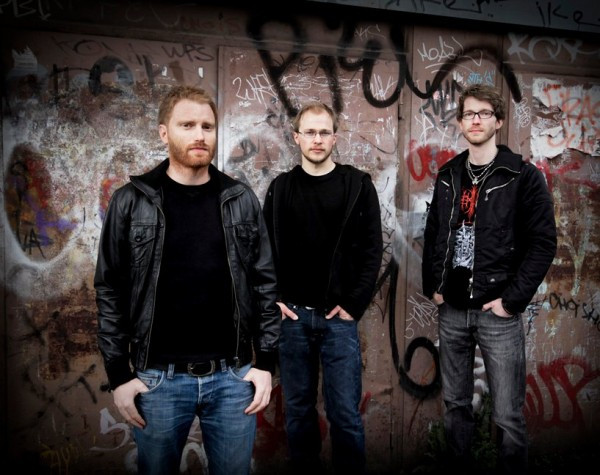 Their previous material sounded like a Frankensteinian, stitched-together bastard of old Gorguts, Demilich, and Atheist stewing in a cesspool of doomy pauses in the vein of Autopsy. For Oscillations they’ve kept the same framework of influences, but have stepped up their game, as it’s certainly more complex material this time around. Fortunately, the songwriting still retains its trademark manic, chaotic nature — the band writhing and thrashing about like newborn animals, blind and bereft of the indifferent world into which they are being born. By this point in their career, Diskord have their own sound and style that is recognizable and distinct, no small feat in today’s crowded metal scene.

Beyond their highly creative and unpredictable songwriting, Diskord have easily become one of my favorites due to the catchy and original riffs they cram into their music. The opening riff to “Horrid Engine” that kickstarts Oscillations proves this point right off the bat, with a heaviness and gait that would gladly sever your head. The theremin-laced introduction to “Hermits Dream” is another choice addition to Diskord’s repertoire. It creates an eerie, haunted atmosphere from which the rest of the song spirals forth, transmitting rage from the cosmos into a filth you can enjoy, should you be so inclined to enjoy music this thoroughly disgusting and acidic.

As mentioned earlier, their songs are constructed through various methods of combining and connecting cutthroat ferocity and swampy dirges, structured to give their music a strange bouncing feel, where the slow parts drip with hate and work to submerge the listener in a thick murk either before or after moments of blazing hysteria. Likewise, the fast parts that weave in and out gain a heightened sense of urgency and potency since they are dynamically juxtaposed with the many slower parts. There are no purely fast or solidly slow Diskord songs. All are miasmic mixes, the parts inseparable, thriving and propelling off of each other’s hot and cold energies.

In lieu of a standalone vocalist, drummer Hans Jorgen Ersvik performs most of the vocals, with additional vocals by guitarist Håvard Østli and bassist/theremin/electric upright bass player Eyvind Wærsted Axelsen. Together, their combined range of hoarse shouted howls, venomous screeches, and gravelly growls arm Oscillations with yet another weapon of fright and fear. They have a slight punk tinge to their delivery, and their placement is varied, often allowing the music to take center stage instead of mounting a permanent vocal attack every second.

The guitar-work and drumming are incredible feats in and of themselves, and yet I have to give credit to the band for allowing the bass playing to garner such a big slice of the mix, atypical not only for death metal but also most certainly even more so for old-school inspired death metal. The way in which Eyvind surgically twists in and out of their music is quite notable and distinctive, creating a counterpoint and lending an oddly funky dimension to Diskord’s music that magnifies the wonky and weird factor several times over.

Diskord have yet again managed to capture a suffocating atmosphere, stricken with sickness and weary human rawness, akin to the aura captured in early death metal, while simultaneously doing plenty to set themselves apart, refusing to become just another re-tread assault during these modern old school death metal revival times. Even before, Diskord were at a level far beyond human, and now, with Oscillations, they seem to have transcended not only genre boundaries, but the confines of flesh as well. They exist among the cracks in reality, guided by hidden horrors unknown to most in a realm where few have dared to venture. Oscillations is bestial discomfort refined, progressive while residing in primordial murky depths, an oasis for those who thirst for ghastly evil sounds, memorable riffs, and strange batshit insanity.

Diskord’s Oscillations will be released on CD and digital formats through Australopithecus Records/Hellthrasher Productions, on August 25. A vinyl edition is expected on September 2. Update: A full-album stream can now be heard at Invisible Oranges.

One Response to “DISKORD: “OSCILLATIONS””