Thanks to a tip from my friend Vonlughlio, I saw that yesterday Candlelight Records disclosed more details about the new album by England’s Winterfylleth, including the cover art you see above, the title (The Divination of Antiquity), and the release date (Oct 6 in the UK and a day later everywhere else). I also saw this quote by frontman Chris Naughton:

“The new songs really focus on the more melodic, passionate and expansive end of our spectrum this time around ,and we have also taken the opportunity to shine light into a few dark corners of our songwriting including some slower, doomier elements this time as well.”

I’m very eager to hear the new album. And because Winterfylleth is on my mind, here are covers of three old folk songs that Winterfylleth contributed to the Season of Mist compilation One and All, Together, For Home, released earlier this year (and thanks to NCS reader eiterorm for reminding me that I’d never written about these songs):

I’ve already explained (here) why every sentient being should listen to Panopticon’s new album Roads To the North, and it wouldn’t hurt for non-sentient beings to listen to it, too. Now everyone can, because yesterday it began streaming in full at NPR — here:

Canadian post-hardcore band KEN Mode released a new official video yesterday for a song named “The Promises of God”, which appears on their latest album Entrench (which is on Bandcamp). The song rips, and the video is really well done. It tells a metaphorical story, though I think its meaning is subject to differing interpretations. It features the band’s road dog Dale as the star, it was written and directed by the band’s old bassist Chad Tremblay, and it includes guest vocals by Dave Verellen from Botch and Narrows. Watch: 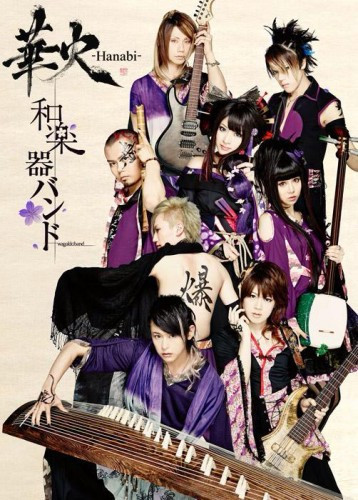 Our old Tokyo-based pal Phro seems to think it’s more important to write for Rocket News 24 these days than for NCS. In my opinion, the fact that they pay him in actual disposable currency and I only offer dried loris pellets should make no difference at all. Go figure.

Anyway, even though Phro doesn’t show up around here any more, he does occasionally send me messages, like the one this morning about a new forthcoming video by The Wagakki Band, who were first covered in our pages in this October 2013 post (again, thanks to a tip from Phro). They’re interesting in part because they combine traditional rock instruments with traditional Japanese instruments — including a tsugaru-jamisen (Japanese lute), a koto (Japanese harp), a shakuhachi (Japanese flute), and a taiko drummer. Until recently, they had only recorded covers of vocaloid songs, but now they’re recorded an original song named “Hanabi”, which means fireworks. The song will be released on August 27 along with a video.

In a new Rocket News 24 article posted today, Phro included a teaser for the song and video — a nearly three-minute “short version”, which is cool even though it’s less than the complete version. Near the end of the clip you’ll see a kanji character on a person’s neck. I asked Phro what it meant, and he said it’s an old-school way of writing the word for flower (“hana”), which is also part of the word for fireworks — which makes sense if you think about it. Check out Phro’s article (here) for more info about the band and the new song/video.