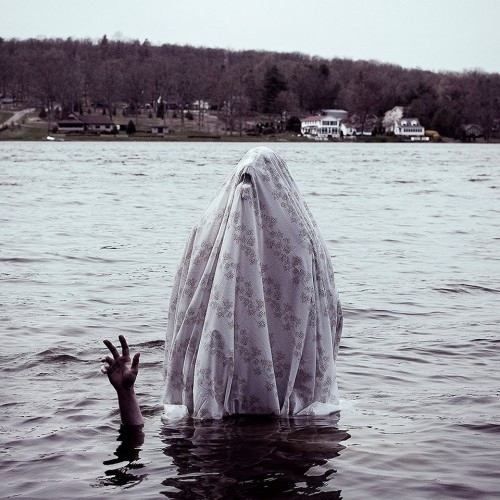 (DGR wrote this review of a new album with an arresting cover.)

Idylls are a punk group hailing from Brisbane, Australia, that I came across while wandering through different concentric circles on Facebook, bouncing from one band to another as I worked on my screed for a single song by The Fevered. They’re a dense and hefty combination of hardcore punk with a big emphasis on noise, and they have somehow managed to pack a saxophone into the mix — because if you ever needed an instrument to just have wailing notes that are as loud as possible, a saxophone can pack a ton of power into it.

I took note of them especially, because the group have a new album out known as Prayer For Terrene, which they released back in March, meaning this isn’t the most prompt review, but wow, what a find. There exists a pretty good-sized cross-section of punk, hardcore, and noise that I think appeals to heavy metal fans. The punk side of music is, admittedly, one or our blind spots at NCS, and when we do cover it we usually prefer it with artwork depicting bears with bandoliers strapped across their chests. 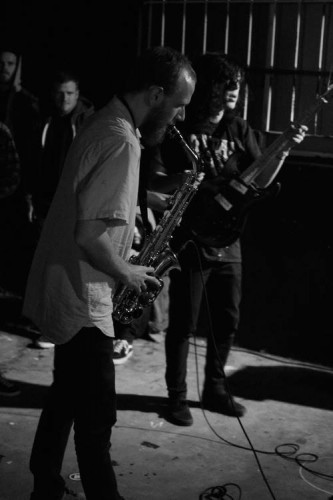 Usually the hardcore punk and noise side is the type that loans itself to spazzed-out live shows with the musicians just flinging their instruments around with reckless abandon, something that I fully support. Sometimes that cacophony reaches into the heavy metal echelon of sound and we find ourselves being drawn to the “fuck you” attitude of it, as well as the lo-fi feel to all of it. However, the occasional band does appeal enough that I think many of our readers will enjoy them and sometimes, sometimes you just want complete chaos in your music. Prayer For Terrene has that, and it dishes it out in spades.

Idylls actually pull a pretty interesting move with the start of Prayer For Terrene, by making its opening track, “LIED TO” (the band place their whole album in caps-lock typeset; I, mercifully, will not for the sake of this review), the longest song on the disc at almost seven minutes. Its run-time is longer than that of the combined three songs that follow it, which makes the flow of Prayer For Terrene real interesting. It has a sense of weeding out the weak, as “Lied To”, to put it politely, feels intentionally like a cacophonous mess of a track.

Not only do the band make a point of mentioning on their Bandcamp page that this whole thing was recorded live to tape, but the whole song is just this massive brick of static, noise, and music evocative of the sort of hardcore figuratively crashing into post-punk by way of the band Gospel’s sound. The ending of “Lied To” almost consists entirely of endless crashing cymbals, with massive guitar swings that move over the listener like a wave of sound — like the tides coming in.

This is one of those times, where I have to muse that I could never play in a band like this. People who do always impress me, because how anyone can keep track of where in the heck they are in a song, as everyone is just driving on their instruments to create as much sound as possible. I feel like I could probably do a better job trying to keep track of where in the hell I was in one of the more angular Gorguts songs out there. It’s like watching a wall come down.

That said, with all this talk of noise, the album is tracked well and you can hear everything clearly — including some rumbling bass guitar throughout all of Prayer For Terrene — with the song “Denigrating In The Tanks” being a big standout for having a fat, massive groove just slovenly laying itself on top of the song.

I feel like naming a song “Fagged Out To The Beach” is probably going to draw the band some unneeded attention; it could generate controversy were someone to seriously raise issue with it. I even found myself somewhat reacting to the title, even though the song is just a post-rock-and-guitar-effects freakout, heavy on the echo and chorus, that closes out “Lied To”.

The next song is the one tailor-made to appeal to the metal heads though, because its a fifty-nine second grind clusterfuck called “Sow Control” that starts at 110 mph and reaches plaid by the time the song finishes. It’s in the songs like “Sow Control” that the band really take their claws out and sink them into the listener, especially when the drums have moved into heavy blast territory, because then Idylls are playing death metal sans the conventional song structure and plus the absolute insanity of someone just seeing how far they can bend their instrument before it breaks in two.

The band definitely know when to peel back from the shrieking madness though, just enough to remind people that there are still songs happening, and those moments are usually driven by the bassist. One section in particular, during “Crashing Boar”, really stands out because the vocals are a babbling incoherent mess but the bass and drum combo are playing a pretty stripped down punk song — which is interspersed with random intrusions of musical psychedelia before it becomes a more conventional screaming punk mess at the end, familiar to people who’ve made it that far into the album.

Despite its non-traditional songwriting leanings, this album is still heavy as fuck. It’s a challenging disc and it is meant to be. It’s not the metrically heavy music that we usually grade bands by — where we can tell by the tuning of their guitars, the emphasis on double bass and blasts, and the gutteral growling that has come to define heavy metal. No, this is a disc that is designed to be heavy by just being a shrill and violent tantrum of sound.

If you were to cite anything as coming anywhere close to the more complex moments of Shining’s Blackjazz,  it would probably be Prayer For Terrene and its love of closing every song with either feedback or an instrument squeal. It’s a loud mess of a disc that could make just about any space feel suffocatingly hot; the soundwaves coming out of my radio speakers felt like they were heating the room ten-fold. There’s a real sense of the band’s live energy actually being jammed into these songs, and that is impressive.

With most bands there’s the idea that you have the studio version of a disc, and then the live version of that album, and the two experiences would seemingly be different. I don’t think that’s the case with Idylls and Prayer For Terrene. Instead, I feel it’s more of a what you see is what you get sort of scenario. The disc is a bundled and complex cacophony of sound and chaos, like getting caught up in a storm, and I imagine that, live, it would be the exact same thing. Sometimes that is what you need in your musical travels.

3 Responses to “IDYLLS: PRAYER FOR TERRENE”