(In this post TheMadIsraeli reviews the new album by India’s Demonic Resurrection.)

You know an album is good when you’ve had a hard time getting to the review because you keep listening to it.

I’ve blasted The Demon King by India’s Demonic Resurrection an absolute fuck ton of times.  It’s been about the only metal I’ve listened to in the last week or so (as evidenced by my Last.fm profile, if you were to look for proof).

It should be known by long-time NCS readers that anything spearheaded by Sahil ‘The Demonstealer’ Makhija we eat up like pigs eat slop.  This man knows his metal and is an astounding vocalist and magnificent songwriter, though I have to admit I’ve neglected the existence of his projects in the past.  Demonic Resurrection are an extremely tasty combination of death metal and thrash metal with some 90’s symphonic black metal cheese and power metal seasoning.  It almost feels like I’m listening to a combination of Death, Emperor, and Iced Earth.  It’s something that in theory shouldn’t work, but Demonic Resurrection have been rocking the sound for a while and it really makes them stand out. 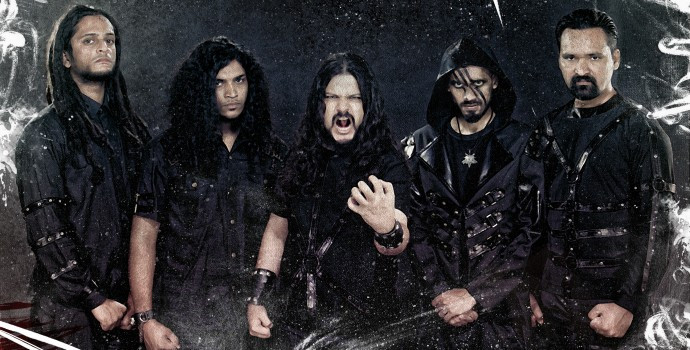 I don’t know whether it’s the straight-up killer 90’s flavor riffing, the endearing quality of the cheese in the synths, or the fact that the melodies in general on this album are irresistible, but I’m addicted.  From the torrent of distorted razor-sharp hail delivered by “The Assassination” or the ballroom dance of bleakness that is “The Promises of Never”, you’re being consistently hit with some absolute venom, even at the band’s lightest moments. Moments such as the chorus of “The Assassination”, a high speed galloping charge into battle with soaring clean vocals over it, prove as compelling as the showers of blackened writhing pestilence on songs such as “Trail Of Devastation”.  Regardless of what mode Demonic Resurrection are in, you can feel their sound eating away at your very essence like sonic acid.

Thrash metal also makes an appearance here and there, most notably on “Architect of Destruction” and “Shattered Equilibrium”, driven by high-intensity, intricate single-note riffs and frantic picking rhythms.  The thing that ultimately sticks out to me about this album, and this band in general, is their commitment to the unholy trinity of death, thrash, and black metal and the mixing thereof.  A lot of bands try to do this, but Demonic Resurrection are one of an elite few who actually manage to make the combination seamless, while giving all three styles the attention they deserve.  Often, when bands throw out the death/black/thrash hybrid tag, one style excessively dominates the sound and the other two are merely inserted into the music as changes of pace.  Demonic Resurrection actually accomplish an organic-sounding integration that bridges all the gaps.

I’m still listening to The Demon King, even now as I’ve been writing this.  Definitely, DEFINITELY a glorious album of savage majesty.  I’m also digging the reserved 90’s style mix while I’m at it.  You should check this out, and check out the rest of Demonic Resurrection’s discography as well.

When mentioning albums as contenders for among the best of the year, I normally say that “tentatively” or “probably so”, but The Demon King IS unqualifiedly one of the best albums of this year so far.  And here I was thinking my year-end list was going to be pure tech death.

Lyrically, The Demon King is a complete narrative that tells the story of the rise of a demon king and the futile war waged against his forces by humanity, and ultimately by God. The album is out now and can be acquired via the links below.