Here are a trio of discoveries I made last night and early this morning that I believe will be worth your time.

The next album by Britain’s Winterfylleth, The Divination of Antiquity, will be coming our way via Candlelight on October 7 (October 6 in the UK). I’ve been very eager to hear the new music. The first single from the album, “Whisper of the Elements”, was released on August 5, and this morning a lyric video for the song got its premiere.

The music is beautiful, intensely melodic and atmospheric, more so than anything the band have done before, and the nature-cenric lyrics well suit the dramatic emotional power of the sounds. Listen next…

Here’s what first got me excited about the new album from Maine’s Falls of Rauros (in addition to the strength of their previous releases): Last December, Panopticon’s Austin Lunn wrote a year-end-list piece for us (here), describing some of his favorite releases from 2013. At the end of his article, he also had a few words about forthcoming releases. He wrote this about the new Falls of Rauros album:

“I got this album from the guys last week. I have listened to it over 30 times at this point. I make no secret about my feelings about this band… they are my favorite current American band… but this album… this may be my favorite record ever. This album is so heartbreaking… an achingly personal, specifically American record… drenched in North American folk, depressive rock, and Alt Country… haunting steel Guitar, pearly clean guitar tones, raging metal, blazing guitar solos, passionate vocals, thundering drums… all with a perfect, vintage sounding production… this record will be played and played throughout my life. Amazing. Simply Amazing.”

The album is Believe In No Coming Shore. It will be released later this year by Bindrune Recordings in the U.S. and by Nordvis in Europe. Yesterday we got our first taste of the music, through the debut of a long song named “Ancestors of Smoke”.

And actually, much of what Austin wrote about the album as a whole could stand as a review of this gripping, multifaceted song (except I would also mention that the bass work is also great). It completely swept me away, and I really can’t wait to hear the rest of the album. 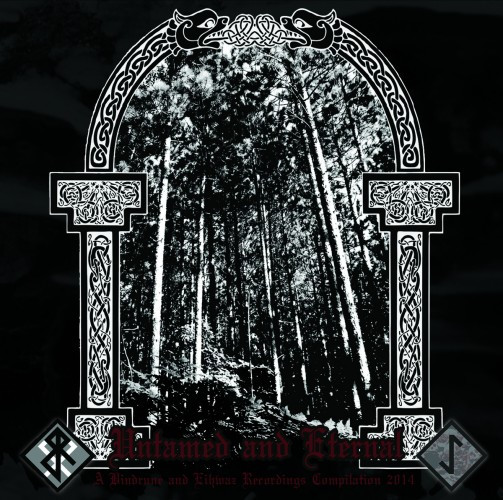 UNTAMED AND ETERNAL: A 2014 COMPILATION

While I’m on the subject of Bindrune Recordings (and Falls of Rauros), here’s something else that happened last night: Bindrune and its sister label Eihwaz Recordings released a compilation of music entitled Untamed and Eternal that’s available on a “pay what you want” basis via Bandcamp. Thus, this goes in the category of Free Shit, because you could pay zero — but if you get as stoked about this comp as I am, a donation would be generous.

Here are the details: This digital release includes music from 12 bands, including the afore-mentioned Falls of Rauros as well as Panopticon, Nechochwen, Vex, Ahamkara, Unwilling Flesh (whose debut album I reviewed yesterday along with a track premiere), Infirmary, Coldfells, Waldgefluster, Seidr, Aetherium Mors, and Infera Bruo. The comp includes two Nechochwen tracks, one of which is new and exclusive to this compilation.

I suspect many of you are already familiar with at least some of these bands, but this release provides a great way to discover all of them. And it also makes for a damned fine playlist for your coming weekend. I’ve included the full Bandcamp stream below, and you can go here to get it:

7 Responses to “SEEN AND HEARD: WINTERFYLLETH, FALLS OF RAUROS, UNTAMED AND ETERNAL (A BINDRUNE / EIHWAZ COMPILATION)”