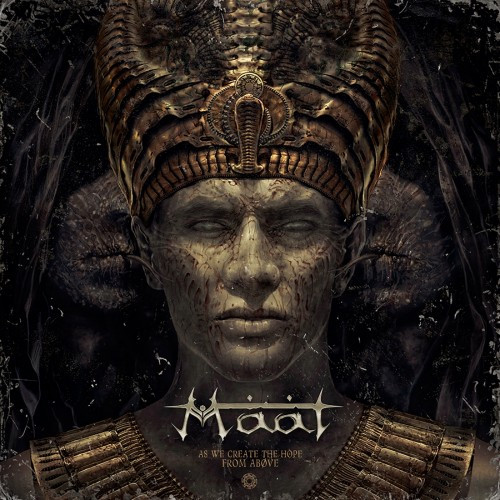 (In this post Ty Lowery reviews the debut album by Germany’s Maat.)

Serendipity can be a powerful thing. A few months ago, I was deep in the bowels of YouTube, having started by listening to some random band’s EP (I think). Either way, I wound up listening to a song called “Atum / Conqueror of Chaos”. It was a pretty good song. I listened to it, marked the cool album cover in my head and vowed to look up the band later.

Naturally, I forgot all about them. Even in my search for my favorite album covers (see here), I couldn’t find the pharoah’s stony stare to save my life. Oh well, life goes on.

Fast forward to earlier this week, while I was on a quest to find some black metal that I didn’t hate… Imagine my surprise when I saw the song sitting in a recommendations list on a random forum. I found the album (As We Create Hope From Above), realized it had been released, and opened wide.

Maat are a German death metal band from Berlin. As their name would suggest, they are inspired by Egyptian mythology and eastern music in general. Touches of this inspiration are found all over the album, but are made exceptionally clear on “Preservation of My Immortal”. The sitar (at least I believe it’s a sitar) interlude that leads into the second half of the song is haunting, and having the guitar pick up the melody and take it to a solo is a downright terrifyinglyly smart move.

Naturally, a band with this mystique will be compared to Nile, and while not as technically robust as Nile’s discography, these guys aren’t playing lullabies by any stretch of the imagination. The album is packed with heavy hitters. Guitarists Morguloth and Scaradeus wear their inspiration on their sleeves, echoing the squealing sentiments of both the aforementioned Nile as well as the exuberant riffage of Behemoth, and even the churning buzzsaws of the death metal giants of yesteryear. The fretwork between the two alternates between ravaging riffs and the sonic wizardry present in a great number of tech-death-metal bands, including, of course, Nile.

The drums drive the band forward in a feverish gallop through the majority of the album at an unrelenting pace. But, luckily for the listener’s eardrums, it’s not all blast beats. The knowledge of both the technique and when to slow the beat is something of which many death metal drummers are incapable. Tempest is one such drummer. Multiple occasions of pristinely placed tribal polyrhythms provide the perfect break in all the madness.

From top to bottom, Maat offer a great death metal album. There’s just enough Egyptian flavor added to the songs to give it variety, not a gimmick. From the moment vocalist Thot shouts “GO!” on “As We Create The Hope From Above”, the band doesn’t stop. This being their first full length release, it makes me really excited to see where these guys take their music from here.

5 Responses to “MAAT: “AS WE CREATE THE HOPE FROM ABOVE””