Horned Almighty know what they want, and they know how to make it happen. From the shit-kicking swagger of the album’s title track — replete with pumping, jackhammer riffage, brutish, bellowing vocals, and rib-cracking drum work – through to the ominous grind and blackened groove of closer “Blessed By Foulness”, the Danish deviants unleash a sickening torrent of rabid hostility and ugly misanthropy over a chaotic cacophony of pustulent riffs, choking bass-lines, and neck-snapping drums.

The band’s sound, a thrashed-up and scathingly savage form of Black Metal, delivered with a perverse, punkish energy and a rumbling, clanking Death Metal backbone, is instantly recognizable and instantly gratifying, and picks up pretty much right where their previous album, the damningly aggressive Necro Spirituals, left off.

If anything, World of Tombs might even be a little darker and a little more depraved than its predecessor, immediately grabbing the listener by the throat and proceeding to drown their screams and struggles beneath a torrent of blackened bile and metallic filth. It’s undoubtedly ferocious and pestilentially infectious, and utterly, unrepentantly, nihilistic to the core. 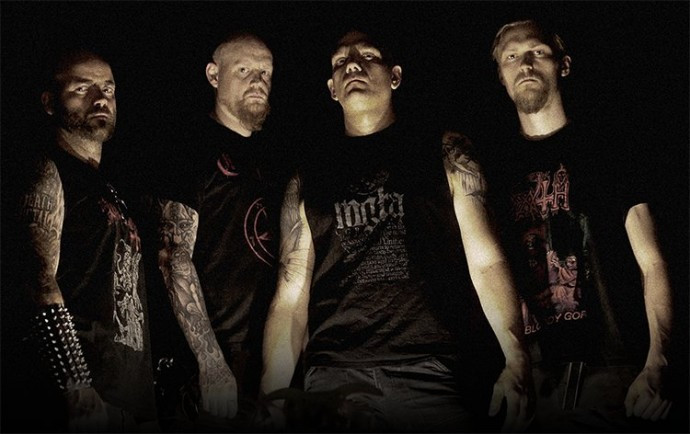 If you ever wondered what might happen if you locked members of Mayhem, Autopsy, and The Misfits in a room together with nothing but a bunch of instruments, knives, and high-grade methamphetamines, then wonder no more, as it’s likely you’d get something pretty damn close to the chaos-infused racket put out by Horned Almighty.

The pedal-to-the-metal black thrash attack of “Diabolical Engines of Torment” fuses murderous metallic rage with touches of sludgy dissonance and decayed melody, while the militant death march of “Unpure Salvations” unleashes barrage after barrage of weaponised aggression with its monstrous, stomping chorus and sudden eruptions of blasting insanity.

The death-punk swing of “Plague Propaganda” is a blitzkrieg bop of blasphemy and brutality, mixing filth-drenched riffs and searing, cyanide-laced tremolo melodies into an ugly, diseased morass of infectious grooves and seething hatred, followed up by the thrash-injected frenzy that is “Of Flesh and Darkness”, whose rage-fuelled muscle and gnawingly addictive, narcotic rhythms land it somewhere between early Entombed and latter-day Goatwhore, only with more demonic rage.

“In Torture We Trust Pt. II” is a methodical ground-and-pound assault of sledgehammer riff-bombs and scathing, blackened blasting, topped off with an unexpected dose of eerie melody, leading into the stabbing guitar work and deathly intensity of “This Unholy Dwelling”, a savage, back-alley knife-fight of murderous Black Metal madness, packing an abattoir’s armoury of rusted, razor-edged hooks and slicing, serrated riffs into a lethally efficient package.

The sickening strut and sadistic sneer “Blessed By Foulness” closes the album and that, barring a grim, guerilla warfare-style cover of Autopsy’s “Twisted Mass of Burnt Decay”, is all she wrote. The fat lady has sung, and then been strangled with her own disemboweled intestines. It’s all over, time to bury the dead and rack up the body-count.

Because really, when an album like this comes along you only get two options: run and hide, or join in with the depravity.

My advice is to get down deep in the blood and the filth with the rest of us.

World of Tombs was released yesterday by Scarlet Records. You can order it on digipack CD here, and it’s also on iTunes. Check out two songs below.